A brightly painted Los Angeles house featuring two large emoji symbols is a form of "bullying," according to someone who wants the city to take action against the building's owners.

What began as a dispute between neighbors in the city's El Porto neighborhood is threatening to become a First Amendment showdown. The Los Angeles Times reports that the pink "emoji house" was the subject of complaints during a Tuesday city council meeting, where some locals called for legal action against the mural. According to the Times, the bright pink paint job and emojis—one of them with its tongue sticking out and another with a zipper over its mouth—were added to the house in May, after neighbors complained about illegal short-term rentals at the property and the city fined the homeowner $4,000. 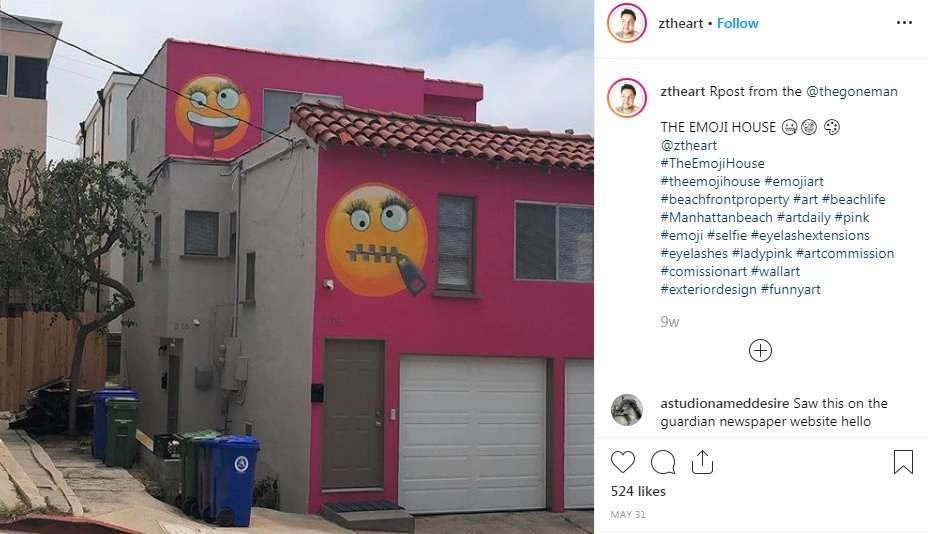 Susan Wieland, one of the neighbors who complained about the house to the city council on Tuesday night, tells the Times that Los Angeles officials are not doing enough to protect residents from the house's silly faces.

"And we really feel it is our city's responsibility to have these regulations in place because people can do anything," Wieland said. "That's the most frightening thing. I feel like we're not being protected against bullying."

Painting your house—even doing so in a way that's deliberately intended to get under a neighbor's skin—is hardly an act of bullying.

It also happens to be protected by the First Amendment.

"I think it's scary when a small group of people thinks they can use the coercive power of government to get rid of anything they don't like," says Jeremy Talcott, a property rights attorney with the Pacific Legal Foundation. "The homeowners here seem convinced that their distaste of a particular choice of paint is enough to justify government action, and that's just not so."

Talcott should know. He was the lead attorney in a case that bears more than a passing resemblance to the "emoji house" situation. In 2016, the town of Mount Dora, Florida, imposed more than $10,000 in fines against a couple who painted their house to resemble Vincent van Gogh's masterpiece Starry Night. The town ended up on the receiving end of a legal butt-kicking—the mayor made a public apology and the town paid $15,000 to the homeowners. This settlement was reached after a judge made it clear the town wasn't likely to get the First Amendment overturned just so it could continue its overzealous code enforcement.

As far as the Los Angeles neighbors' complaint about bullying goes, Talcott says nuisance laws likely wouldn't apply. Though there might be a point where a paint job crossed that line, "nuisance" as a legal concept is about protecting harm to neighbors or the public, not about removing annoyances, he tells Reason. The intent behind the paint job would not be relevant to whether it could be considered a nuisance or obscenity.

If the city takes action in Los Angeles, that would be even more egregious than what happened in Mount Dora, because officials wouldn't even be enforcing existing law—they'd be drafting new regulations specifically targetting the emoji house.

According to the Times, the city's planning commission is now researching how to take action against murals and art on private buildings in residential neighborhoods.

"Clearly, they would be acting with the intention of suppressing this individual's specific mural and viewpoint," says Erica Smith, an attorney with the Institute for Justice, a libertarian law firm that is in the midst of fighting another similar legal battle—this one against a North Dakota city that wants to paint over a mural on the back wall of a bar.

"That is a serious constitutional problem," Smith tells Reason. "They would be just asking to get sued."

CORRECTION: This piece originally identified the location of the I.J. mural lawsuit as being in Virginia. It is challenging a law in Mandan, North Dakota.