A former Florida sheriff's deputy was arrested Wednesday for planting drugs and falsely arresting at least 10 people, including one case where Reason obtained body camera footage showing him lying about the results of roadside field test.

In a stunning 30-page affidavit, the FDLE laid out how Wester kept unmarked bags of marijuana and methamphetamines in the trunk of his patrol car, manipulated his body cam footage, planted drugs in people's cars, and falsified arrest reports to railroad innocent people under the color of law. His victims, many of whom had prior records or were working to stay sober, had their lives upended. One man lost custody of his daughter.

"There is no question that Wester's crimes were deliberate and that his actions put innocent people in jail," Chris Williams, the FDLE's assistant special agent in charge, said in a press release.

The Jackson County sheriff suspended Wester last August; it fired him after body camera footage, first reported by the Tallahassee Democrat, appeared to show him planting a baggie of methamphetamines in the car of Teresa Odom. After Wester's credibility was destroyed, the local state attorney's office dismissed more than 100 criminal cases where he was the primary or sole officer, and a judge vacated eight more criminal convictions.

Wester pulled over Vann on April 17, 2018, for allegedly crossing over the center line. Although the body camera footage mysteriously starts in the middle of the traffic stop, it shows Wester rummaging through Vann's car before appearing to find a small plastic bag.

"Honesty is going to go a long way with me," Wester tells Vann, holding up the baggie. "Have you ever seen this before?"

"The center console," Wester says as he walks back to his patrol car to perform a roadside test of the baggie for methamphetamines.

"There ain't no way, man," a distraught Vann says. "Oh my God, you gotta be fucking kidding me." 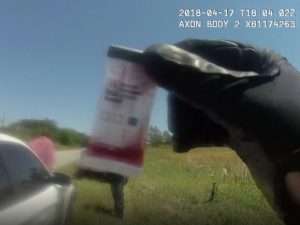 The field test that Wester used is supposed to turn bright blue almost immediately to indicate a positive result for methamphetamines or MDMA, but it instead turned a muddled red, despite Wester continuing to shake it for several moments.

Nevertheless, Wester can be heard saying "blue" on the video as he stares at it. He then walks back to inform Vann, who by then is in tears, that the test came back presumptive positive for methamphetamine.

Vann was subsequently charged with possession of methamphetamines and paraphernalia, but state prosecutors later dropped those charges as part of a review of more than 250 cases that Wester was involved with.

Things turned out worse for some of Wester's other victims, such as Benjamin Bowling. In October 2017, Bowling and a woman were driving to a store to buy diapers when Wester pulled them over for allegedly having inoperable tag lights and swerving over the center line. Wester said he smelled marijuana, and the woman gave him permission to search the car.

As in other cases, Wester reported that he discovered three small baggies that tested positive for methamphetamines. Although he reported that his body camera was active during the stop, investigators found no footage of it. The FDLE describes what happened next:

At the time, the Department of Children and Families had awarded Bowling custody of his daughter, and he consistently submitted to drug testing. Bowling was adamant he had been clean since was released from prison for a DUI conviction. Furthermore, Bowling voluntarily took a drug test after he was arrested and it was negative. Bowling contacted the Sheriff's Office and requested that the drugs were tested for DNA and fingerprints. Bowling also requested the body camera video but never received it. Bowling lost custody of his daughter because of the arrest.

After Wester was suspended, internal affairs investigators searched Wester's patrol car and found two plastic containers hidden in his black tactical gloves. One contained an unused test kit with methamphetamines already in it. The other contained a small plastic baggie that also tested positive for meth. Investigators also found unlabeled evidence bags with marijuana and meth in the trunk, as well as dozens of pieces of drug paraphernalia.

In addition to criminal charges, there are also several federal civil rights lawsuits pending against Wester and the Jackson County Sheriff's Office.

The prosecutor who first flagged some of Wester's suspicious cases has since quit the state attorney's office and filed a whistleblower retaliation complaint against her former employer, saying she was "ostracized and ignored" after bringing Wester's misconduct to light.

One question that has yet to be answered is why Wester framed people.

"You're never certain of the ways of the heart of man," State Attorney William Eddins of the 1st Judicial Circuit said in a news conference Wednesday. "We have some ideas and some theories, and we've talked about that a lot. But I do not feel that it would be appropriate to go into it in any detail at this time."

The FDLE's investigation into Wester is still ongoing.