Reason is supported by:
Michael Mazzuchi

The ties that bind President Donald Trump and Jeffrey Epstein, the Florida billionaire arrested this week for alleged sex crimes against teen girls and young women, have been getting a lot of understandable scrutiny. Trump and Epstein partied together in the 1990s, reports Business Insider, and he told a reporter in 2002:

He's a lot of fun to be with. It is even said that he likes beautiful women as much as I do, and many of them are on the younger side. No doubt about it—Jeffrey enjoys his social life.

But White House advisor Kellyanne Conway said the friendship between Epstein and Trump ended long ago. They haven't had contact "in years and years and years," said Conway. "And [Trump], like everyone else, sees these charges, the description of these charges against Epstein, as completely unconscionable and obviously criminal. Disgusting, really."

Trump himself stressed to reporters that while he knew Epstein at one time, he hasn't been associated with him for many years.

The New York Post alleges that Trump even had Epstein banned from Mar-a-Lago over his predatory behavior, citing an April 2011 court filing in a Florida case between Epstein and lawyer Bradley Edwards. "Trump allegedly banned Epstein from his Maralago Club in West Palm Beach because Epstein sexually assaulted a girl at the club," the New York Post quotes an unspecified document as saying. (I've been through the April 2011 filings in the Epstein-Edwards Florida case and been unable to find this particular statement, however.)

Update: New York Post reporter Priscilla DeGregory points me to a bankruptcy case for the now-defunct law firm of Rothstein Rosenfeldt Adler. An April 2011 filing from that case contains as an attachment a "Statement of Undisputed Facts" from September 2010 in the Epstein-Edwards case in Palm Beach County. That document says Edwards wanted to interview Trump as part of his research into claims against Epstein, since "message pads confiscated from Epstein's home indicated that Trump called Epstein's West Palm Beach mansion on several occasions during the time period most relevant to [Jane Doe] complaints"; Trump had "allegedly banned Epstein from his Maralago Club in West Palm Beach because Epstein sexually assaulted an underage girl at the club"; one of the Jane Does accusing Epstein said she "was initially approached at Trump's Maralago…and recruited to be…Epstein's underage sex slave"; and "Epstein's phone directory from his computer contains 14 phone numbers for Donald Trump, including emergency numbers, car numbers, and numbers to Trump's security guard and houseman."

Trump has also been taking heat for his labor secretary, Alexander Acosta, being the U.S. prosecutor that allowed Epstein's incredibly lax plea deal in Florida in 2008. Acosta was quiet in the days immediately following Epstein's July 6 arrest, but tweeted on Tuesday:

"The crimes committed by Epstein are horrific, and I am pleased that NY prosecutors are moving forward with a case based on new evidence.

With the evidence available more than a decade ago, federal prosecutors insisted that Epstein go to jail, register as a sex offender and put the world on notice that he was a sexual predator.

Now that new evidence and additional testimony is available, the NY prosecution offers an important opportunity to more fully bring him to justice."

It's unclear to what new evidence he refers, considering the current indictment against Epstein lists the same old complaints from 2002-2005 that informed the 2008 case.

But some people aren't satisfied with criticizing Acosta's actions back then (or his defense of it now) and seemingly want to make him into a supervillain. The Guardian is running a silly story about Acosta trying to "slash funding to anti-sex trafficking agency by 80%."

The twisted impetus for the newspaper's claim is that 2020 budget plans for Department of Labor would slash the budget of the International Labor Affairs Bureau from $68 million to $18.5 million. "The proposed reduction is so drastic that experts say it would effectively kill off many federal efforts to curb sex trafficking and put the lives of large numbers of children at risk," the Guardian insists. Notably, it does not offer any specifics on what budget cuts would mean for any particular programs, instead letting us know that congressional Democrats say it will be bad.

In my five-plus years reporting extensively on U.S. efforts to fight sex trafficking, I've hardly ever encountered any mentions of the International Labor Affairs Bureau. Most of the human rights work it does concerns forced labor in sectors like agriculture and manufacturing. Whatever this agency may be doing to combat sex trafficking, it is far from a central front in the feds' fight.

Meanwhile, there are dozens of other agencies and initiatives devoted to fighting sex trafficking, and federal budgets for these entities have continually increased. For instance, according to the State Department's latest Trafficking in Persons Report, Department of Justice funding for federal-state anti-sex trafficking task forces soared from $2.8 million in fiscal year 2017 to $23.1 million the following year.

Sen. Tulsi Gabbard (D–Hawaii) accused Sen. Kamala Harris (D–Calif.) of pulling a "political ploy" with her debate-stage attack on Joe Biden for his opposition to federally mandated busing—a position Harris herself later admitted to holding. (Her campaign tried to get around the discrepancy by pointing out that it's a different year than when Biden opposed it.)

"Really what she's saying is her position is the same one she was criticizing Joe Biden for," Gabbard told CBS News. "So this is just a political ploy and I think a very underhanded one just to try to get herself attention, to move herself up in the polls. I think we need to be above that. All of us."

Prince versus Andy Warhol winds up in a good ruling for Fair Use. From Mike Masnick at techdirt: 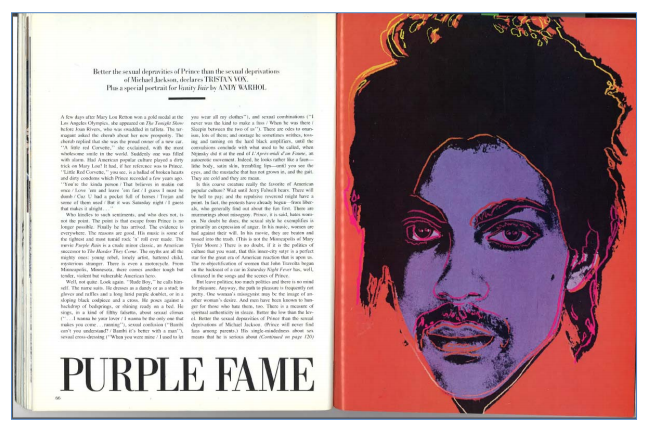 Apparently Warhol actually created a bunch of paintings based on Goldsmith's photographs, most of which have been sold, and a few of which are now in the Warhol museum. You can see all the images in the original complaint in this case.

After Prince died, Vanity Fair reran its article, and then teamed up with some other Conde Nast publications, and put out a special magazine called "The Genius of Prince" using one of Warhol's other portraits."

The court's ruling? "It is plain that the Prince Series works are protected by fair use." More here.

Hawaii decriminalizes marijuana. Hawaii has joined 25 other U.S. states in either decriminalizing or legalizing cannabis, with a law that will take effect in January 2020. "The new law removes the possibility of jail time as a penalty for up to three grams of marijuana, but maintains a $130 fine," reports Vox.

"Unfortunately, three grams would be the smallest amount of any state that has decriminalized (or legalized) simple possession of marijuana," notes the Marijuana Policy Project. "Still, removing criminal penalties and possible jail time for possession of a small amount of cannabis is an improvement."

Cummings said Amash had been fair to Dems on the cmte