A concentration camp by any other name…Over the past 24 hours, American media has become embroiled in an intense debate over how to refer to government-run facilities for the detention of Central American migrants seeking refuge here and those caught crossing our southern border without permission. Are they "detention centers" or "concentration camps"? And how much does it really matter what we call them?

In a live video yesterday, Rep. Alexandria Ocasio-Cortez (D–N.Y.) said unequivocally that "the U.S. is running concentration camps on our southern border" and that "we need to do something about it."

The term concentration camp technically refers to any "camp in which people are detained or confined, usually under harsh conditions and without regard to legal norms of arrest and imprisonment that are acceptable in a constitutional democracy" (that's from the Holocaust Museum). These days, however, the term evokes only one thing for many Americans: Nazi death camps during the Holocaust.

That's why a lot of folks—including many Democrats—insisted that using "concentration camps" to refer to facilities run by U.S. immigration authorities just muddies the proverbial waters, creating a needlessly charged environment under which we must consider some very serious and real problems. For instance, here's MSNBC host Chris Hayes: 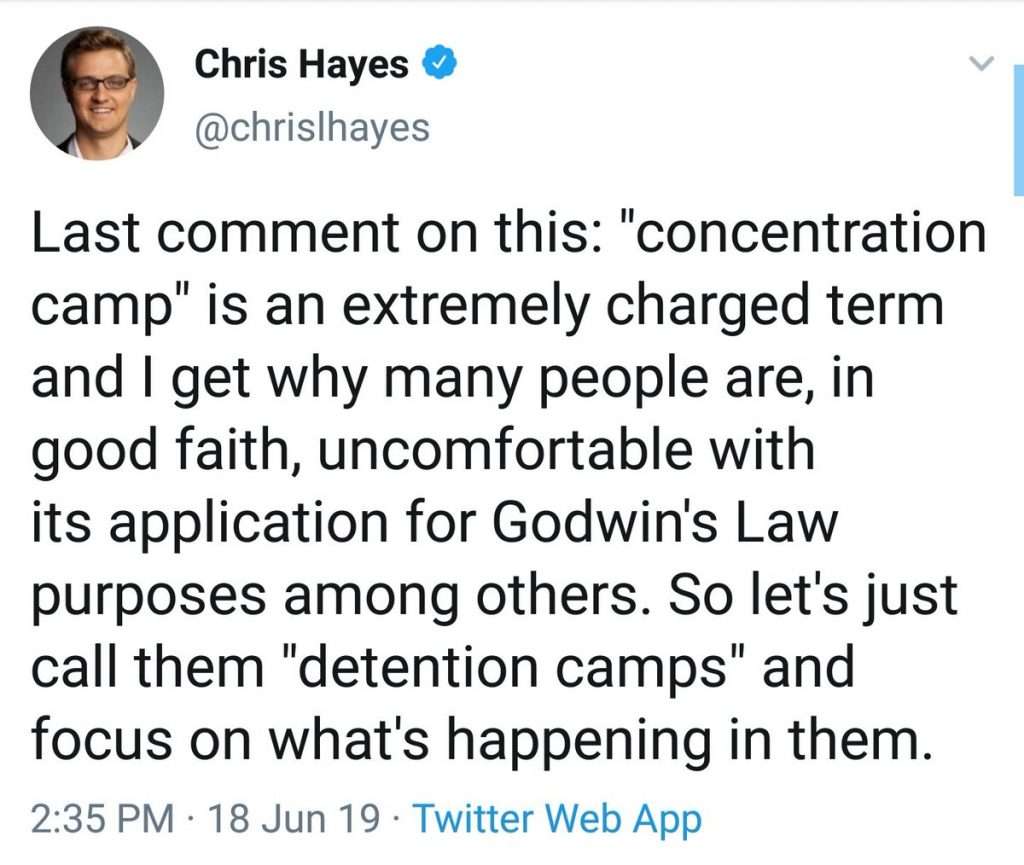 Others opposed to using "concentration camps" clung to the technical differences between the identity-based detention orders that landed German Jews and other minorities in places like Auschwitz, and the infractions resulting in the detention of refugees and undocumented immigrants here.

But some pointed out that the identity/criminality distinction was not, historically, as clear cut as we may see it from our modern vantage point.

"For many Germans, the concentration camps were not seen as part of a program of political and racial terror, but a sensible policy, which sought to deal with the problems of uncontrolled immigration of Jews from the East and with the socially and politically deviant," tweeted historian Ned Richardson-Little.

Although Nazi propaganda emphasized a world Jewish conspiracy that posed an existential threat to the racial purity of the "Aryan" people, there was also an extensive effort to link Jewishness to problems of everyday criminality.

Others suggested that American has already lost its moral footing when our denial of having concentration camps turned on technicalities.

You know America is going to hell in a handbasket when people are debating the sematics of what constitutes a concentration camp.

Those siding with Ocasio-Cortez were far from a homogeneous group politically. In response to Hayes' tweet invoking "Godwin's law"—the axiom, coined by lawyer Mike Godwin, that "as an online discussion grows longer, the probability of a comparison involving Nazis or Hitler approaches 1"—Godwin himself responded that, no, this wasn't what he was talking about. 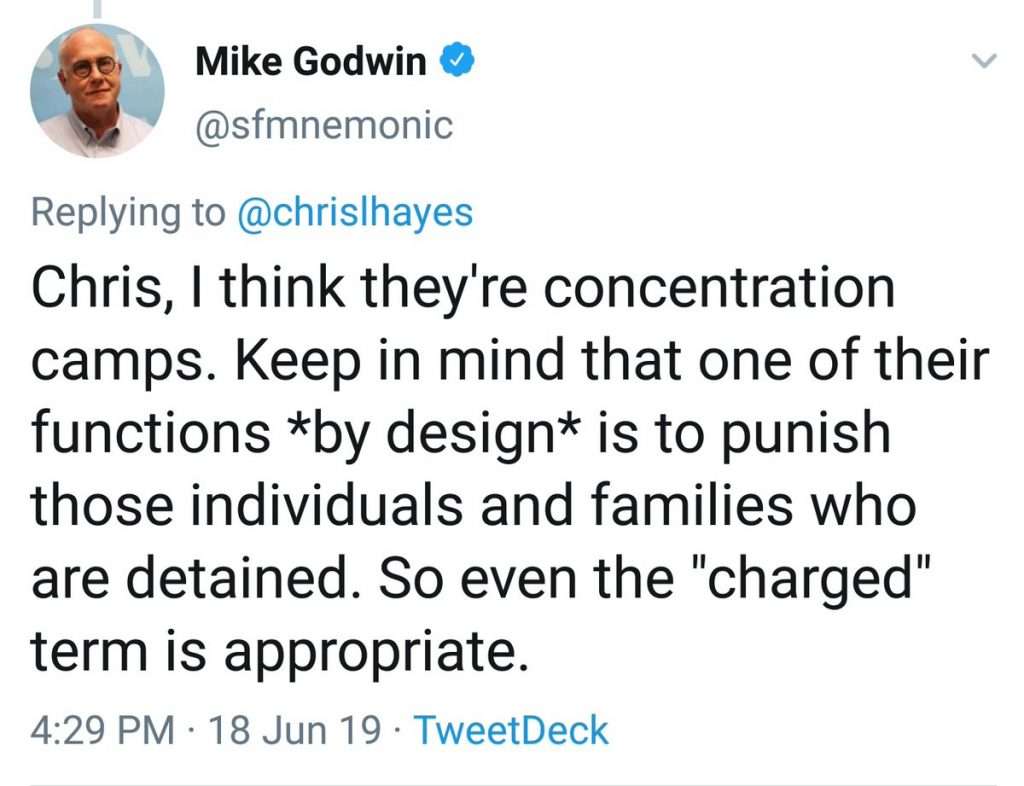 In a follow-up tweet, Godwin added: "Stop thinking that if you didn't do all the same things the Nazis did, you didn't really run a concentration camp."

Andrea Pitzer, author of One Long Night: A Global History of Concentration Camps, told Esquire: "We have what I would call a concentration camp system, and the definition of that in my book is, mass detention of civilians without trial."

Actor George Takei tweeted: "I know what concentration camps are. I was inside two of them, in America. And yes, we are operating such camps again."

Today The New York Times talks about one of the youngest victims of this system, whatever you call it. At four months old, "Constantin was ultimately the youngest of thousands of children taken from their parents under a policy that was meant to deter families hoping to immigrate to the United States," the Times reports.

The boy's family had come from Romania, seeking asylum from ethnic persecution of Roma there. The dad and boy went first, presenting themselves to border agents who locked the father up and took the boy. More:

In Constantin's case, it would be months before his parents saw him again. Before then, his father would be sent for psychiatric evaluation in a Texas immigration detention center because he couldn't stop crying; his mother would be hospitalized with hypertension from stress. Constantin would become attached to a middle-class American family, having spent the majority of his life in their tri-level house on a tree-lined street in rural Michigan, and then be sent home.

Now more than a year and a half old, the baby still can't walk on his own, and has not spoken.

A crackdown on emotional support animals is underway, following a sudden rash of complaints to the U.S. Department of Housing and Urban Development over alleged housing discrimination by landlords who wouldn't allow pets that owners claimed were medically necessary. HUD has received "more than a thousand similar complaints" so far in 2019, reports The New York Times. More:

The number of people claiming they have a right to live with animals for their mental health — as well as to take them onto planes and into restaurants and stores — has been growing rapidly.

In 2011, the National Service Animal Registry, a for-profit company that sells official-looking vests and certificates for owners, had 2,400 service and emotional support animals in its registry. Now the number is nearly 200,000.

But the spread of such animals — the vast majority of them dogs — has also been met by concerns from landlords, airlines and other businesses that many Americans may be abusing the system. Critics say that pet owners are obtaining phony certifications or letters from online therapists to avoid paying fees or to get permission to bring creatures where they wouldn't normally be allowed.

Now, "more than two dozen state legislatures have enacted new laws to crack down on fraud."

A reminder on the legal distinction between online "platforms" and online "publishers": there is none. At techdirt, Mike Masnick responds to ongoing claims from politicians and press that there is:

So, let's be clear, once again and state that there is no special legal distinction for "platforms," and it makes no difference in the world if an internet company refers to itself as a platform, or a publisher (or, for that matter, an instigator, an enabler, a middleman, a gatekeeper, a forum, or anything). All that matters is do they meet the legal definition of an interactive computer service (which, if they're online, the answer is generally "yes"), and (to be protected under [Section 230 of the Communications Decency Act]) whether there's a legal question about whether or not they're to be held liable for third party content.

Some people may want the law changed. And they may think that "internet platforms" should require some specific rules and regulations — including silly, unenforceable ideas like "being neutral," — but that's got nothing to do with the law today, and any suggestion that it does is simply incorrect.

And while we're on the subject: Jeff Kosseff, author of The Twenty-Six Words That Created the Internet, and Eric Goldman, a law professor, have curated an awesome archive of case documents related to Section 230 of the Communications Decency Act.

Also, check out James Pethokoukis' post at AEIdeas, the American Enterprise Institute's blog, which implores folks not to "ruin the internet over flukey 'bias' incidents like the recent one on Pinterest." Sound advice!

The Satanic Panic Is Back, and It's Bipartisan

The Failed Campaign To Kill To Kill a Mockingbird

Jason Russell | From the August/September 2022 issue