Earlier this month, a Florida teenager tried to burn down her family's home while her mother and brother were inside it. Here's how ABC News opened its story on the crime:

A 14-year-old girl was arrested after allegedly setting her family's house on fire in what authorities suspect is the latest case of Slender Man-inspired violence. 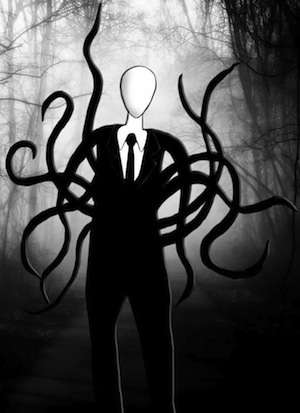 Slender Man is a character in a variety of online stories, films, and games. This past spring, two girls stabbed a classmate as part of a bizarre plan to prove the fictional creature was real. It was the sort of crime that gets a lot of press attention because of how singularly strange it is. But many reporters seemed to think it was not a weird one-off but a harbinger of a new trend, and a short burst of Slender Man media hysteria followed, with journalists attempting to link the mythical monster to a variety of crimes. Even Jerad and Amanda Miller's shooting spree in Las Vegas got roped in, on the grounds that Jerad, who made money by dressing up as various characters and posing for photos, had been known to wear a Slender Man costume.

So what's the supposed Slender Man connection in the new story? Here's how one local outlet, WFLA-TV, covered the arson:

Detectives say the girl told them that she decided to set the home on fire while reading the online book "Soul Eater," which made her upset about past bullying and her mother disciplining her. The teen sprayed a rum and bleach mixture onto a towel and bed sheet that she put on the floor of the family's garage. She then set them on fire and walked out of the garage, according to an arrest affidavit….

The teen had also visited sites related to The Slender Man, according to investigators. She admitted to using the websites Creepypasta.com and SoulEater.com, which are associated with The Slender Man.

From this, it sounds like she decided to kill her family because she felt mistreated—not an unusual motive for this sort of crime. Apparently Soul Eater (described here as an "online book," though she was probably actually referring to this anime and manga series) played a role in her thought process. And…

And that's it. She also "admitted" to "using" (which I assume means "reading") Creepypasta.com, a vast depository of online horror stories that is "associated with The [sic] Slender Man" in the sense that he is one of the many characters one might encounter there. But I'm not sure why that's relevant. ("SoulEater.com" does not appear to exist.)

So how did we get the idea that Slender Man might have inspired the fire? Is this leap something the press did on its own, or was it following someone else's lead?

"She had visited the website that contains a lot of the Slender Man information and stories," Eddie Daniels of the Pasco Sheriff's Office told ABC News. "It would be safe to say there is a connection to that."

A few more piece of press coverage before we go. While WFLA mentions Slender Man without offering a reason to think he's connected to the crime, and while ABC News puts Slender Man in its lede but at least uses conditional language, The New York Post's headline claims forthrightly that the arsonist was "obsessed" with Slender Man. (The text of the Post piece offers nothing to support this.) Gawker, BuzzFeed, the New York Daily News, and The Daily Mail use the word "obsessed" as well; the only evidence of obsession that any of them offer is that she wrote about the character and posted about him on Facebook. And this outlet lays blame squarely on the fictional monster's shoulders:

The first 10 words of the article are "Slender Man has inspired another act of teenage violence." Well, he's certainly inspiring something.

Government, Not Big Tech, Is the Biggest Threat to Free Speech

In the Name of Pandemic Relief, Biden Would Expand Obamacare Subsidies to Households Making $350,000 a Year

After the Cops Seized Her Car, the Government Waited Five Years Before Giving Her a Chance To Get It Back

The cultural views of elite white liberals are not popular with many minorities.

Plus: The era of sovereign influencers, a new experiment in universal basic income, and more...