In our last four posts, we have described how our Federal Criminal Justice Clinic's Freedom Denied report reveals a culture of detention, with federal judges routinely violating the Bail Reform Act that they are tasked with upholding.

This post addresses the last of our four findings and recommendations: "Judges must stop unlawfully jailing people for poverty through excessive financial conditions."

The Bail Reform Act unequivocally prohibits judges from jailing people who are too poor to pay for their release: "The judicial officer may not impose a financial condition that results in the pretrial detention of the person." 18 U.S.C. § 3142(c)(2).

Despite the Act's prohibition,

[o]ur courtwatching study shows that federal judges consistently impose financial conditions of release that result in pretrial detention. This practice violates the explicit statutory language of the Bail Reform Act, perpetuates a system where wealth buys release and people are jailed for poverty, and has a disproportionate racial impact. These detentions, which violate the law, contribute to rising detention rates as well as racial and socioeconomic disparities in the federal system. 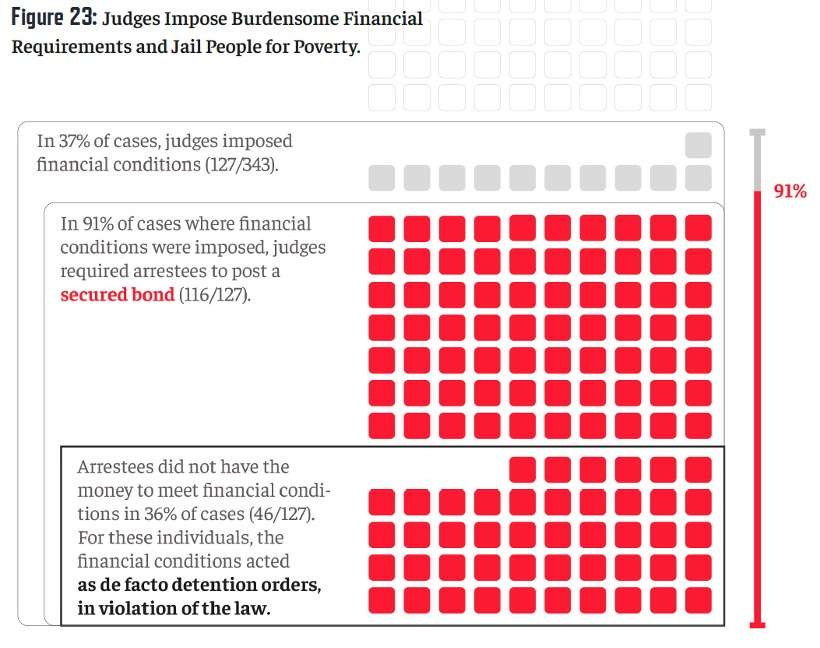 Given the Act's clarity on this issue, we were shocked to see judges imposing unmeetable financial conditions, ultimately resulting in pretrial jailing:

In one district where we courtwatched, arrestees were detained in 40% of cases involving financial conditions solely because they did not have the money to pay for their release…. Judges in that district regularly imposed federal bail bonds known as corporate surety bonds (CSBs). In 92% of cases where a CSB was imposed, the accused was locked in jail because they were unable to obtain a bail bond. Every single individual subjected to a CSB was a person of color…. 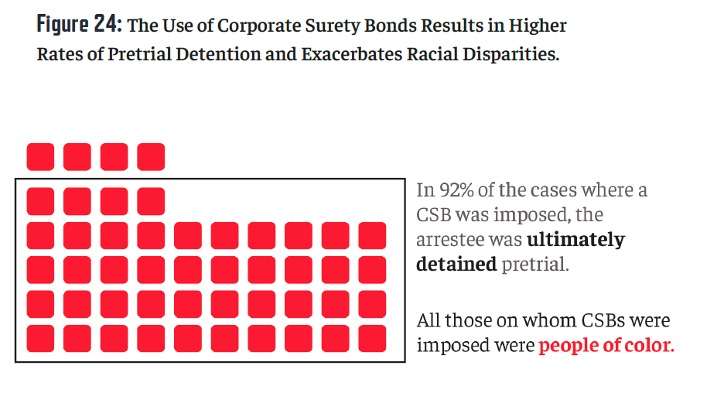 The use of CSBs results in higher rates of pretrial detention because indigent people are unable to obtain such bonds. In our study, CSBs were used in 14% of all cases (and only in one district, the Southern District of Florida (Miami)). In 92% of the cases where a CSB was imposed, the arrestee was ultimately detained pretrial (after both the Initial Appearance and the Detention Hearing). See Figure 24. At the Initial Appearance, 100% of cases involving a CSB ultimately resulted in pretrial detention; at the Detention Hearing, 70% of cases involving a CSB resulted in the detention of the arrestee. In contrast, when an unsecured bond was imposed, only 10% of people were detained at the Initial Appearance, and no one was detained at the Detention Hearing.

We were also surprised to find judges requiring people to post secured bonds in one-third of cases:

In 34% of all cases and 91% of cases where financial conditions were imposed, judges required arrestees to post a secured bond, reintroducing the evils of cash bail systems that the BRA sought to avoid.

The excessive use of financial conditions of release fell hardest upon people of color:

People of color are less likely to meet financial requirements, as institutionalized racism in the form of housing, tax, financial, and education policies has resulted in highly uneven distributions of wealth and property ownership. Black Americans own just one-tenth of the wealth of white Americans, and this wealth gap "persists regardless of households' education, marital status, age, or income." Although the average Black American household owes one-third of the debt owed by the average white American household, the interest rates for Black borrowers are noticeably higher. Research conducted in the Second Circuit, for example, found that 33% of white arrestees in that federal court were homeowners, compared to just 7% of Black arrestees and 9% of Latino arrestees. 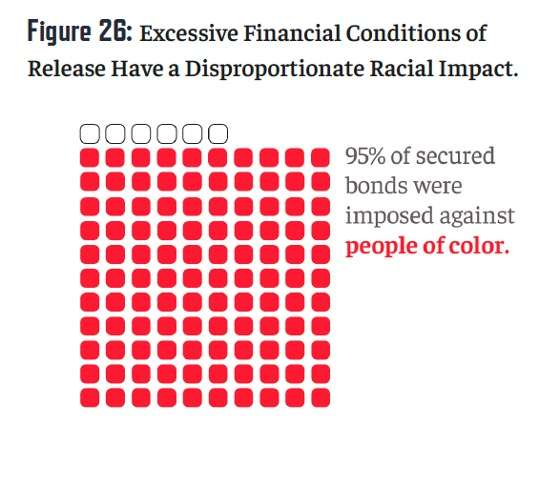 "The Solution: At Both Pretrial Hearings, Judges Must Stop Imposing Financial Conditions that Result in Detention and Tailor Release Conditions to Each Arrestee's Individual Economic Circumstances."

As the Bail Reform Act makes clear, there are many alternatives to imposing financial conditions of release, and those alternatives are often more effective at ensuring the individual's appearance in court and disincentivizing reoffending while on release.