In Part II of our series describing the culture of detention that pervades the federal pretrial system, we explained how our Federal Criminal Justice Clinic's new report, Freedom Denied, found that judges and lawyers frequently misapply the Bail Reform Act's standard for detention at the Initial Appearance—often resulting in illegal jailing.

This post addresses the second of our four findings and recommendations: "Judges must stop unlawfully jailing poor people without lawyers at the Initial Appearance hearing."

We were the first to uncover a serious and previously unexplored "access-to-counsel crisis" in the federal system. In more than a quarter of federal district courts across the country, an indigent individual can be jailed without a lawyer by their side:

In many federal courts, judges lock poor people in jail without a lawyer during their Initial Appearance, in violation of federal law. Our study uncovered a national access-to-counsel crisis: judges in more than one-quarter of the 94 federal district courts do not provide every arrestee with a lawyer to represent them during the Initial Appearance. See Figure 6. In fact, 72% of the districts where we interviewed or surveyed stakeholders deprive at least some individuals of counsel at this first bail hearing. While the scope of the problem varies across districts and divisions, in every court that exemplifies this particular crisis, arrestees are jailed without counsel. These widespread deprivations of counsel contribute to the culture of detention and drive high jailing rates at Initial Appearances nationwide…. 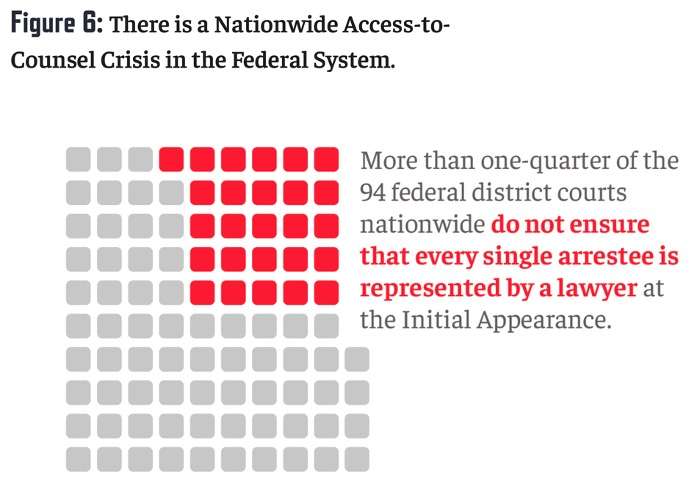 Additionally, in interviews with and surveys of stakeholders, we learned that in at least 26 federal districts, judges fail to ensure that arrestees are represented by counsel at the Initial Appearance in some—and often many—cases. In certain courts, 100% of arrestees are deprived of counsel during their Initial Appearance. Our findings surely understate the scope of this particular crisis, as we were unable to interview stakeholders in 58 federal districts (62% of the total districts).

Indigent people who went unrepresented were locked in jail 100% of the time in our study; 92% were people of color:

Our data show that these legal failures come with serious consequences. Every uncounseled Initial Appearance we observed ended in pretrial detention—a far higher detention rate than at the Initial Appearances where arrestees were represented by counsel. See Figure 17. And nearly every single arrestee we observed who faced an Initial Appearance without a lawyer was either Black or Latino, exacerbating the already pronounced racial disparities in the criminal system. See id. These findings are particularly troubling given that most people charged with a federal crime do not have the money to hire their own lawyer and therefore rely wholly upon judges to appoint counsel at their Initial Appearances.

A judge who does not ensure that every single individual who appears before them is represented by counsel at the Initial Appearance violates a number of federal laws.

Section 3006A states in mandatory terms that every indigent arrestee "shall be represented … from initial appearance." The plain text of this law requires several things. First, it mandates "represent[ation]"—meaning a lawyer must actively appear on behalf of every arrestee and represent them as counsel, not just passively standby in an advisory capacity. Second, the plain language of the statute requires that each person be represented during their Initial Appearance. Dictionary definitions and case law define the word "from" inclusively, as a "starting-point" for a series. It follows that requiring representation "from initial appearance" does not mean a judge can provide counsel toward the end of that hearing, let alone after that hearing concludes. Rather, the law requires judges to provide each arrestee with a lawyer to stand up on their behalf and represent them for the entire duration of the Initial Appearance hearing.

The Federal Rules of Criminal Procedure likewise require judges to provide counsel to represent every arrestee during the Initial Appearance. The text of Rule 44, which governs appointment of counsel, states that any arrestee unable to retain counsel shall have an attorney appointed to "represent the defendant at every stage of the proceeding from initial appearance through appeal." In its notes on the 1966 amendment to Rule 44, the Advisory Committee explained, "The phrase 'from his initial appearance before the commissioner or court' is intended to require the assignment of counsel as promptly as possible after it appears that the defendant is unable to obtain counsel." Rule 5, which discusses Initial Appearances specifically, also states that "[t]he judge must allow the defendant reasonable opportunity to consult with counsel" during the Initial Appearance hearing itself. Much like the CJA, these rules establish that every arrestee has the right to be actively represented by a lawyer for the entire duration of the Initial Appearance.

Third, the only way someone can meaningfully navigate the complexities of the BRA's legal standards is through counsel:

Beyond the laws requiring representation by counsel, every arrestee needs a lawyer to enforce the complex legal standard that applies at the Initial Appearance, ensure that the judge does not hold an unwarranted Detention Hearing, and prevent the person from being locked in jail in violation of the BRA. Every federal Initial Appearance involves a determination of detention or release governed by the BRA. When the prosecution moves for detention at the Initial Appearance, § 3142(f) sets forth the only lawful bases for detention and the holding of a Detention Hearing; courts are required to release the arrestee when no § 3142(f) factor is present. Unrepresented arrestees cannot effectively enforce their own rights under that statute, make their own bond arguments, or hold prosecutors and judges to the law's strictures.

Fourth, there is also a serious question as to whether the absence of counsel at the Initial Appearance violates the Constitution:

The federal Initial Appearance is a critical stage[, thus requiring appointment of counsel]. All available evidence illustrates that the outcome of the Initial Appearance may adversely affect an arrestee's rights, and that counsel is necessary to protect those rights under the BRA and navigate the pretrial labyrinth. The attachment rule is supposed to ensure that a person has a right to counsel at the point when "the accused 'finds himself faced with the prosecutorial forces of organized society, and immersed in the intricacies of substantive and procedural criminal law'"—such as the intricacies of the legal standard that applies during the federal Initial Appearance.

"The Solution: At the Initial Appearance, Judges Must Follow the Law and Appoint Lawyers to Actively Represent Every Indigent Arrestee."

The responsibility for this access-to-counsel crisis falls squarely on the judges' shoulders…. Every time a federal judge fails to provide a lawyer for an arrestee during the Initial Appearance and forces that person to appear pro se across from a prosecutor, they violate the law. Locking people in jail without lawyers is a perversion of the adversarial system.

Courts must ensure that every person accused of a federal crime is actively represented by a lawyer from the start of their Initial Appearance, and at least before any detention or release determination is made….

The best practice is to have a duty federal defender or CJA lawyer actively represent arrestees at every Initial Appearance, and for judges to secure additional CJA lawyers whenever the federal defender's office is conflicted out.

Prosecutors, too, have the responsibility and the power to address this access-to-counsel crisis:

Federal prosecutors should never participate in any hearing in a criminal case when there is no advocate on the other side. Instead, there should be a blanket DOJ policy requiring prosecutors to insist on the appointment of counsel at the Initial Appearance before any hearing is held—especially any hearing where they seek to jail the accused. If DOJ adopts such a policy, it is imperative that judges and other stakeholders hammer out the logistics so that counsel is provided promptly and the Initial Appearance is not delayed to procure counsel.

In fact, the Department of Justice recently issued internal guidance to Assistant United States Attorneys aimed at rectifying this access-to-counsel problem: "[P]art of the deputy attorney general's guidance on best practices for prosecutors [regarding pretrial detention] included an explicit reminder that federal law states that 'a defendant who is unable to obtain counsel is entitled to have counsel appointed to represent the defendant at every stage of the proceeding [including] initial appearance,' except where 'the defendant waives this right.'"

Anything short of complete representation falls short of what the law requires and tramples on the liberty interests of people who have yet to be tried or convicted.