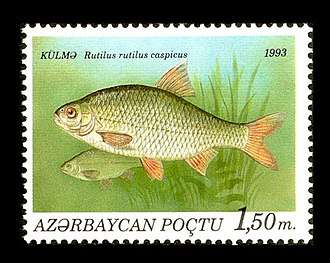 OK, I took some liberties with the translation—but not a lot. She wrote, "НЕТ В***Е," which most Russians today would interpret as "НЕТ ВОЙНЕ," which means "No to War." But she testified she meant, "НЕТ ВОБЛЕ," which means "No to Vobla"—a fish that is apparently called a Caspian roach in English (see the Azerbaijan stamp above)—because "she feels a dislike of this kind of fish."

This assertion, the court said, was "in no way contradicted," and the defendant was therefore acquitted. The court also ordered that her yellow box of blue chalk, which she apparently used to write this in a city square (the Square of Unity and Concord, in the city of Tumen' in Siberia), be returned to her. My hat is off to you, Alisa Alekse'evna Klimentova, and to you, Judge Sergey Vladimirovich Romanov (no relation to the other Romanovs, I presume).

My conjecture, by the way, is that this reflects not the Russian legal system's respect for the presumption of innocence (or whatever formal analog it might have in Russian law), but rather opposition by the judge or the local hierarchy (or both) to either the conduct of the war or at least to the prosecution of this dissenter. Query also where the court really had to note the color of the box and the chalk, or whether it was the judge's way of further accentuating that he knows perfectly well what Klimentova was doing, but doesn't mind. (Note that my Russian namesake Maria Volokh, who was convicted for displaying a sign that simply said "*** *****," was not so fortunate.)

The incident has apparently been promptly and massively memed. People who can read simple Russian words and phrases may enjoy the items on this page, including, for instance, Tolstoy's Gar and Peace, Brad Pitt in World Gar Z, and Darth Vader in Star Gars. And if you know Russian even better, check out this song by Semyon Slepakov, which has gotten more than 1M views in the last three days: