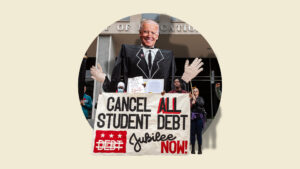 Earlier today, six GOP-controlled state governments filed a lawsuit challenging the legality of President Biden's massive student loan forgiveness program. This development is notable because at least some of the states have a very strong argument for "standing," the biggest procedural obstacle to getting legality of the program considered in court.

The Congressional Budget Office estimates that the administration's plan will cost some $400 billion. Other estimates differ. But it's clearly a massive expenditure of federal funds regardless. The Justice Department claims that the loan forgiveness plan is authorized by a provision of the 2003 HEROES Act. For reasons discussed in a previous post, the Biden plan goes far beyond what the statute authorizes, and is also at odds with the "major questions" doctrine and nondelegation constraints on executive power. The loan forgiveness plan is a major executive usurpation of Congress' spending power, similar to Donald Trump's attempt to divert military funds to build his border wall.

The substantive legal arguments made in the states' lawsuit are similar to those I and other critics of the program have been making since it was announced, and also to those put forward in the Pacific Legal Foundation (PLF) lawsuit filed yesterday. But the biggest significance of the state case is that the plaintiffs have a particularly strong case for standing, one that is harder to counter than that advanced in the PLF case (filed on behalf of Frank Garrison, an attorney who would end up with a higher state tax liability as a result of the loan forgiveness policy).

As I explained in an earlier post, Supreme Court precedent requires plaintiffs in federal cases to prove "standing," which includes demonstrating that they have suffered or are likely to suffer an "injury" because of the law or policy they are challenging. That injury cannot be based merely on the plaintiff's status as a taxpayer who might have to bear a higher fiscal burden as a result of the challenged program's expenditure of government funds.

At least two of the state plaintiffs (Missouri and Arkansas) meet this burden because they have state government agencies that act as servicers for federally funded student loans of the type that would be forgiven under the administration plan. In my previous post on standing and student loans, I explained how such organizations qualify for standing to challenge the Biden plan:

[Loan servicers] collect student loan payments on behalf of the government, and the size of the fees they get depends in part on how much money is owed, whether the loan is delinquent, and how long the borrower takes to repay it. If loan forgiveness reduces delinquency rates, enables some borrowers to repay faster, or otherwise affects the amount servicing firms get paid, they pretty obviously suffer an injury in fact, and would have standing to sue.

The idea that loan servicers have standing to challenge the Biden plan is widely accepted by lawyers and legal scholars. Indeed, I have yet to see any serious argument to the contrary. It is obvious that the administration's plan to cancel loan debt owed by many millions of people will cost the Nebraska and Arkansas state student loan servicing agencies at least some money. And, under Supreme Court precedent, even a very small loss ($1 is enough!) qualifies as an injury sufficient for standing.

In a move likely intended to make it more difficult for opponents of the plan to find potential plaintiffs who can get standing, the Biden Administration has exempted loans held by private lenders—many of them contracted under the Federal Family Education Loan Program (FFELP)—from its debt cancellation policy. Administration officials may have thought that private lenders are more likely to sue than loan servicers who have ongoing relationships with the Department of Education, and therefore may be reluctant to bite the hand that feeds them.

The administration's decision to exempt the FFELP loans (thereby excluding some 770,000 potential beneficiaries of the loan forgiveness program) strikes me as a sign of weakness. If they were confident of prevailing on the merits, they would not be so eager to sacrifice hundreds of thousands of program beneficiaries merely to reduce the odds of facing a lawsuit by a plaintiff with standing.

Regardless, this move is unlikely to stop the state lawsuit. In addition to servicing FFELP loans,  the Higher Education Loan Authority of the State of Missouri (MOHELA) also (according to the states' complaint) services conventional Direct Loan Program (DLP) student debt. These DLP loans are enough to give Missouri standing, even if the FFELP loans it services are exempt.

As I noted in an update to my post about the PLF lawsuit, the administration plans to block standing in that case by allowing Garrison and others like him to opt out of the loan forgiveness plan. Whether this strategy succeeds may depend on how the opt-out is structured, and how difficult it is to get one.

But even if the opt-out defeats standing in the PLF case, the administration doesn't have a similar way to get around it in the state case. Exempting DLP loans from the the debt cancellation program would essentially gut the entire plan, as these are the vast majority of the loans potentially covered by it.

The Administration could potentially exempt only those DLP loans serviced by MOHELA or those held by state-controlled loan servicers generally. But such a move would only invite additional lawsuits by other loan servicers. If the latter see that filing a lawsuit is an easy path to getting exempted from the plan, that increases the potential benefit of suing, and reduces the risk. Loan servicers could even band together to file a class action lawsuit, thereby reducing the risk that the Department of Education will retaliate against them (it cannot easily refuse to deal with the entire industry).

The PLF lawsuit can also be attacked on standing grounds because the injury in that case is partly caused by the structure of state tax law (an issue on which the judge in that case has asked for additional briefing). That question does not arise in the case filed by the six states.

For these reasons, the filing of the state lawsuit significantly increases the likelihood that standing issues will not prevent courts from addressing the underlying legality of the Biden loan forgiveness plan. Standing problems may stymie some potential plaintiffs. But they probably won't block all of them.

Critics may justifiably attack the GOP politicians behind the state lawsuit as hypocrites. Where were these people when Trump similarly tried to use emergency powers to raid the treasury for his border wall? The same charge also applies to the many Democratic politicians who condemned Trump's border wall diversion, but cheer on Biden's loan forgiveness plan. Just as there are "fair weather federalists," there are also fair weather champions of separation of powers.

But the hypocrisy of many of the politicians involved doesn't undermine the legal validity of their case. Many important cases have been won by litigants with highly impure motives. So it may prove here.

But, for those who care, I take this opportunity to reiterate that I forcefully opposed Trump's border wall diversion, too (see, e.g., here, here, and here). Of course, consistency on such matters is easier to achieve if you're not a politician and have no desire to become one!

As with the PLF lawsuit, a victory for the plaintiffs may not automatically result in an injunction barring the program as a whole. How broad the resulting injunction would be is an issue that is itself likely to be fought in court, should the states prevail on the merits. Potential options include a nationwide injunction stopping the entire plan, an injunction limited to borrowers residing in the plaintiff states, and perhaps other possibilities, as well.

NOTE: The Pacific Legal Foundation—the public interest firm litigating the Garrison case—is also my wife's employer (though she herself is not working on the case). My interest in this issue—and other similar separation of powers matters—long predates PLF's involvement. I do not have any connection to the lawsuit filed by the six states.

As a university professor, I actually stand to benefit from Biden's plan, if courts uphold it, because loan forgiveness essentially subsidizes the consumption of the services universities and their faculty provide.

UPDATE: Oliver Dunford of the Pacific Legal Foundation has pointed out to me that PLF filed an amicus brief supporting one of the lawsuits challenging Trump's border wall diversion, and thus—to their credit—has taken a consistent position on these sorts of issues, regardless of the partisan valence of the particular program in question.