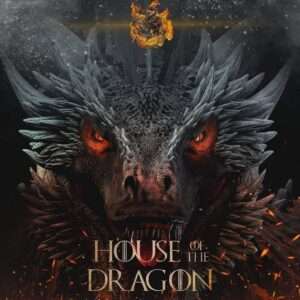 NOTE: This post contains some minor spoilers for Fire and Blood, the George R.R. Martin book on which the TV series is based.

On Sunday night, HBO aired the first episode of House of the Dragon, the prequel series to the hugely successful—but also highly controversial—Game of Thrones. The new series is based on part of George R.R. Martin's book Fire and Blood, the history of House Targaryen's rule over the Seven Kingdoms of Westeros. It is set some 200 years before the events of GOT, and focuses on civil conflict known as the "Dance of the Dragons" and the events leading up to it.

At the time House of the Dragon,  the Targaryen dynasty is firmly in control of the Iron Throne of the Seven Kingdoms. And there are plenty of dragons! The Targaryens' control over them is one of the foundations of their power. But a potential succession crisis is brewing over King Viserys' lack of a direct male heir. While the King has a daughter, Princess Rhaenyra, many Westerosi are unwilling to accept a female ruler. Viserys is reluctant to name his brother, Prince Daemon as his successor, because—among other things—Daemon seems violent and unstable.

It's too early to say how good the new series will be overall. But the first episode was a strong start. The acting, visuals, plot, and pace, were all excellent. Perhaps the most compelling element of the pilot is the way it was able to generate sympathy for the main characters, even though almost all of them are actually awful people. This is possible, in part, because many of their worst deeds lie in the future. But it's an achievement nonetheless.

If you have read the book on which the series is based, you know that there are few, if any admirable people among the key figures in the story. This is not the tale of a conflict between good and evil, or even between a greater evil and a much lesser one. Both sides are awful, arguably to roughly the same degree.

The "Dance of the Dragons" largely lacks sympathetic protagonists, like Arya, Sansa, Tyrion, Jon Snow, and (until late in the series) Daenerys Targaryen, in Game of Thrones. Despite this obstacle, the pilot episode nonetheless generates considerable sympathy for the major characters. It does so by highlighting the understandable nature of their motivations, and the difficult situations they find themselves in.

The series also turns King Viserys I into a more substantial and compelling figure than he is in the book. This can be defended on the grounds that the book narrator (a fictional Westerosi historian) isn't unbiased. Rhaenyra is also a sympathetic figure here, as well. We see her trying to make the best of a tough situation, and she doesn't—yet—seem intent simply on pursuing power for its own sake.. While the show highlights Prince Daemon's ambition and penchant for violence, even he has some good moments, as he makes some telling points on occasion.

It will be interesting to see how the series handles these characters as the story moves on. I don't think it's too much of a spoiler to note that their actions get more and more reprehensible over time!

In  addition to the problem of dealing with unsympathetic characters, a major challenge of adapting story of the "Dance of the Dragons" is figuring out what the theme of the story is. As I have discussed in previous writings (e.g. here and here), the big overarching theme of Game of Thrones is that the dangers of political power require institutional solutions, not merely the replacement of evil or incompetent rulers with seemingly good ones. If we are going to "break the wheel" of oppression, as Daenerys famously puts it, we need institutional change. This is an important idea, at odds with the typical focus of many science fiction and fantasy stories on individual heroes.

It is hard to say whether the "Dance of the Dragons" has any comparably powerful main theme to it. The most obvious candidate is a feminist message about how it's wrong to reject the idea of female rulers. But, in 2022, this hardly comes off as a brilliant new insight. In addition, at least in the book, Princess Rhaenyra is hardly a poster girl for the virtues of female political leadership. In fairness, her mostly male adversaries are just as bad. But "women have the right to be evil rulers just like men" probably isn't the best possible feminist message.

Of course, the series could potentially push other ideas. Or it could find a way to promote feminist ideals in spite of Rhaenyra's shortcomings. The pilot nods to the latter possibility with its emphasis on the pain and danger women undergo in the process of giving birth (especially in a society without modern medicine), which is explicitly analogized to men's suffering in warfare; even today, society honors the latter far more than the former, and the show suggests that attitude is deeply wrong. They could also potentially depict Rhaenyra as a far more admirable person than she is in the book, though I don't see how that can be achieved without substantial plot changes.

I look forward to seeing how the show-runners handle these and other issues!