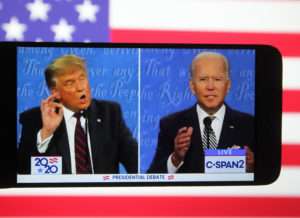 Here is an excerpt from the report's Introduction:

We are political conservatives who have spent most of our adult lives working to support the Constitution and the conservative principles upon which it is based: limited government, liberty, equality of opportunity, freedom of religion, a strong national defense, and the rule of law.

We have become deeply troubled by efforts to overturn or discredit the results of the 2020 Presidential Election. There is no principle of our Republic more fundamental than the right of the People to elect our leaders and for their votes to be counted accurately. Efforts to thwart the People's choice are deeply undemocratic and unpatriotic. Claims that an election was stolen, or that the outcome resulted from fraud, are deadly serious and should be made only on the basis of real and powerful evidence. If the American people lose trust that our elections are free and fair, we will lose our democracy….

We therefore have undertaken an examination of every claim of fraud and miscount put forward by former President Trump and his advocates, and now put the results of those investigations before the American people, and especially before fellow conservatives who may be uncertain about what and whom to believe. Our conclusion is unequivocal: Joe Biden was the choice of a majority of the Electors, who themselves were the choice of the majority of voters in their states. Biden's victory is easily explained by a political landscape that was much different in 2020 than it was when President Trump narrowly won the presidency in 2016. President Trump waged his campaign for re-election during a devastating worldwide pandemic that caused a severe downturn in the global economy. This, coupled with an electorate that included a small but statistically significant number willing to vote for other Republican candidates on the ballot but not for President Trump, are the reasons his campaign fell short, not a fraudulent election.

Donald Trump and his supporters have failed to present evidence of fraud or inaccurate results significant enough to invalidate the results of the 2020 Presidential Election. We do not claim that election administration is perfect. Election fraud is a real thing; there are prosecutions in almost every election year, and no doubt some election fraud goes undetected. Nor do we disparage attempts to reduce fraud. States should continue to do what they can do to eliminate opportunities for election fraud and to punish it when it occurs. But there is absolutely no evidence of fraud in the 2020 Presidential Election on the magnitude necessary to shift the result in any state, let alone the nation as a whole. In fact, there was no fraud that changed the outcome in even a single precinct. It is wrong, and bad for our country, for people to propagate baseless claims that President Biden's election was not legitimate.

Here is the authors' summary of the results of the extensive litigation challenging the election results in suits filed by Trump and his supporters, such as the "Kraken" lawyers:

As part of his post-election attempts to retain the presidency, Donald Trump and his supporters filed 64 cases containing 187 counts in the six key battleground states, in addition to utilizing some of the recount and contest procedures available to them under state law. The former president maintains to this day that the 2020 election was stolen and the results fraudulent….

As part of his post-election attempts to retain the presidency, Donald Trump and hissupporters filed 64 cases containing 187 counts in the six key battleground states, in addition to utilizing some of the recount and contest procedures available to them under state law. The former president maintains to this day that the 2020 election was stolen and the results fraudulent.

This Report takes a hard look at the very serious charges made by Trump and his supporters. The consequences of a president and a major party candidate making such charges are monumental. If true, our electoral system is in desperate need of repair. If not true, that must be said because such false charges corrode our democracy and leave a significant share of the population doubting the legitimacy of our system, seriously weakening the country.

Every member of this informal group has worked in Republican politics, been appointed to office by Republicans, or is otherwise associated with the Party. None have shifted loyalties to the Democratic Party, and none bear any ill will toward Trump and especially not toward his sincere supporters. Many of us have worked over the years in polling places as part of Republican Election Day Operations looking for the same sort of fraud and irregularities Donald Trump claimed in 2020….

For this Report, we examined every count of every case brought in these six battleground states….

We conclude that Donald Trump and his supporters had their day in court and failed to produce substantive evidence to make their case.

It's worth adding that many of these cases were heard by Republican-appointed judges, including some appointed by Trump himself. One of the most significant decisions rejecting Trump's claims was written Judge Stephanos Bibas of the Third Circuit, a well-known Trump appointee, and previously a prominent conservative legal scholar at the University of Pennsylvania. As he put it: "Free, fair elections are the lifeblood of our democracy. Charges of unfairness are serious. But calling an election unfair does not make it so. Charges require specific allegations and then proof. We have neither here."

The one case the pro-Trump side won (in Pennsylvania) not only involved far too few votes to change the outcome, but also didn't involve allegations of voter fraud.

"Lost, Not Stolen" provides an excellent overview of all the issues raised in the election litigation, how courts resolved them, and why nearly all of the allegations made by Trump and his supporters were false. It's great one-stop shopping for anyone interested in these issues.

Most of the information and arguments in the report are not new. As the authors point out, their conclusions are much the same as those reached in numerous court decisions, and multiple post-election audits of ballots in key "battleground" states, including several conducted by Republican state officials or groups aligned with the GOP. An Arizona audit conducted by the "Cyber Ninjas" - consultants hired by pro-Trump Republicans hoping to find evidence of fraud - even concluded that Biden won the state's biggest county by a slightly larger margin than the official vote tally indicates.

In addition to its thorough and user-friendly format, the report's significance lies in the fact that the authors are big-name members of the conservative legal community who cannot easily be dismissed as liberals, or even "Never-Trumpers." Indeed, the authors' sentiments towards Trump and other backers of the "Big Lie" are, to put it mildly, far more forgiving than my own.

Whether the report changes many minds remains to be seen. As I have previously pointed out, the evidence against Trump's Big Lie has long been so strong and so readily available for so long, that most remaining belief in the lie is likely to be the result of some combination of "rational ignorance" and strong partisan bias. Still, there may be some who remain on the fence because they just haven't gotten around to looking the evidence, or have not seen it presented all in one place in an easily accessible form, by people on "their" side of the political spectrum.

Other things equal, people are willing to believe uncongenial facts presented by partisan allies, than if put forward by adversaries. Perhaps that dynamic will enable "Lost, Not Stolen" to have a bigger impact than I expect.