Recently, the Jackson, Mississippi Federalist Society Chapter invited me to deliver an address on the state of the Fifth Circuit. That invitation was occasioned by several posts I've written about how the judges on the Fifth Circuit often divide in unexpected ways. To prepare this address, I focused on opinons from the the en banc court over the past four years. More precisely, I focused on how the Republican-appointed judges vote on the en banc court. At present, twelve of the seventeen active judges are Reagan, Bush 43, and Trump nominees. 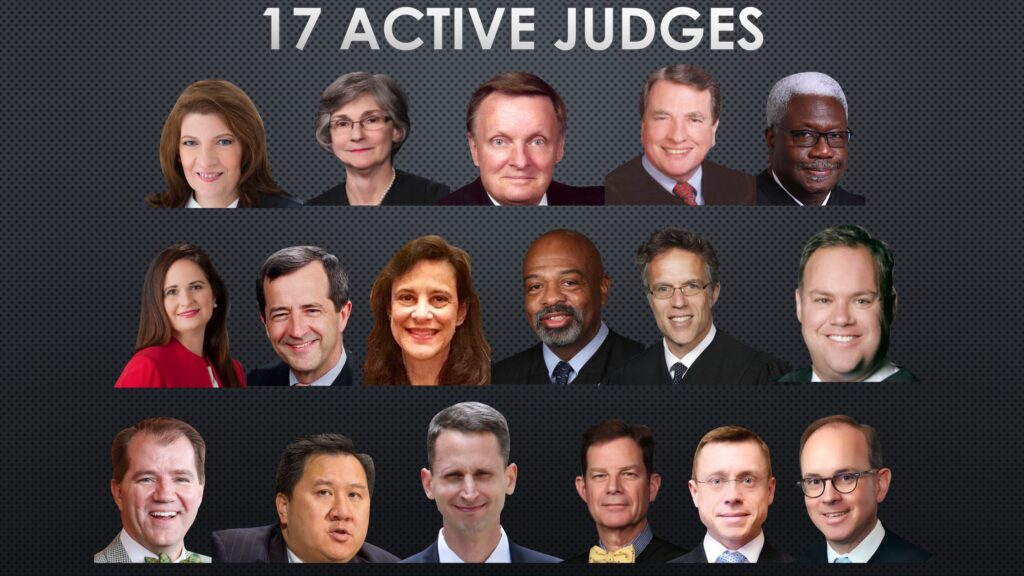 You can watch the lecture here. And I've uploaded the slides here. After the jump, I will highlight some of my findings.

First, I studied petitions for rehearing en banc that were denied with at least one dissent from denial. Between 2018 and 2022, I counted approximately 29 such cases. I say approximately, because it is difficult to get a precise count. The Fifth Circuit does not publish on its website all en banc polls with dissents. These orders are not always indexed on WestLaw or Lexis. The only way to find them is on PACER, which of course does not permit search. One such case is Louisiana v. Becerra, the vaccine mandate case that went to the Supreme Court. The Supreme Court is often criticized for having a "shadow docket." The term is misleading, because all of the Supreme Court's orders are readily available on its website. Nothing is in the shadows. By contrast, the Fifth Circuit actually has a shadow docket with opinions that are hidden. The Fifth Circuit, and all courts, should post all of its en banc polls--or at least those with at least one dissent.

This figure tracks how each of the Republican-appointed judges voted on the 29 en banc petition polls. 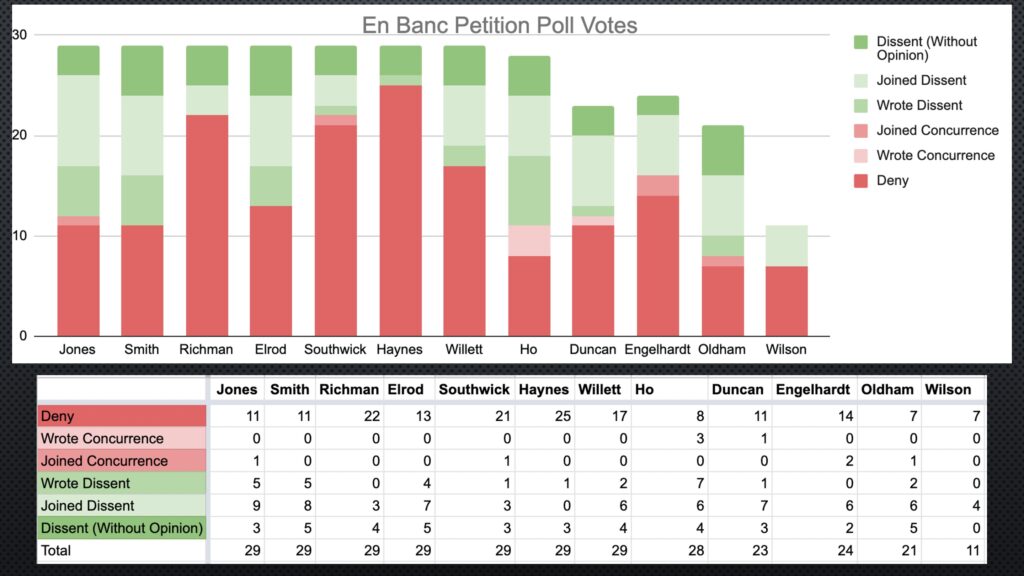 This figure simplifies the numbers, and shows how often each judge was willing to go en banc. On the current court, Judge Smith was the judge who most often voted for en banc review, followed by Judges Oldham, Ho, Jones, and Elrod. 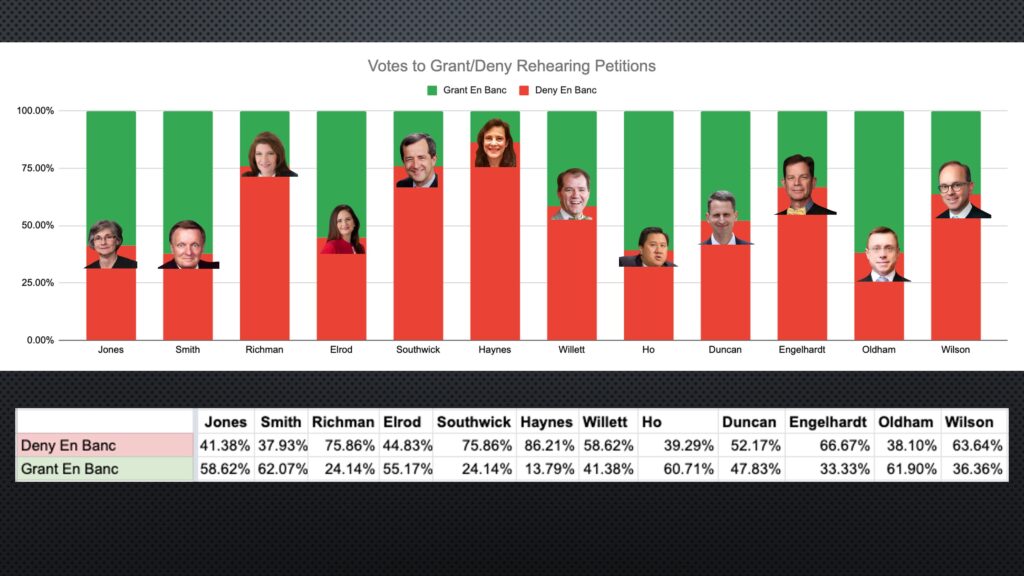 Next, I looked at how often judges wrote a separate writing at the petition phase. Judge Ho, far and away, has the most separate writings. Judges Jones, Smith, and Elrod round out the pack. 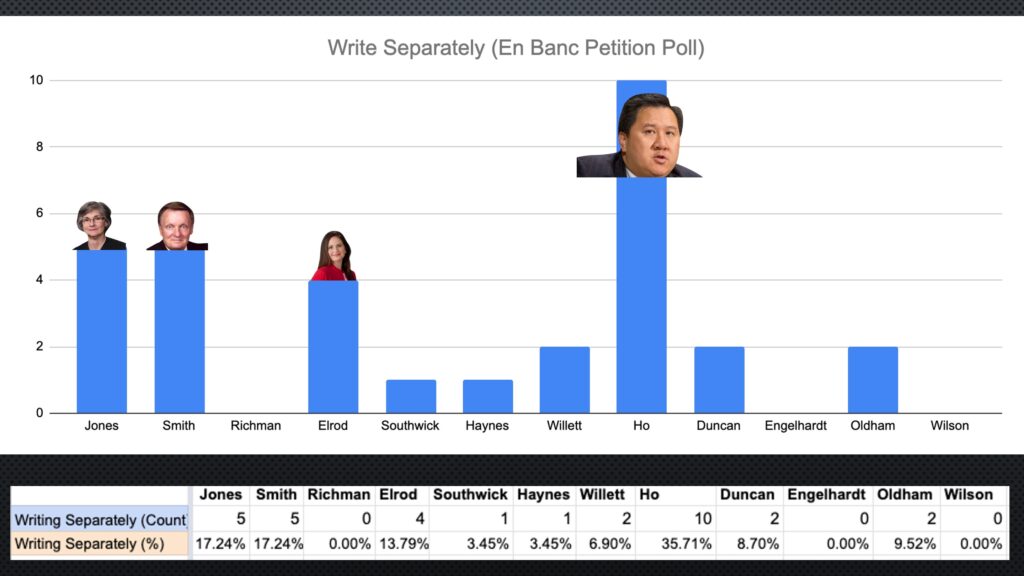 At the merits stage, Judge Oldham is the most prolific separate writer, followed by Judges Elrod and Ho. 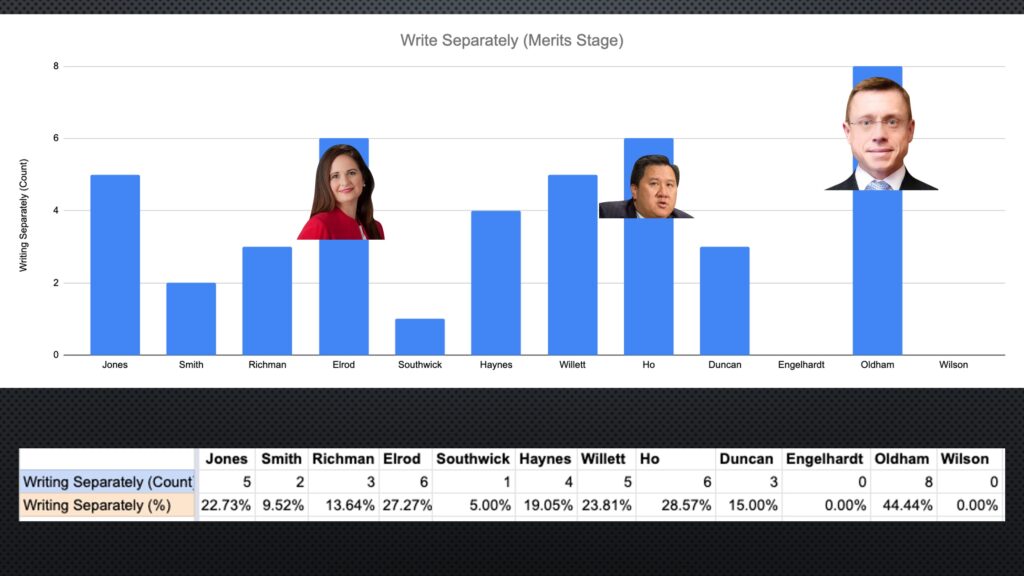 Next, I tried to assess the ideology of the Fifth Circuit judges. I was inspired by the Martin-Quinn scores. When a new member joins the Supreme Court, they are assigned a Martin-Quinn score based, in part, on the Justice they most closely resemble. For example, Justice (in waiting) Ketanji Brown Jackson would probably be most similar to Justice Sotomayor. I tried something similar, though far less scientific. I call it the EHJ score. I measured how close each Republican-appointed judge was to the most conservative member of the court--Judge Edith H. Jones. Every time a judge voted with Judge Jones on the en banc court, I added one point. Every time a judge voted against Judge Jones on the en banc court, I subtracted one point. These totaled points yield the EHJ scores. I don't pretend these numbers are indicative of much. But it does provide a baseline to assess how the conservative members of the Court line up.

Here are the EHJ scores at the petition and merit phases: 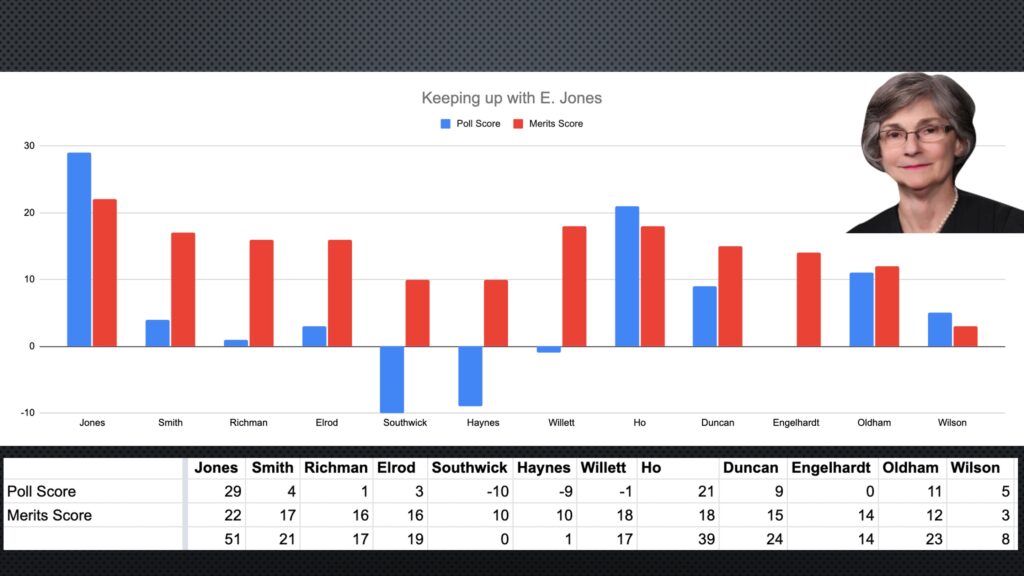 Finally, I plotted the judges based on their EHJ scores. The judges closest to Judge Jones are Judges Ho, Duncan, and Oldham. 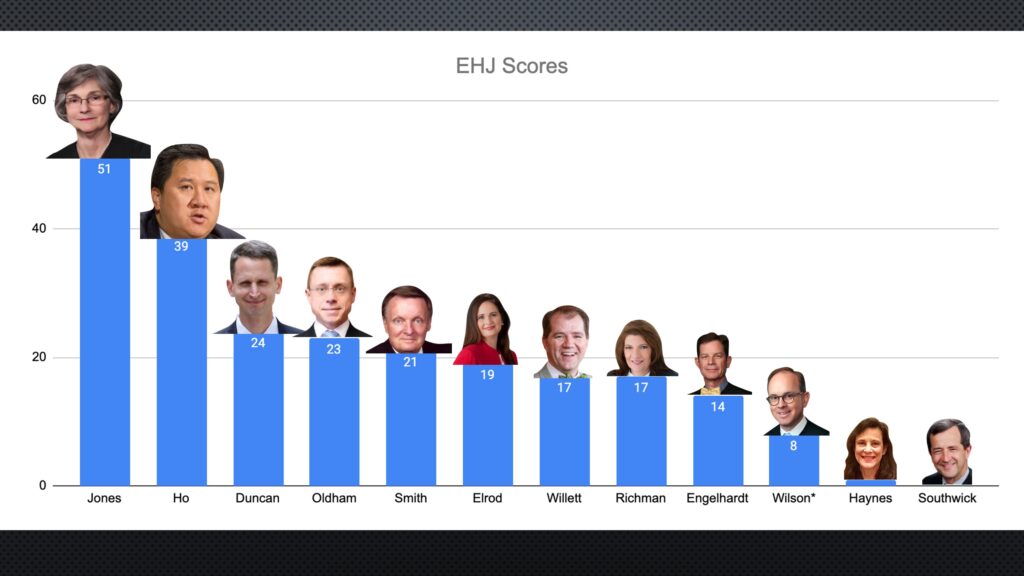 Still, I temper how useful these ratings are. My presentation demonstrates that conservative judges can, in good faith, disagree. I focus on a few such cases. Consider Hewitt v. Helix Energy Solutions. This dispute turned on the interpretation of the FLSA. Judge Ho wrote the majority opinion, which was joined by Judges Smith, Stewart, Haynes, Graves, Higginson, Costa, Willett, Duncan, Engelhardt, Oldham, and Wilson. Judge Jones wrote the dissent, which was joined by Chief Judge Owen (now Richman), and Judges Weiner, Elrod, and Southwick. Both opinions purport to be textualist. But only one can be right. The Supreme Court has granted cert in this case. 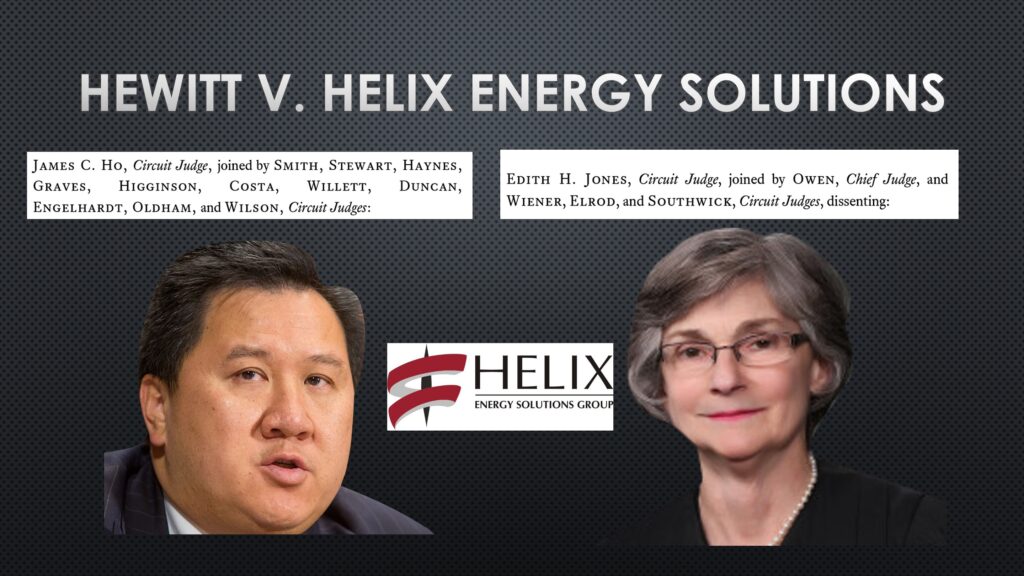 Another divided case was Oliver v. Arnold. Here, a teacher required his students to transcribe the pledge of allegiance and listen to "Born in the USA" by Bruce Springsteen. A student refused. The teacher then reprimanded the student, and gave her a zero on the assignment. The student sued the teacher for violating the First Amendment. The panel allowed a 1983 suit to proceed. The en banc court denied review by a vote of 10-7. Who voted to deny review? Judges Ho and Willett, among others. Who voted for review? Judges Jones, Smith, Elrod, Duncan, Engelhardt, Oldham, and Wilson. This case exposes fractures of how conservatives view free speech and educational policy. 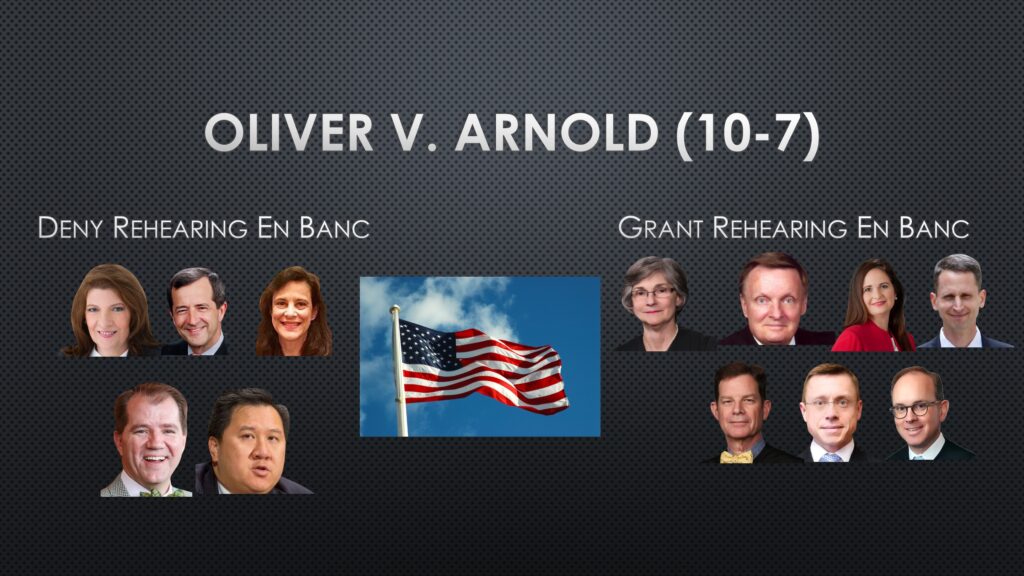 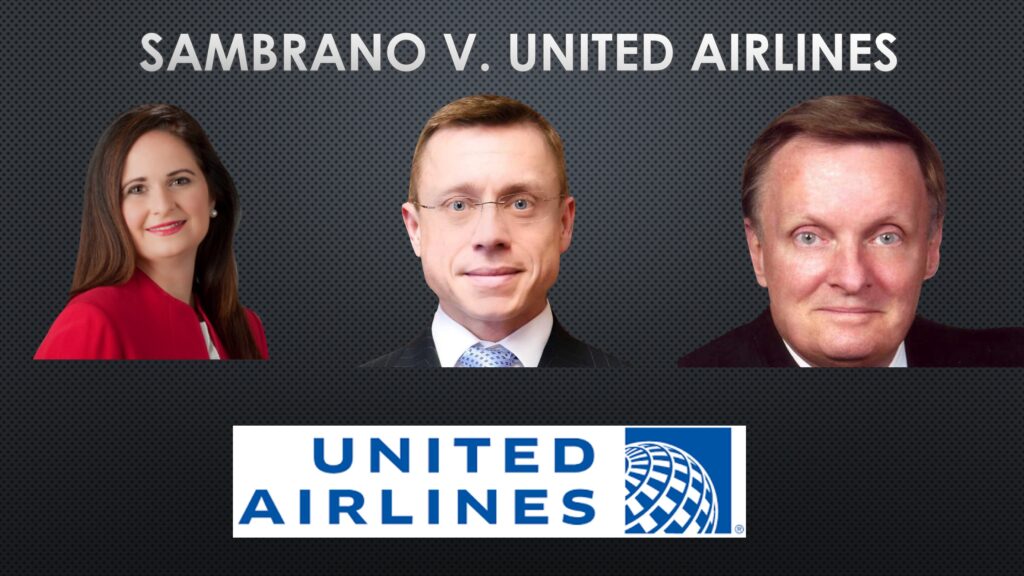 These cases demonstrate the the Fifth Circuit is not monolithically conservative. Like on the Supreme Court, even judges of similar stripes can draw very different lines.

I hope to deliver this address in other cities throughout the Fifth Circuit. And if things go to plan, I can update the presentation each year.

Andrea O'Sullivan | From the August/September 2022 issue

Brittney Griner's 9.5-Year Sentence Is Harsh Even By Russian Standards