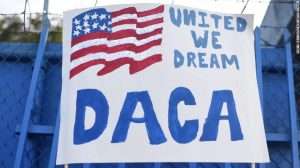 Today is the tenth anniversary of Deferred Action for Childhood Arrivals (DACA), a policy originally established by President Obama to protect children who were brought into the United States illegally.  DACA allows such migrants (often referred to as "dreamers," after the Dream Act, which has so far failed to pass Congress) to stay and work in the U.S. as long as they arrived in the  country when they were 15 years old or younger, were 30 or younger when the program began in 2012, have not been convicted of any crimes as of the time they apply for the program, and have either graduated from a U.S. high school, are currently enrolled in school, or have served in the armed forces. All told, the policy protects some 800,000 people from deportation.

I have been writing about this program from early on, and have consistently defended its morality and legality. But I have also warned that the "dreamers" won't be truly safe from deportation unless and until Congress passes a law institutionalizing the program. Until then, a hostile president can – if he tries hard enough – find a way to end DACA. The Supreme Court's 2020 decision invalidating the Trump administration's hamfisted efforts to abolish the policy made clear that a better-planned executive effort to get rid of it would likely succeed. It is also possible, though less likely, that lawsuit filed by GOP-controlled states will eventually lead the more conservative Supreme Court to rule that DACA is illegal. The 2020 decision didn't address the legality of the program itself, only whether Trump's attempts to end it violated the Administrative Procedure Act.

For those interested, here is a compendium of my writings on DACA and related issues. Unless otherwise indicated, all of these works are posts at the Volokh Conspiracy blog:

2. "Yes, Obama's Executive Action Deferring Deportation for Millions of Immigrants Is Constitutional," Reason, Apr. 19, 2016. This was part of a debate with the "other" Ilya, Ilya Shapiro, over the closely related DAPA program. The legal issues raised by the two are similar. See Shapiro's contribution  here.