[This month, I'm serializing my 2003 Harvard Law Review article, The Mechanisms of the Slippery Slope.]

Cost-lowering slippery slopes, it turns out, are a special case of a broader mechanism—the multi-peaked preferences slippery slope.

In many debates, one can roughly divide the public into three groups: traditionalists, who don't want to change the law (they like position 0); moderates, who want to shift a bit to position A; and radicals, who want to go all the way to position B. What's more, one can assume "single-peaked preferences": both traditionalists and radicals would rather have A than the extreme on the other side. We can represent the preferences as follows, which is why the preferences are called "single-peaked":

If neither the traditionalists nor the radicals are a majority, the moderates have the swing vote, and thus needn't worry much about the slippery slope. Say that 30% of voters want no street-corner cameras (0), 40% want cameras but no archiving and face recognition (A), and 30% want cameras with archiving and face recognition (B). The moderates can join the radicals to go from 0 to A; and then the moderates can join the traditionalists to stay at A instead of going to B. So long as people's attitudes stay fixed, there's no slippery slope risk: those who prefer A can vote for it with little danger that A will enable B. {I assume here that the enactment of A doesn't change people's preferences; in later posts, I will relax that assumption, and consider the possibility that enacting A might actually alter people's attitudes about B.}

But say instead that some people prefer 0 best of all (they'd rather have no cameras, because they think installing cameras costs too much), but if cameras were installed they would think that position B (archiving and face recognition) is better than A (no archiving and no face recognition): "If we spend the money for the cameras," they reason, "we might as well get the most bang for the buck." This is a multi-peaked preference—these people like A least, preferring either extreme over the middle. 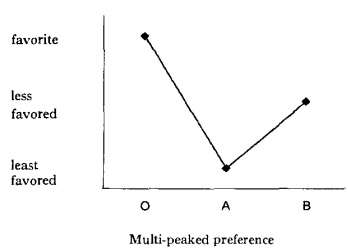 Let's also say that shifting the law from one position to another requires a mild supermajority, say 55%; a mere 50%+1 vote isn't enough because the system has built-in brakes (such as the requirement that the law be passed by both houses of the legislature, the requirement of an executive signature, or a more general bias in favor of the status quo). We can thus imagine the public or the legislature split into several different groups, each with its own policy preferences and its own voting strength; where there's a + in the columns labeled 0→A, A→B, and 0→B, that indicates that the group would vote to move from the first position to the second:

This preference breakdown is exactly the same as in the table in the first cost-lowering slippery slope post; and, as in that table, the direct 0→B move fails, because it gets only 42% of the vote (group 6), but the 0→A move succeeds with 56% of the vote (groups 3 and 6) and then the A→B move succeeds with 60% of the vote (groups 2 and 6). {Any proposed B→0 move will fail because group 2, which originally preferred 0 over B, no longer prefers it, since the money has already been spent and the cameras bought.} As before, members of group 3 must now regret their original vote for the 0→A move, because that vote helped bring about result B, which they most oppose.

Multi-peaked preferences thus make the moderate position A politically unstable—which means that implementing A can grease the slope for a B that otherwise would have been blocked.