Here's the order for A Court of Mist and Fury (with the author's address redacted); the one for Gender Queer, A Memoir is similar, and is on p. 5 of this filing. 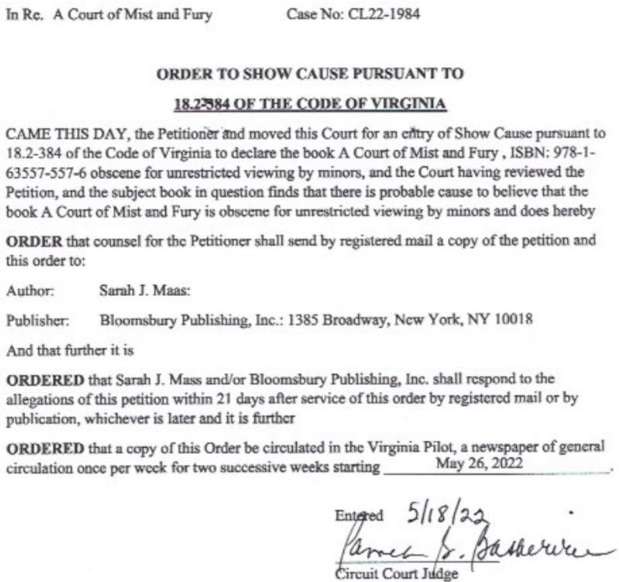 The orders were obtained by Virginia state legislator Tim Anderson and Tommy Altman, a congressional candidate; see here for Del. Anderson's post about this, which also includes excerpts of some of what he views as obscene-as-to-minors in the books. Anderson and Altman are now using the probable cause finding in seeking temporary restraining orders that would bar Barnes & Noble from engaging in "sale or distribution to minors" of the books. How would one analyze this under existing First Amendment rules (whatever one might think of them)?

[A.] The Supreme Court has held that the First Amendment does not protect the distribution of "obscenity," a narrow category that basically covers hard-core pornography. To be obscenity, a work must satisfy all three of the following elements, largely drawn from Miller v. California (1973), though with extra detail added by Smith v. U.S. (1977), Pope v. Illinois (1987), and Brockett v. Spokane Arcades, Inc. (1985):

I don't like this exception for many reasons, including that its terms are so vague; but I don't make the law, I just report on it.

[B.] The Court has also held that the law may bar distribution to minors of sexually themed material, if it fits within what is basically the Miller test with "of minors" or "for minors" added to each prong (e.g., "the work taken as a whole, lacks serious literary, artistic, political, or scientific value for minors"). Ginsberg v. New York (1968), a pre-Miller case, upheld a law that implemented the then-current obscenity test with "to minors" added at the end of each prong; most lower courts and commentators have assumed that Ginsberg plus Miller justify laws that implement the Miller-based test with "to minors" added to each prong as well.

This is a completely different exception from the one for child pornography, which focuses not on the recipient of the material but on the person depicted in the material. The child pornography exception is limited to "visual[] depict[ions]" of actual children below the age of majority (and not just fictional pictures or pictures of adults who look like children) "performing sexual acts or lewdly exhibiting their genitals." See New York v. Ferber (1982); Ashcroft v. Free Speech Coalition (2002).

[C.] This having been said, the "obscene as to minors" exception is still quite narrow. Indeed, the Virginia Supreme Court held in Commonwealth v. American Booksellers Ass'n, Inc. (Va. 1988), that

It's thus not enough that some passages are seen as appealing to a shameful or morbid interest in sex, or that the books are seen as unsuitable for younger minors. I haven't read the books, but my guess, based on press accounts, is that they shouldn't be seen as covered by Virginia obscene-as-to-minors law (despite the trial judge's finding of probable cause).

[D.] And I think it's even clearer that the First Amendment would forbid a temporary restraining order against selling the books to juveniles—an order that could, as with TROs generally, be entered based on mere probable success on the merits, rather than based on a full trial. Indeed, in Vance v. Universal Amusement Co. (1980) the Court struck down a regime that allowed such orders:

[The Texas law allowing injunctions against the showing of movies based on a showing of probable obscenity] authorizes prior restraints of indefinite duration on the exhibition of motion pictures that have not been finally adjudicated to be obscene. Presumably, an exhibitor would be required to obey such an order pending review of its merits and would be subject to contempt proceedings even if the film is ultimately found to be nonobscene. Such prior restraints would be more onerous and more objectionable than the threat of criminal sanctions after a film has been exhibited, since nonobscenity would be a defense to any criminal prosecution.

Nor does the fact that the temporary prior restraint is entered by a state trial judge rather than an administrative censor sufficiently distinguish this case from Freedman v. Maryland (1965) [a case that generally condemned such prior restraints, at least unless state law provides for procedural protections that seem absent in Virginia, and were absent in the Texas scheme struck down in Vance -EV]. "Any system of prior restraints of expression comes to this Court bearing a heavy presumption against its constitutional validity." That a state trial judge might be thought more likely than an administrative censor to determine accurately that a work is obscene does not change the unconstitutional character of the restraint if erroneously entered.

I should note that Virginia law seems to authorize the probable-cause findings entered by the judge in this case only in outright obscenity cases, and not obscenity-as-to-minors cases (which appear in a different article of the Virginia code). That might be an independent basis for invalidating the probable cause findings, and thus denying the TRO.