So reports Fox News (Kyle Morris); it's of course possible that there's some error in the reporting, but the screenshot (borrowed from a New York Post reprint of the Fox News account) seems to corroborate it: 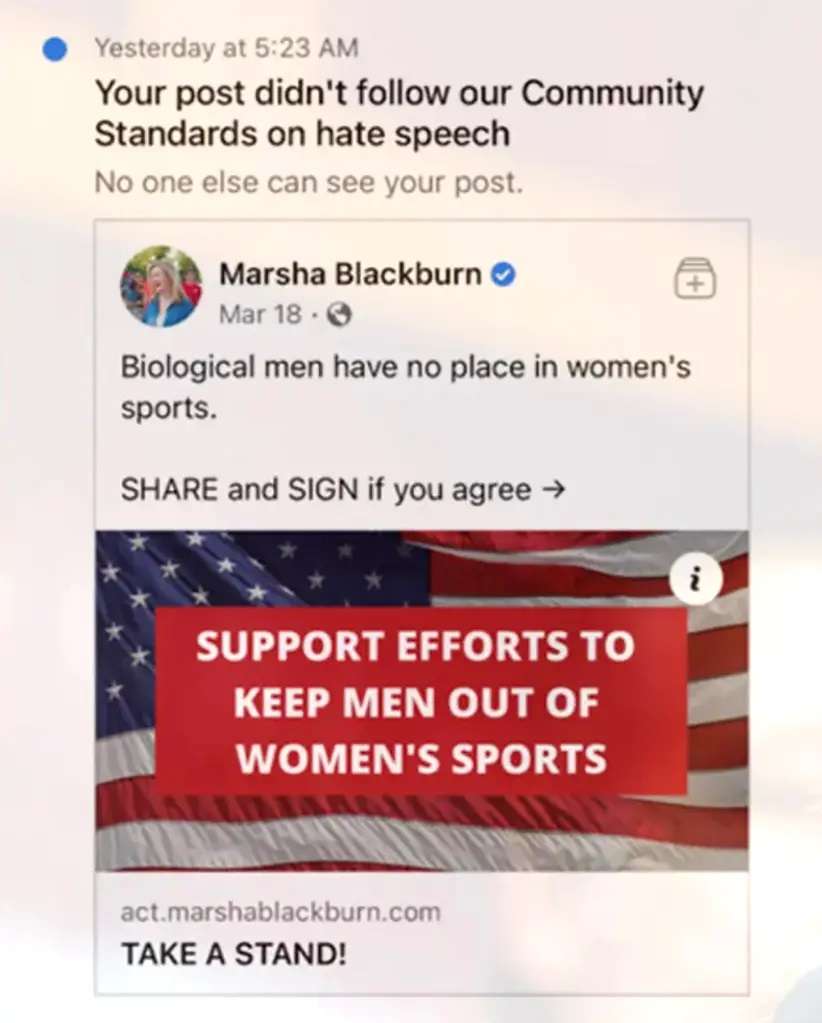 Naturally, such blocking doesn't violate the First Amendment (which governs only governmental speech restrictions) or any federal law; and, to my knowledge, it wouldn't violate any state social media nondiscrimination rules, even apart from the question whether those rules are constitutional or preempted by 47 U.S.C. § 230: The Florida and Texas laws, for instance, seem to me to cover only material posted by residents of those states.

Nonetheless, I don't think it's good for democracy that platforms with the reach and importance of Facebook (which the Supreme Court has characterized as "the modern public square") would purport to thus restrict the expression of opinions.

And that's especially so given how mainstream the opinion is: A Gallup poll from May 2021, for instance, reports that 62% of U.S. adult respondents took the view that "transgender athletes should only be allowed to play on sports teams that match their birth gender" (34% took the view that they "should be able to play on sports teams that match their current gender identity"). I realize that these measurements are always imprecise, and sensitive to the details of the question. But it seems pretty clear that this isn't some marginal, "extremist" view.

Of course, there's much to be said for the position that even views held by a small minority still need to be expressible in such places—including privately owned places that are so central to modern speech—for public debate to properly function. But at least if Facebook blocks the Nazis or the Communists, the immediate practical effect will be limited, because those views aren't major players in American public debate in any event. (Thankfully, "should we bring back the Holocaust?" or "should we have a violent Communist revolution?" aren't major topics in current American debate.)

Here, though, no-one can claim that somehow the judgment of history has been rendered and that nothing would be practically lost to public debate if a few extremists can't express their views. Nor can one argue that this is just a matter of medical consensus or of factual disinformation (though again I'd be skeptical of even those bases for restriction).

Rather, Facebook appears to be trying to suppress an important normative position on a live political issue—a view expressed by major elected politicians about what policies our democratic process should adopt. Again, not good for Facebook to try control public debate this way, it seems to me.