This specific website has posted legal paperwork about me with private information which they copied off the internet without permission.

It listed as "original URLs" https://www.newsbreak.com/news/2154080759697/arrest-of-heidi-l-holt-for-tampering-with-public-records-or-information-and-forgery and https://reason.com/volokh/2021/02/03/n-h-prosecution-for-forgery-aimed-at-getting-newspaper-articles-and-government-record-vanished-from-google-search-results/. And it stated that the "allegedly infringing URL[]" was
https://d2eehagpk5cl65.cloudfront.net/img/q60/uploads/2021/02/HoltSubmission-768×476.jpg.

It's not clear to me if this was indeed just an attempt to deindex the JPG, which is an image of an apparently forged expungement order, or was also aimed (even if inartfully) at deindexing the articles that wrote about the arrest and prosecution that stemmed from that order (including one that I wrote). In any case, here's that article of mine, which gives some backstory for this new attempt:

If you send Google a court order that finds certain online material to be libelous, Google will consider "deindexing" that material—essentially making it disappear from Google search results. The order wouldn't legally bind Google (American court orders gotten against a particular defendant don't bind third parties who aren't in league with the defendant); but Google will often choose to act on it, on the theory that a court has determined that the material is false and defamatory. To my knowledge, Google doesn't do the same for expungement orders, but people sometimes submit those orders to Google in any event.

But any successful system breeds parasites—here, attempts to procure such court orders fraudulently, or even using forgery (see this forthcoming article). Last week, a criminal complaint was filed in New Hampshire against Heidi L. Holt as to one alleged forgery:

And here is the alleged forgery (though you can see it more clearly here): 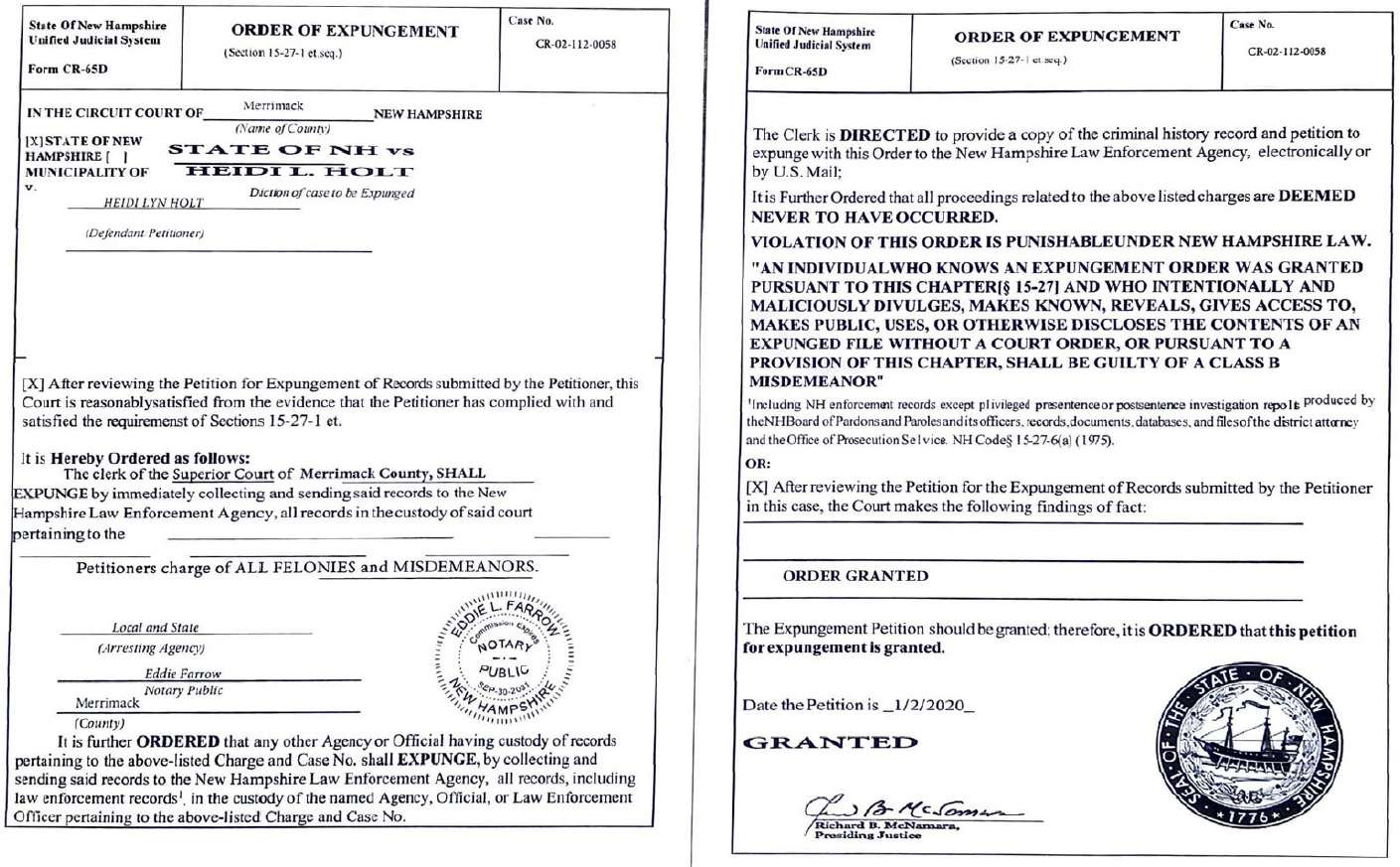 The alleged forgery was submitted to Google with a deindexing request for these pages:

https://www.spokeo.com/Heidi-Holt/New-Hampshire
https://www.nh.gov/nhdoc/divisions/parole/documents/02_27_14.pdf
https://www.laconiadailysun.com/news/courts_cops/two-indicted-on-sex-assault-charges/article_7afa1f6a-19ac-11e9-9110-1f39a8443dd1.html [note that this article mentioned Holt only in passing as part of an arrest blotter, unrelated to the headline, and the newspaper has by now apparently removed her name]
https://www.fosters.com/article/20100428/GJNEWS_01/704289912?template=ampart
https://www.docketbird.com/find-federal-court-cases/bankruptcy/district-of-new-hampshire-bankruptcy/2019/10000-10499

Holt is charged with forgery and with tampering with public records. For similar cases from past years, see here, here, here, and here.

As you might gather, I don't think there was anything improper in my posting purported "legal paperwork" that mentioned Heidi Holt's name and the alleged forgery, nor that there was any need to get anyone's "permission" before copying the information. (The information came from the Lumen Database, which archives such deindexing requests.) Indeed, this is what news outlets do all the time: Post publicly accessible information about people who are accused of crimes, without asking anyone for permission.

Of course, the careful reader might ask: If the order is indeed a forgery, might I indeed be infringing the forger's copyright by posting it? (It's not clear that this is indeed the claim being made in the DMCA takedown request, but I thought it was worth addressing in any event.)

The answer is no. First, posting such information would be a fair use, since it's central to the news coverage of the story, and since there's no effect on any market for the apparent forgery.

An author who holds their work out as nonfiction thus cannot later claim, in litigation, that aspects of the work were actually made up and so are entitled to full copyright protection….

Here, the text of the Work explicitly represents its account as historically accurate, not historical fiction. In the Work's early pages, the DeVito narrator describes the Work as the "complete and truthful chronicle of the Four Seasons." He promises not to allow "bitterness to taint the true story," and notes his "candor." Both Corbello's husband and she herself sent potential publishers cover letters emphasizing that the Work provided a behind-the-scenes factual look at the Band, promising "disclosure[ ]" of "the truth about" several events, including the "secret past that these performers successfully hid for almost three decades." Consistent with those promises of truthfulness, the Work reads as a straightforward historical account and is presented as an autobiography, with DeVito listed as a co-author. So the Work was expressly and repeatedly held out as a factual account.

Thus, someone can't frame something as an autobiography (chock full of facts that are not protectable by copyright) and then, when the purported facts from it are copied, sue claiming the work was actually fiction. Likewise, someone can't claim that a document is a factually accurate public record and then, when it's copied, require it to be taken down on the grounds that it's actually a forgery. (Again, that doesn't seem to be the claim being made here, but it's the only copyright-related claim that could be made.)

By the way, Google hasn't deindexed my article, nor has anyone removed my image, and I expect the DMCA request will continue to be ineffective.