After my spate of blog posts from Monday evening (1, 2, 3, 4), I took the time to read the apparent Dobbs draft opinion. It is a tour de force. Justice Alito meticulously dissects, and forcefully responds to, every conceivable position in favor of retaining Roe and Casey. I could teach an entire law school seminar class on this opinion. It touches on nearly every facet of constitutional law. Moreover, the opinion carefully addresses the concerns of other members of the majority. Alito cites Justice Gorsuch's book. Alito discusses safe harbor laws, which seemed important to Justice Barrett. Alito repeatedly cites Justice Kavanaugh's Ramos concurrence, and calls on returning the issue to the democratic process. This is an opinion designed to hold five, as the saying goes.

Will this opinion, or a version of it, ever see the light of day? Who knows. We are now in uncharted territory. For all we know, the Court issues a one sentence per curiam opinion overruling Roe, and remanding the case to the Fifth Circuit for further proceedings.

Still, I think the penultimate paragraph in Part IV provides the course of action going forward:

We do not pretend to know how our political system or society will respond to today's decision overruling Roe and Casey. And even if we could foresee what will happen, we would have no authority to let that knowledge influence our decision. We can only do our job, which is to interpret the law, apply longstanding principles of stare decisis, and decide this case accordingly.

In a perverse way, due to the leak, the Court can foresee what will happen when the opinion is formally released. Turn on MSNBC and log onto Twitter. We know exactly what would happen. Still, that foresight should be irrelevant. The justices lacks "authority to let that knowledge influence [their] decision." Let the press do their job. And the Justices can will do their job.

And even more perversely, Justice Kagan's dissent became much more difficult to write. Predictably, she would warn about how this decision would harm the Court's institutional legitimacy, yadda yadda yadda. But that bandaid was already ripped off. Everyone knows how this decision will be received because–again–we can watch MSNBC and doomscroll through Twitter. It will be hard for Kagan to even address this issue without talking about the draft opinion that everyone has already seen. Josh Gerstein is the elephant in the room. Politico's leak deflated the inevitable Dobbs dissent.

I do not know what Tuesday will bring, but we should hear from Chief Justice Roberts shortly. As of Monday afternoon, all nine Justices were in the Court for Justice Stevens's memorial. They may be called back to duty right away. Here they were in happier times: 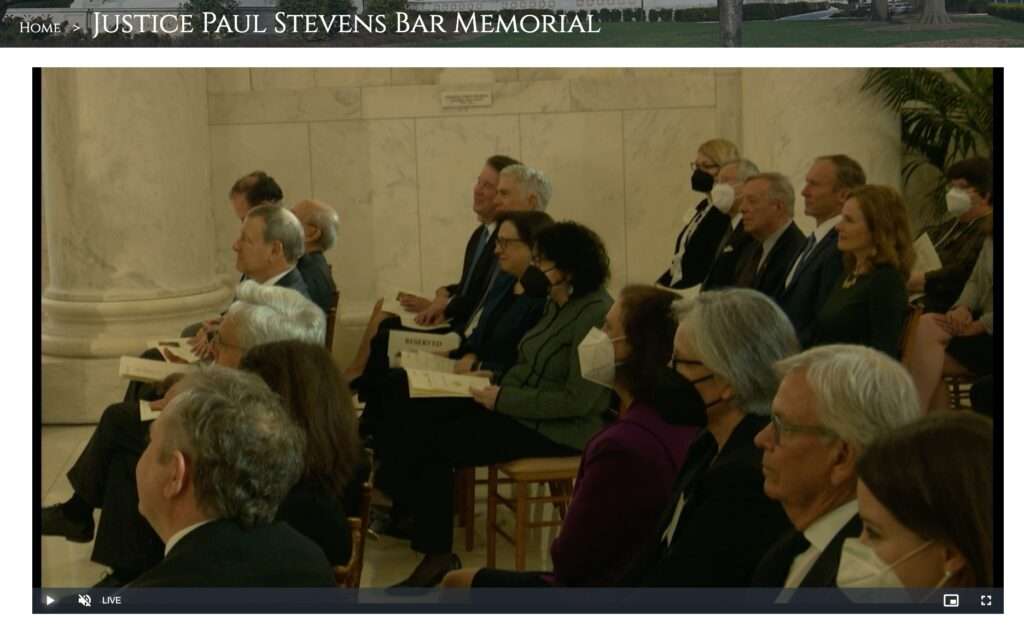