Greg Lukianoff (President of FIRE) and Prof. Nadine Strossen (former President of the ACLU) have an excellent post on this subject; here's the beginning, though it's worth reading in its entirety:

Assertion: The rise of Hitler and Nazism in Germany is an instructive example of why we should censor hateful and extremist speech.

Greg Lukianoff: Richard Delgado, an early champion of speech codes and now more famous as a founding scholar in the field of Critical Race Theory, cites the Rwandan genocide (more on this in the next entry), along with Weimar Germany, as cautionary tales against free-speech purism. The problem is that neither historical precedent supports the idea that speech restraints could have prevented a genocide.

As I explained in my review of Eric Berkowitz's excellent book, "Dangerous Ideas: A Brief History of Censorship in the West, from the Ancients to Fake News," Weimar Germany had laws banning hateful speech (particularly hateful speech directed at Jews), and top Nazis including Joseph Goebbels, Theodor Fritsch and Julius Streicher actually were sentenced to prison time for violating them. The efforts of the Weimar Republic to suppress the speech of the Nazis are so well known in academic circles that one professor has described the idea that speech restrictions would have stopped the Nazis as "the Weimar Fallacy."

A 1922 law passed in response to violent political agitators such as the Nazis permitted Weimar authorities to censor press criticism of the government and advocacy of violence. This was followed by a number of emergency decrees expanding the power to censor newspapers. The Weimar Republic not only shut down hundreds of Nazi newspapers — in a two-year period, they shut down 99 in Prussia alone — but they accelerated that crackdown on speech as the Nazis ascended to power. Hitler himself was banned from speaking in several German states from 1925 until 1927. 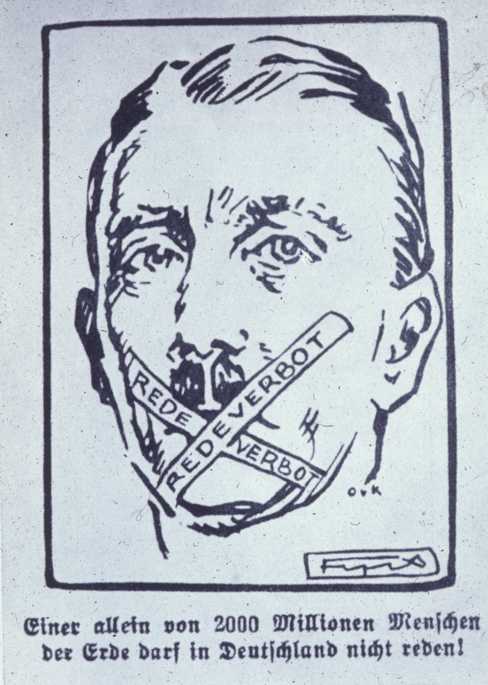 In this 1920s cartoon by Philipp Rupprecht, Hitler is depicted as having his mouth sealed with tape that reads "forbidden to speak." The text beneath this image reads, "He alone of two billion people on Earth may not speak in Germany."

Far from being an impediment to the spread of National Socialist ideology, Hitler and the Nazis used the attempts to suppress their speech as public relations coups. The party waved the ban like a bloody shirt to claim they were being targeted for exposing the international conspiracy to suppress "true" Germans. As one poster explained:

Why is Adolf Hitler not allowed to speak? Because he is ruthless in uncovering the rulers of the German economy, the international bank Jews and their lackeys, the Democrats, Marxists, Jesuits, and Free Masons! Because he wants to free the workers from the domination of big money!

Considering the Nazi movement's core ideology, as espoused by Hitler in "Mein Kampf," rested on an alleged conspiracy between Jews and their sympathizers in government to politically disempower Aryan Germans, it is not surprising that the Nazis were able to spin government censorship into propaganda victories and seeming confirmation of their claims that they were speaking truth to power, and that power was aligned against them.

Indeed, censorship that was employed ineffectively to stop the rise of the Nazis was a boon to the Nazis when it came to consolidating their power. The laws mentioned earlier that allowed Weimar authorities to shut down newspapers, and additional laws intended to limit the spread of Nazi ideology via the radio, had their reins turned over to the Nazi party when Hitler became chancellor. Predictably, the Nazis used these preexisting means of censorship to crush any political speech opposing them, allowing for an absolute grip on the country that would have been much more difficult or impossible with strong legal protections for press and speech….