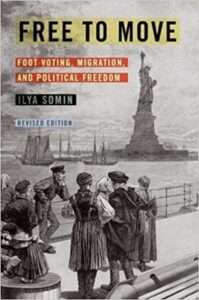 The American Enterprise Institute has posted a video of a recent event they hosted, at which I spoke about my book Free to Move: Foot Voting, Migration, and Political Freedom. The event included commentary by Emily Hamilton of the Mercatus Center (a leading expert on housing policy), and economist Filipe Campante of Johns Hopkins University. Economist  Stan Veuger of AEI moderated.

Unlike many of the other events I have done about the book, in this one the commentary and discussion focused primarily on the implications of my argument for internal freedom of movement, rather than international migration. For example, there was extensive discussion of the extent to which zoning reform can increase opportunities for foot voting and increase US economic growth, and whether private planned communities, such as HOAs, expand foot voting options or potentially constrict them.

The revised edition of Free to Move is now available on Amazon for a mere $9.35. Vote with your feet for this deal, while it lasts! Makes a great graduation present for students interested in migration policy, federalism, democracy, self-determination, and other topics covered in the book. As always, 50% of all royalties generated by Free to Move go to help refugees. With Russia's brutal war of aggression against Ukraine, the need is now greater than it has been in many years.