Just in time for opening day of baseball, New York City has exempted athletes from its citywide vaccine mandate. Now Kyrie Irving and other unvax'd athletes can play in professional sports. Meanwhile, all other employees in the stadiums are subject to the requirement. The New York Post captured the scene with the headline, "Tale of Two Citis." 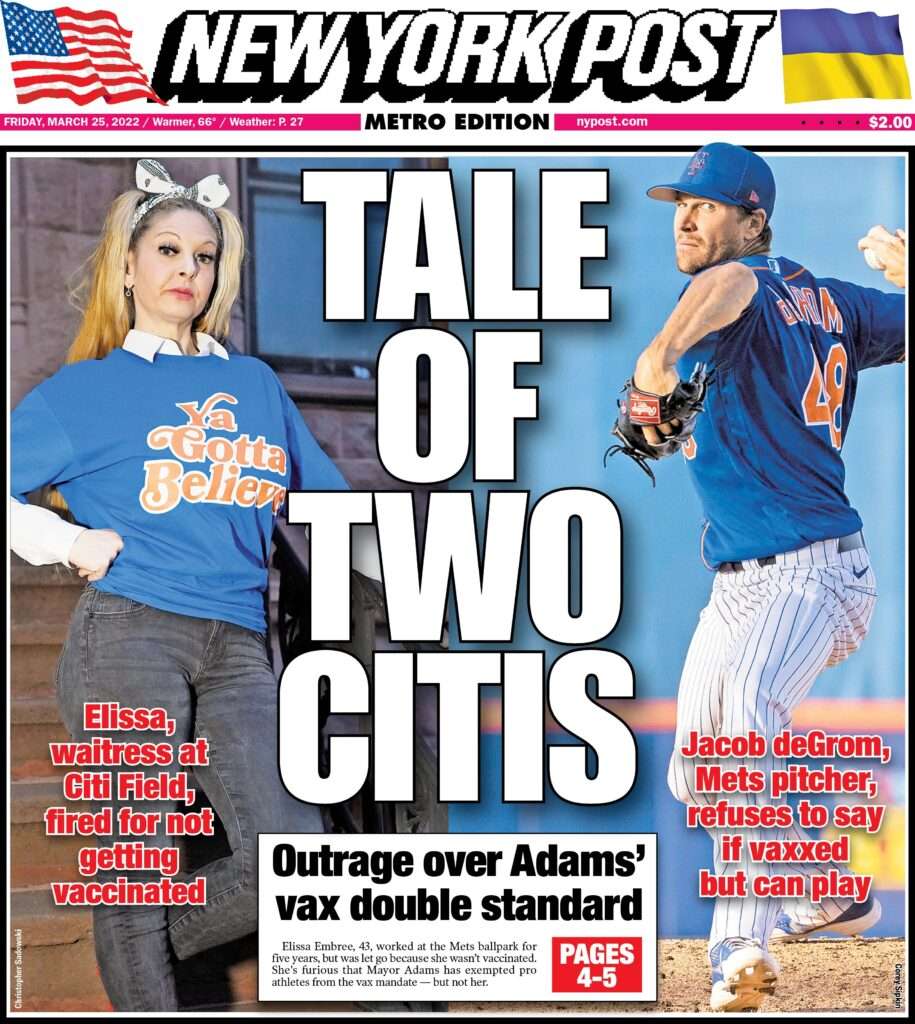 New York City Mayor Eric Adams was quite candid why he created an exemption for rich athletes, but not other people, including those with sincerely held religious beliefs:

"A small number of people have an outsized impact on our economy."

Yes, he said the quiet part out loud. From the earliest days, of the pandemic. COVID policy was always dictated first by the policy preferences of those in power, and second by #science. The Governor of Pennsylvania deemed the Peeps marshmallow factory to be an "Essential" business, but gun stores were not. Governor Cuomo allowed 7,000 fans to watch a Buffalo Bills game, even as people were barred from assembling for religious gatherings. And now, the Mayor created a Kyrie carveout to help wealthy athletes. Oh, and the Yankees, Mets. and Yankees have been lobbying the Mayor to change the policy.

But privately, efforts were already underway by the owners and executives of some of the wealthiest and most influential sports franchises in the country to persuade Mr. Adams to change his mind.

The Yankees president, Randy Levine, personally reached out to the mayor's team and encouraged officials to consider that baseball is played outdoors where Covid transmission rates are lower than indoors.

Steven A. Cohen, the hedge fund manager and Mets owner who last year gave $1.5 million to a super PAC supporting Mr. Adams's mayoral campaign, has been paying $10,000 a month to a lobbying firm, Moonshot Strategies, to push state officials and City Hall on several issues, including Covid protocols.

Both baseball teams are believed to have players who remain unvaccinated, with opening day now two weeks away.

Corey Johnson, the former speaker of the City Council who now runs his own lobbying firm, is receiving $18,000 a month from the Nets's holding company, and lobbying records suggest that he recently contacted the mayor, his chief counsel and his chief of staff.

Yet, more than 1,500 city employees were fired for not being vaccinated. They probably were not able to afford such an expensive lobby effort. Rent seeking is tough.

In light of Fulton, these exemptions for athletes undermine the state's compelling interest to mandate vaccines. But don't worry. The mayor checked with his lawyers:

Dr. Jay Varma, an epidemiologist and health adviser to Mr. de Blasio, wrote on Twitter on Wednesday evening that vaccines work "unless you're rich and powerful, in which case lobbying works."

Dr. Varma called the new policy the "Kyrie Carve Out" and said he was concerned that the legal standing of the city's vaccine mandates could now be challenged in court as "arbitrary and capricious."

Mr. Adams rebutted that criticism on Thursday: "I would not be standing here today if I did not speak to the attorneys, and they said that this passes legal muster."

Sooner or later, a case will come to the courts that is not on an emergency basis. For example, an employee who lost his pension due to the termination will sue for damages. And in light of Fulton, and the Kyrie Carveout, the employees should prevail.