This series was originally written and posted in March 2019, after intersex athlete and Rio Gold Medalist Caster Semenya's hearing at the Court of Arbitration for Sport (CAS). Since then, it has been confirmed that none of the medalists in the women's 800 meters in Rio were biologically female; put differently, both the men's and the women's podiums in that event were swept by athletes who are biologically male.

Also since I wrote last, the focus of the scientific work has been less on intersex athletes and more on transgender women and girls—specifically the extent to which it's possible to mitigate male-sex linked performance advantages through testosterone suppression and/or gonadectomy. Testosterone (T) is the hormone we love to hate, and recently there's been a lot of hate, including from activists in the academy, at the ACLU, and elsewhere who have cynically spun and thoroughly politicized the science. Thankfully, relevant experts have stepped up to the plate to right many of those wrongs, including Carole Hooven at Harvard, Emma Hilton, Ross Tucker, and Joanna Harper. We can and should argue about what to do with results data and science facts, but prevarication about what they are is not the stuff of good policymaking.

To borrow from a 2019 NYT editorial about anti-vaxxers, "sometimes it's ok to get out of the grey zone." Scientists are generally "uncomfortable with black-and-white statements, because science is all about nuance." But in the case of sex and sport, "there are some hard truths that deserve to be trumpeted." There is a significant performance difference between males and females from puberty onward. Testosterone is the primary driver of that difference. There is a wide gap, no overlap, between the male and female T ranges. Sex may not be binary for all people or for all purposes. But for sport, what most of us mean when we say "sex" is actually what matters, and that sex is undeniably binary: you either have testes and functional androgen receptors, or you don't. "Full stop."

In a nutshell, from Sex in Sport:

The "normal human fetus of either sex has the potential to develop either male or female organs, depending on genetic and hormonal influences." Specifically, "all developing embryos become feminized unless masculinizing influences [androgens] come into play at key times during gestation." Sex differentiation, defined in the first instance as the development of the testes, is triggered by the SRY gene which is present on the Y chromosome…. Testicular production of testosterone is primarily responsible for the difference in male and female testosterone levels, both during development and throughout the individual's lifetime…. [A]lthough males and females both produce testosterone, males have a lot more because the testes produce more than ovaries, adrenal glands, and cysts or tumors.

The following figure, also from Sex in Sport, demonstrates what we mean by "a lot more":

On average, even in the elite athlete population, males have 30 times more T than females. This includes both transgender women and girls starting from the onset of puberty, and 46-XY males with the two differences of sex development (DSDs) that are most relevant for sport: 5ARD (alpha-reductase deficiency) and PAIS (partial androgen insensitivity). The Gold, Silver, and Bronze medalists in the women's 800 meters in Rio—Caster Semenya, Francine Nyonsaba, and Margaret Wambui—are all suspected of having the former condition. They are not "hyperandrogenic females." The latter are represented on the figure as 46-XX females with PCOS (polycystic ovaries) and CAH (congenital adrenal hyperplasia).

This difference in T levels is responsible for the performance gap. Specifically, the sports science community is in wide agreement on the following three points, which they regard as our equivalent of judicially noticeable facts:

Third, the primary reason for these sex differences in the physical attributes that contribute to elite athletic performance is exposure in gonadal males with functional androgen receptors to much higher levels of testosterone during growth and development (puberty), and throughout the athletic career. No other endogenous physical or physiological factors have been identified as contributing substantially and predominantly to these differences.

This figure from andrologist David Handlesman shows the relationship between the onset of male puberty and the development of the performance gap:

Wickliffe Shreve, Jeff Wald, Richard Clark, and I developed the next figure to bring these science facts to life. The figure marks the individual lifetime bests of three well-known female Olympic Champions in the 400 meters—Sanya Richards-Ross, Allyson Felix, and Christine Ohuruogu—in the sea of male-bodied performances run just in the single year 2017. It shows that the women would lose to the very best senior men that year by about 12%. But it also shows that even at their absolute best, they would go on to lose to literally thousands of other boys and men beginning at 0.1%. 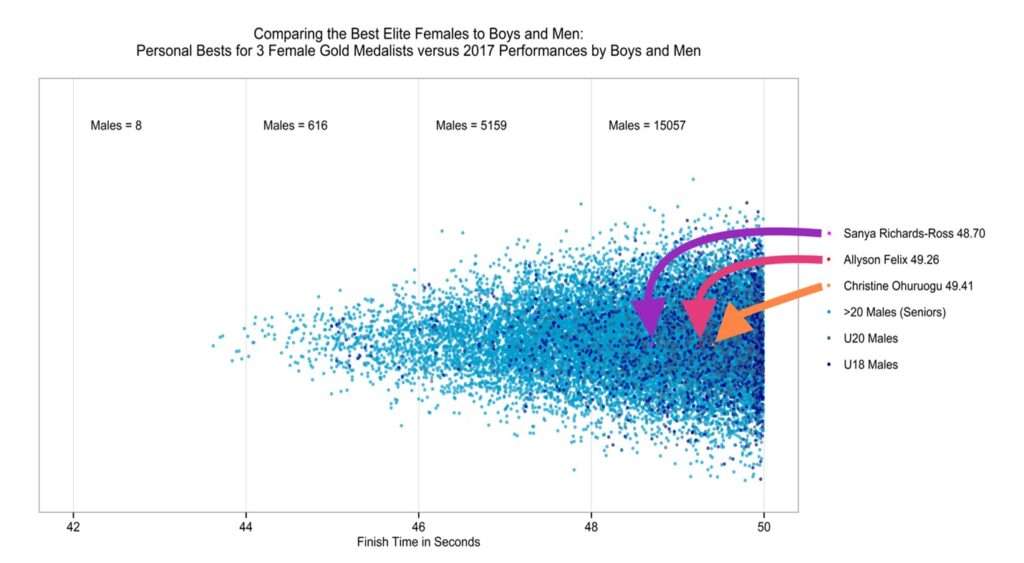 Advocates for an identity-based eligibility rule argue—without any basis in the physical sciences, mind you—that the dominance of male-bodied athletes over female-bodied athletes is not necessarily due to their testosterone ('T') levels, i.e., that T is no more determinative of outcomes in sport than are other advantageous traits. Unless the point is the also-basic one that as between any two individuals—e.g., Allyson Felix and a random non-elite male who runs about the same times she does—T is not necessarily dispositive, this argument has no merit. As I suggested in a NYT analysis piece last year, "Pick your body part, your geography, and your socioeconomic status and do your comparative homework. Starting in puberty there will always be boys who can beat the best girls and men who can beat the best women."

Because the anti-T crowd often uses swimmers to illustrate their point, I'll close with this from Sex in Sport:

[T]he performance gap holds even when we adjust for the fact that the best elite athletes are "freaks of nature" and that their success can be largely attributed to their unusual physical traits. Sex, specifically testes and their effects, matter in ways that other biological differences among athletes do not.

For example, swimmer and multiple Gold Medalist Missy Franklin is six feet two inches tall with a wing span of six feet four inches. Her world record in the 200 meters backstroke, set at the 2012 Summer Olympics in London, is 2:04.06. Ryan Lochte's world record, set at the 2008 Olympics in Beijing, was a full nine seconds faster at 1:53.94. If Franklin had been in that race, at her best she would have been about a half a lap behind Lochte when he finished, even though they are the same height and have just about the same wingspan.