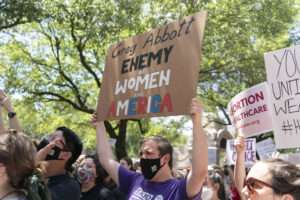 Last night's 5-4 Supreme Court ruling in Whole Women's Health v. Jackson did not overrule Roe v. Wade or make any kind of decision on the scope of the right to abortion. But it did refuse to issue a preliminary injunction against the enforcement of SB 8—Texas' sweeping new law barring nearly all abortions that take place later than six weeks after the beginning of pregnancy. While SB 8 is clearly inconsistent with Roe and other Supreme Court abortion precedents, the five conservative justices in the majority refused to issue an injunction blocking it, because of the law's unusual enforcement mechanism. This ruling could potentially set a dangerous precedent that threatens numerous other constitutional rights. Fortunately, there are ways to mitigate that risk.

Instead of giving state officials the power to enforce the law, SB 8 delegates enforcement entirely to private parties, who can bring lawsuits against abortion providers, and get $10,000 or more in damages for each abortion. As the Supreme Court majority notes, this makes it difficult to issue an injunction against the law, because such injunctions are usually directed against specific people or entities who enforce laws, or have plans to do so. In this case, however, no government official has enforcement authority, and it is not possible to identify a specific private party who plans to enforce it, either. The one private defendant in the present case—a prominent Texas pro-life activist—claims he has no plans to bring any SB 8 lawsuits himself. Even if the Court had enjoined this particular individual from bringing SB 8 lawsuits, that would not prevent other people from doing so.

This approach to injunctions is closely related to the Supreme Court's precedent on the doctrine of "standing," which  holds that plaintiffs can only bring cases in federal court if they have suffered an actual or imminent "injury." Here, arguably, there was no such injury because neither the government nor a private party had taken any steps to enforce SB 8 against them, and it is far from clear that anyone will do so in the future. The four dissenting justices in last night's ruling make several good points. But, at least as far as I can tell, they don't have an answer for this particular procedural dilemma.

For a more detailed explanation of the procedural obstacles to challenging SB 8, see this excellent article by Charles "Rocky" Rhodes and Howard Wasserman. The authors (like me) are opposed to the Texas law. But they nonetheless conclude that existing Supreme Court precedent makes it difficult or impossible to use "offensive" litigation to block its enforcement. In a recent blog post, Wasserman points out the following about last night's ruling:

[Justice] Breyer [in his dissent] says a case could proceed against 'those particularly likely to exercise the delegated powers.' This is correct. The problem is no such person has been identified. When[one] has been, I think a § 1983 action can proceed, including enjoining any pending state proceeding. At the same time, that does not really help–even if WWH identified likely enforcers and got interim relief against them, that interim relief cannot stop anyone else from enforcing in the interim.

In my view, last night's ruling was wrong because Court's general approach to standing and injunctions is wrong. I have previously summarized my objections to current "standing" rules, which are not actually required by anything in the text or original meaning of the Constitution, and also cannot be justified based on pragmatic considerations.

Similar criticisms apply to the Court's approach to injunctions. Even if we do not know which individuals, if any, plan to enforce an unconstitutional law, or have the authority to do so, a court should be able to issue a general injunction precluding enforcement of that law by anyone who might otherwise be in a position to undertake that task.

If it turns out that no one is willing or able to enforce it, then the injunction will be unnecessary, but also won't do any harm; it would, in that scenario, forbid something no one was going to do anyway. But such a general injunction could play a valuable role in forestalling violations of constitutional rights in situations where it is difficult to predict in advance who the violators will be.

Unfortunately (or, happily, depending on your point of view), it's unlikely the Supreme Court will adopt this approach to standing and injunctions anytime soon. If it does not, and Texas' SB 8 ploy works, it could potentially set a precedent for other state laws circumventing constitutional rights. The tactic pioneered by Texas could be copied by red and blue states alike.

It is not difficult to think of ways liberal states can take advantage of this strategy. Constitutional law scholar Michael Dorf outlines possibilities involving gun rights and "hate speech":

For example, contrary to McDonald v. Chicago, New York could ban possession of all handguns and grant any person the right to sue someone found to possess a handgun for $10,000 per day the handgun is possessed, while forbidding public enforcement. Massachusetts could ban hate speech defined in a way that violates RAV v. St. Paul and use the same enforcement mechanism.

Blue states could also use the same approach to get around the Supreme Court's First Amendment rulings on campaign finance, such as the Citizens United decision. Simply authorize any resident of the state to file a lawsuit against anyone who spends more than X dollars on campaign-related ads, and allow successful plaintiffs to claim $10,000 in damages for every $1000 of "excessive" spending on political advertising they uncover. If the SB 8 gambit works, conservatives might yet rue the day they set this dangerous precedent.

Red states, of course, can play the same game on issues that go beyond abortion. Almost any constitutional right can potentially be attacked in similar ways.

To be clear, the problem here is not simply that Texas is using private law suits as an enforcement mechanism. Many laws—including many supported by the political left—rely heavily on enforcement by private litigants. That is true of numerous environmental regulations, consumer protection laws, and land-use restrictions, among others. California's notorious CEQA statute empowers NIMBYs (who in that state tend to be left-wing) to use private litigation to block new housing construction and other development. This exacerbates that state's serious housing shortage, and even leading to such absurd outcomes as a court ordering UC Berkeley to freeze enrollment.

Thus, condemnations of SB 8 for empowering private "vigilantes" are off-base, unless you also disapprove of the many other laws that  use private litigants as enforcers. I'm old enough to remember when conservatives denounced environmental and civil rights laws that utilized "private attorneys general," while many on the left defended them as essential regulatory tools. On both right and left, attitudes towards the use of private litigation as an enforcement mechanism often depend on whose ox is being gored.

The troubling aspect of SB 8 is not the use of private enforcement, as such, but the resort to it as a mechanism for evading judicial review. The danger is that this tool will be copied by other jurisdictions, and used to undermine a variety of other constitutional rights.

Fortunately, this risk can be mitigated, even if not entirely eliminated. As Rhodes and Wasserman explain at some length, abortion providers can still challenge the constitutionality of SB 8 "defensively"—in the course of defending against lawsuits brought by private plaintiffs authorized by the bill. If such a lawsuit is brought against them, the defendants can argue (correctly!) that SB 8 is inconsistent with Roe and other Supreme Court precedents, and potentially prevail on that basis. Similar "defensive" strategies can be used by people resisting encroachments on other constitutional rights that might be authorized by states that try to copy the SB 8 model.

The problem is that the mere threat of litigation can have a "chilling effect" precluding people from exercising the rights in question.  Many Texas abortion providers have apparently preemptively stopped scheduling abortions that violate SB 8, even before any lawsuits have been brought against them. As Michael Dorf notes, this chilling effect might be especially great in the SB 8 case, because there is a chance that the Supreme Court will ultimately uphold the law on the merits, by overruling or severely limiting Roe v. Wade. The same might be true in other areas of law, where existing doctrine is sufficiently unclear or controversial that defendants in SB 8-style lawsuits cannot be certain of ultimately prevailing on the merits.

There is no perfect solution to this problem. But it can be mitigated. In the SB 8 case, leading pro-choice organizations such NARAL, the ACLU, and the National Organization for Women, can commit to providing high-quality pro bono legal representation for abortion providers who choose to defy SB 8 and open themselves up to lawsuits as a result. They could also commit to paying the defendants' fines, should the latter ultimately lose. These and other organizations have large enough war chests, I believe, to make such a commitment possible.

The promise of pro bono representation and compensation for damages should change the incentives of abortion providers, and greatly reduce any chilling effect. And the prospect of facing a well-funded, highly capable opposition might deter many potential plaintiffs from utilizing SB 8 in the first place.

If other states, whether red or blue, use similar tactics to target other constitutional rights, activist organizations in the relevant field could commit to similar strategies. Gun rights organizations could offer similar protection for gun owners, free speech advocates for targets of legislation restricting speech rights, and so on.

This strategy may not work in every case. In particular, it won't work in situations where the constitutional rights targeted lack well-organized supporters with deep pockets. But it can potentially work in a wide range of situations. Many of the rights most likely to come into the cross-hairs of partisan state governments do have supporters with the resources needed to implement this counter-strategy. That's certainly true of gun rights and free speech rights, among others.

My strategy would not preclude the Supreme Court (or other courts) from simply ruling against abortion rights (or other constitutional rights claims) on the merits. If the Court wants to overrule Roe v. Wade because a majority of justices think it's a terrible decision, they can still do so. The same goes for Citizens United, decisions protecting gun rights, and so on. The purpose of my proposal is not to freeze any particular precedent in place, but to forestall the use of private enforcement mechanisms as a tool for evading judicial review of laws that threaten constitutional rights, and in the process creating dangerous "chilling effects."

That's a goal worth pursuing regardless of what you think of Roe v. Wade and abortion rights. Even if you welcome Texas' circumvention of Roe, you might not be so happy to see the same tools used to threaten constitutional rights you care about more.

They Came to the U.S. Legally as Children. At 21, They Face Deportation.