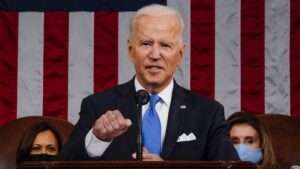 Yesterday, President Biden belatedly announced he is going to keep his promise to raise the refugee cap for the rest of the current fiscal year to 62,500, after previously having backtracked on it:

President Joe Biden on Monday announced he would move to increase the annual refugee cap set by former President Donald Trump, who had limited admissions to a historically low 15,000 refugees during his time in office.

Biden's announcement came after he received heavy criticism last month when he revealed he would keep Trump's cap in place after promising to expand it by more than 300 percent. Today he said he would reverse course again and attempt to meet that earlier promise, although he said it likely wouldn't happen by September 30, the end of the fiscal year.

"Today, I am revising the United States' annual refugee admissions cap to 62,500 for this fiscal year," he said in a statement. "The sad truth is that we will not achieve [that goal] this year. We are working quickly to undo the damage of the last four years. It will take some time, but that work is already underway. We have reopened the program to new refugees…."

The president's April announcement confused many, not least of which because his purported explanation didn't square with reality. The New York Times reported that his administration cited the influx of unaccompanied migrant children at the border as putting too much of a strain on the refugee system.

"The refugee program and the unaccompanied child program are separate items in the HHS budget," David Bier, a research fellow at the Cato Institute's Center for Global Liberty and Prosperity, told me last month. "This is purely about politics."

As I explained in a post last month, the Biden administration has made important progress on reopening America to immigration after the awfulness of the Trump era. But the broken promise on the refugee cap is one of several areas where Biden has fallen seriously short.

Monday's announcement begins to rectify this error. The President also committed to reaching a figure of 125,000 for the next fiscal year. But much more remains to be done. Sadly, as Biden admits, the administration probably won't even be able to reach the 62,500 figure. That is in large part because they dithered for so long.

Biden's plan to raise refugee admissions to 125,000 per year would be a major improvement not only over the record lows reached under Trump, but even over Obama-era figures. But it is still well short of the 208,000 a much smaller and poorer US population admitted in 1980, or the 160,000 admitted under that notorious left-wing radical Ronald Reagan in 1981.

More fundamentally, there is no good reason why the number should be capped or why the cap should be left up to the whims of whoever happens to occupy the White House in any given year. Rather, the federal government should allow private organizations to sponsor as many refugees as they want, thus saving the maximum possible number of people from tyranny and oppression, while minimizing any burden on the public fisc. Private refugee sponsorship has worked well in Canada, and could do the same for the US. Even under the current system, refugees make valuable contributions to the economy and end up adding more to public coffers than they take out.

To his credit, President Biden has actually instructed the State Department to begin working on a private refugee sponsorship program. But it is not yet clear how far this initiative will go.