Here's a brief description of the event:

Some degree of significant climate change is inevitable. Even aggressive greenhouse gas emission reduction strategies will not eliminate the need to adapt to ongoing environmental changes. Adaptation will be an essential element of the climate policy toolkit. In the new book, Adapting to Climate Change: Markets and the Management of an Uncertain Future, economist Matthew Kahn explores how decisions about where we live, how our food is grown, and where new business ventures choose to locate are impacted by climate change and suggests new ways that big data can be deployed to ease energy or water shortages to aid agricultural operations and proposes informed policy changes related to public infrastructure, disaster relief, and real estate to nudge land use, transportation options, and business development in the right direction. The law, however, is not always attentive to ecological demands, and to the broader environmental changes wrought by climate change. How climate adaptation occurs will be influenced and shaped by legal rules, both in the context of environmental law and more broadly.

In this webinar, Matthew Kahn, Bloomberg Distinguished Professor of Economics and Business, and Robin Craig, James I. Farr Presidential Endowed Professor of Law, will examine the law and economics of climate adaptation.

It is hard for me to think of two people I would rather discuss and learn about climate adaptation with than Kahn and Craig, so please join us for what will be a fascinating conversation.

The webinar is free and CLE approval in Ohio is pending. Registration information is here. 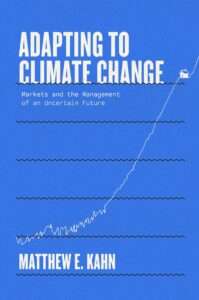