{The following statement of facts is derived from Plaintiff's Complaint, the allegations of which the Court must accept as true in ruling on the instant Motion to Dismiss.} On February 26, 2012, twenty-nine year-old George Zimmerman discharged a single shot to stop seventeen year-old Trayvon Martin from assaulting him, following an incident between the two at the Retreat at Twin Lakes townhome community in  Sanford, Florida where Zimmerman lived and was a member of the neighborhood watch.

Zimmerman was charged with second-degree murder and acquitted by a jury on July 13, 2013. He and his family have been the target of death threats ever since. Due to the massive publicity after the shooting, the nationwide protests demanding his arrest without cause, the subsequent 2013 trial and his acquittal of all charges, and the acts of protest and violence that continue to this day in the name of Trayvon Martin, Zimmerman alleges that his name is 100% synonymous with Trayvon Martin and the incident that resulted in Martin's death.

The actions giving rise to this lawsuit occurred on February 5, 2020. That day, defendant Pete Buttigieg made the following tweet:

Buttigieg is an American politician and was a 2020 candidate for the Democratic Party nomination for President of the United States of America. He allegedly had 1,600,000 followers on … Twitter ….

Elizabeth Warren, a nationally known public figure and 2020 candidate for the Democratic party nomination for President of the United States, also tweeted about Trayvon Martin that day. She tweeted the following statement to her 3,600,000 followers on Twitter: 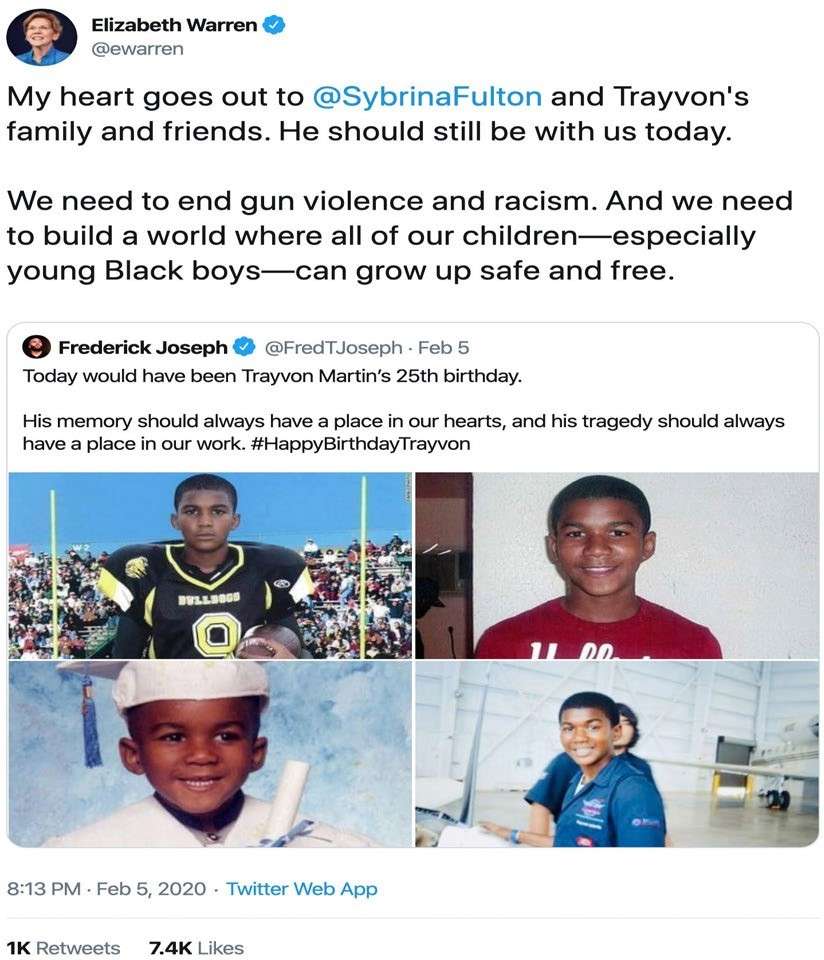 The court dismissed the lawsuit because it concluded that it lacked personal jurisdiction over Buttigieg and Warren, but in a way that should be easily cured by amendment:

The parties have both discussed the Florida Supreme Court's ruling on a very similar case, Internet Sols. Corp. v. Marshall (Fla. 2010)[, which held] … that "allegedly defamatory material about a Florida resident placed on the Web and accessible in Florida constitutes an 'electronic communication into Florida' when the material is accessed (or 'published') in Florida." …

"In the context of the World Wide Web, given its pervasiveness, an alleged tortfeasor who posts allegedly defamatory material on a website has intentionally made the material almost instantly available everywhere the material is accessible. By posting allegedly defamatory material on the Web about a Florida resident, the poster has directed the communication about a Florida resident to readers worldwide, including potential readers within Florida. When the posting is then accessed by a third party in Florida, the material has been "published" in Florida and the poster has communicated the material "into" Florida, thereby committing the tortious act of defamation within Florida." …

The Eleventh Circuit has since followed this reasoning, though in an unreported decision, in finding that personal jurisdiction did not exist based on the plaintiff's allegations as to defamation….

Applying the rationale of the Florida Supreme Court in Internet Sols., the Court finds that Zimmerman has not pleaded sufficient facts to show that Defendants committed a tortious act within Florida such that long-arm jurisdiction exists. The complaint alleges merely that Defendants' tweets received national media coverage, and in particular in the state of Florida, including but not limited to Polk County. There is not one allegation that either tweet was directed to a specific person in Florida or accessed by a person in this forum.

{The Court notes that Warren's tweet is specifically directed to Trayvon Martin's mother, Sybrina Fulton, by use of "@SybrinaFulton," which is in blue font and indicates she is a user of the platform. Additionally, "Trayvon's family and friends" are also referenced in the tweet. This distinguishes Warren's Tweet from that of Buttigieg, which does not reference any specific person or group. However, there is still no indication that Sybrina Fulton and/or Trayvon's family and friends were residing in Florida at the time of the tweets, and the Court will not infer such.} The mere fact that the material was accessible in Florida is not enough to plead the publication element of defamation, and therefore, the commission of a tortious act in this state…. Having determined that long-arm jurisdiction [under Florida law] does not exist, the Court need not address whether the exercise of jurisdiction would offend the Due Process Clause of the Fourteenth Amendment to the United States Constitution.

I expect that the Tweet was indeed read in Florida, by some of the millions of Buttigieg's and Warren's followers, so I would think that Zimmerman might be able to amend the Complaint to so allege. And on two substantive points, the court ruled in favor of Zimmerman:

[1.] Defendants argue that their tweets are not about Zimmerman, do not mention his name at all, nor imply anything about him. This argument relates to the second element of the tort, falsity, as the false statement must be of or concerning the plaintiff…. [But] it does not appear that there is a strict requirement, in Florida, that the author of the defamatory publication specifically identify a person by name for the statement to be actionable…. Certainly, a tortfeasor could juxtapose a series of facts in such a way that a specific person is identifiable even though that person's name has not been used….

[T]he complaint alleges generally that "[t]he name 'George Zimmerman' is 100% synonymous with Trayvon Martin and the incident that resulted in the death of Trayvon Martin." Taking this allegation as true, Zimmerman plausibly alleges that the tweets, when considered as a whole, included an implied or indirect reference to him due to the incident resulting in Trayvon Martin's death. As such, the Court disagrees that the failure to name Zimmerman in the tweets subjects the claims to dismissal.

[2.] Defendants' next argument, that the tweets are true statements, questions, and pure opinion, is a challenge to the falsity element of defamation…. Zimmerman alleges that because of his role in Martin's death, these tweets promote the idea that he killed Trayvon Martin because of racism or white supremacy. He also alleges that a jury acquitted him based on evidence he was acting in self-defense. While the statements, taken alone, are true, the complaint plausibly alleges that when taken together they could suggest what Zimmerman contends.

Moreover, construing the allegations of the complaint as true, it is not clear that the tweets constitute pure opinion. "Under Florida law, a defendant publishes a 'pure opinion' when the defendant makes a comment or opinion based on facts which are set forth in the publication or which are otherwise known or available to the reader or listener as a member of the public. Mixed expression of opinion occurs when an opinion or comment is made which is based upon facts regarding the plaintiff or his conduct that have not been stated in the publication or assumed to exist by the parties  to the communication." "[A] speaker cannot invoke a 'pure opinion' defense, [however,] if the facts underlying the opinion are false or inaccurately presented." …

Zimmerman alleges that the American public is very knowledgeable of the facts surrounding the 2012 incident in which Trayvon Martin died. This appears to support a finding that Buttigieg and Warren offered their opinions based on facts available to members of the public.

However, it is not clear at this stage of the litigation that the facts underlying the conclusions as to white supremacy, racism, prejudice, and fear are available to the public, such that they transform the entirety of the statements into ones of mixed expression. Because the Court must construe the statements in their totality, including the circumstances surrounding the publication, and must examine all the words used in the publication, this issue is best determined on a motion for summary judgment….

Zimmerman has until March 9 to file an amended complaint.