In 1993 Donald Trump reached a "use agreement" with Palm Beach Florida that restricted the use of Mar-A-Lago. This document appears to be a covenant. Article II, titled "Club use," imposes restrictions on the use of the guest suites on the property:

The use of guest suites shall be limited to a maximum of three (3) non-consecutive seven (7) day periods by any one member during the year.

Generally, Article II empowers Trump. Here, it restricts him. In other words, a member can only live in a guest suit for three, non-consecutive one-week periods. The intent here is to prevent Mar-A-Lago from being used as a permanent home. Or, to put it in Property lingo, Orangeacre shall not be used for residential purposes. (Blackacre just didn't seem to fit here). And, the document was signed by President Donald J. Trump. (President of the Mar-A-Lago Club, Inc., that is). 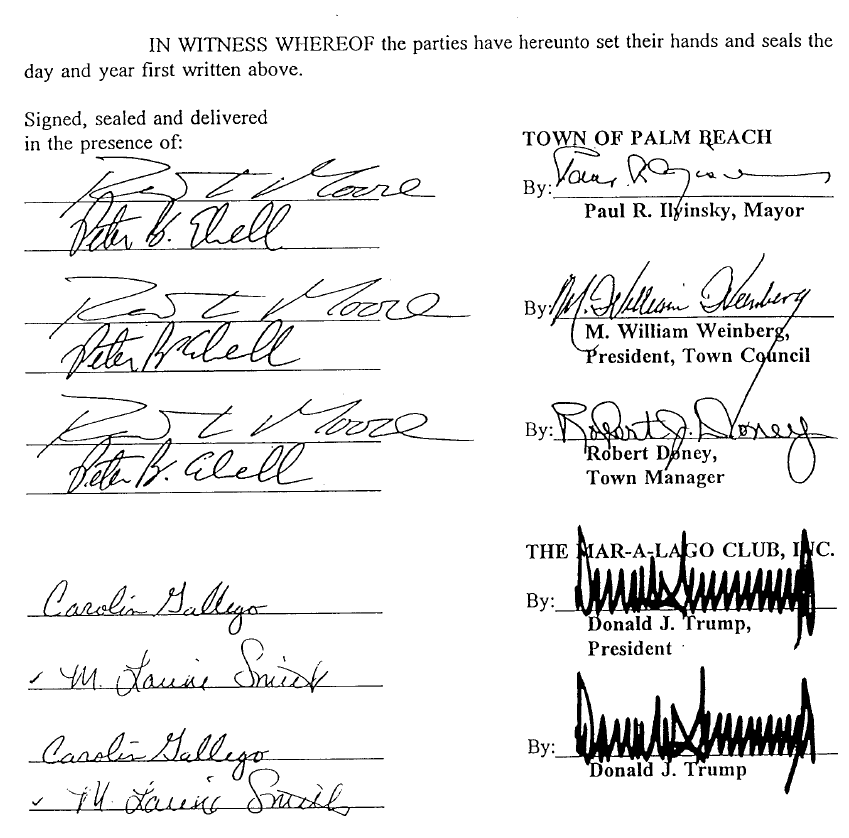 President Trump has announced that he plans to live in Mar-A-Lago after he leaves the White House (on or about January 20, 2021).

Now, neighbors have complained, and seek the enforcement of the covenant:

Neighbors of Mar-a-Lago sent a letter to the Town of Palm Beach and the U.S. Secret Service on Tuesday complaining that Mr. Trump has violated the 1993 agreement he made with the town that allowed him to convert the property to a moneymaking club.

"Per the use agreement of 1993, Mar-a-Lago is a social club, and no one may reside on the property," wrote Reginald Stambaugh, a lawyer representing the DeMoss family, which has a property next to Mar-a-Lago.

"To avoid an embarrassing situation for everyone and to give the president time to make other living arrangements in the area, we trust you will work with his team to remind them of the use agreement parameters," Mr. Stambaugh wrote. "Palm Beach has many lovely estates for sale, and surely he can find one which meets his needs."

Construction has been done on the president's residential quarters at the club, where Mr. Trump is expected to spend the Christmas holiday and which Mr. Stambaugh argued already violates the use agreement.

According to the Washington Post, the town has failed to enforce the covenant over the years. For example, Palm Beach has not imposed restrictions on how many days the President has stayed there–including over Christmas break. Also, the town has allowed the installation of a helipad for Marine One–an addition that would be prohibited by the covenant. And, the club does not seem to be limiting 50% of its members to Palm Beach residents, as the agreement requires.

Go figure. We will see Article II litigation concerning President Trump even after he leaves office.