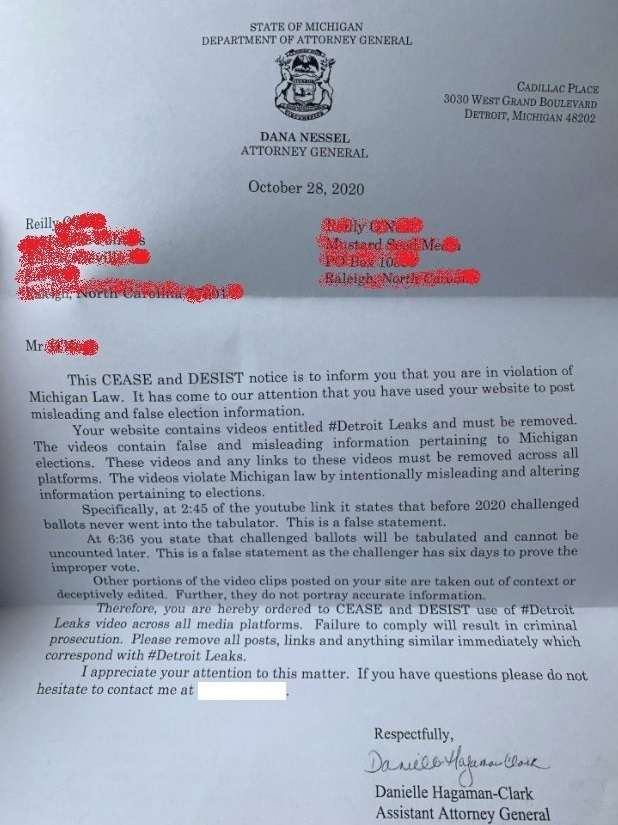 (Jim Hoft (Gateway Pundit) posted about this yesterday, and I've just confirmed the letter's authenticity with the AG's Office of Public Information.)

I can't speak about the factual accuracy of the allegations in the #DetroitLeaks video, or in the AG's response. But assume for the purposes of our discussion that the #DetroitLeaks allegations are false. Can those who post the video indeed be criminally prosecuted for the falsehoods (even if the government could prove knowing or reckless falsehood on the posters' part)?

I don't think so. I think there is some room under the First Amendment, and under the leading precedent (U.S. v. Alvarez (2012)), for laws that ban knowing falsehoods about how, where, and when to vote. There the government's concern would be that people will be duped out of voting because they'll show up at the wrong time or in the wrong place. Such restrictions would be narrow and closely focused at protecting the mechanics of the voting process.

But I take it that this isn't the Michigan AG's concern here—rather, the concern must be that people will be fooled into overestimating the risk of election fraud (assuming those statements are indeed false), and will thus either be less interested in voting or will view the election results as illegitimate. And that strikes me as a special case of the much broader concern about certain kinds of political lies: Lies about the government or its processes, the theory goes, will wrongly undermine citizens' faith in the government.

This is a factually perfectly plausible concern. Indeed, it is an old concern, which dates back at least to the Founding era, and in particular to the debates about the Sedition Act of 1798 and similar speech restrictions—laws that generally banned (to quote the relevant part of the Sedition Act),

false, scandalous and malicious writing or writings against the government of the United States, or either house of the Congress …, or the President …, with intent to defame [them]  … or to bring them … into contempt or disrepute; or to excite against them … the hatred of the good people of the United States.

The Act's backers stressed that the law (unlike the English common law of seditious libel) was limited to "false" and "malicious" statements; and they noted the importance of restricting those statements. Here is Justice Chase's instruction to the jury in U.S. v. Cooper, about the Sedition Act specifically:

If a man attempts to destroy the confidence of the people in their officers, their supreme magistrate, and their legislature, he effectually saps the foundation of the government.

And here is one from Justice Iredell in Case of Fries, dealing with a treason prosecution arising out of the Fries Rebellion in Pennsylvania in 1799:

The liberty of the press is, indeed, valuable—long may it preserve its lustre! … [But] can it be tolerated in any civilized society that any should be permitted with impunity to tell falsehood to the people, with an express intention to deceive them, and lead them into discontent, if not into insurrection, which is so apt to follow? … The necessity [of punishing libels against the government is even greater in a republic than in a monarchy], because in a republic more is dependent on the good opinion of the people for its support …. Take away from a republic the confidence of the people, and the whole fabric crumbles into dust.

The Michigan AG's letter seems to me to be implicitly premised on the same sort of concern.

Again, these concerns are serious concerns, held by serious leaders during the Framing Era. But I think that our legal system has rightly retreated from punishing such seditious libels, partly because criminalizing even outright lies ("false" and "malicious" statements) about the government

For an example of these problems, see U.S. v. Cooper itself; and the Supreme Court recognized this in 1964, concluding that:

Although the Sedition Act was never tested in this Court, the attack upon its validity has carried the day in the court of history. Fines levied in its prosecution were repaid by Act of Congress on the ground that it was unconstitutional…. The invalidity of the Act has also been assumed by Justices of this Court. These views reflect a broad consensus that the Act, because of the restraint it imposed upon criticism of government and public officials, was inconsistent with the First Amendment….

[Though false, malicious allegations against specific public officials may be punished,] "no court of last resort in this country has ever held, or even suggested, that prosecutions for libel on government have any place in the American system of jurisprudence."

Nor does it matter what label government officials attach to this, whether it's "sedition" or "seditious libel" or "misleading and false election information." I'm not sure that Michigan law actually does purport to ban "misleading and false election information" generally. (The AG's letter doesn't cite any such statute, and my quick searches haven't found one.) But if there is such a Michigan prohibition, then I don't think it's constitutional, at least when it comes to allegedly false and public-confidence-damaging claims about the reliability of the election system.