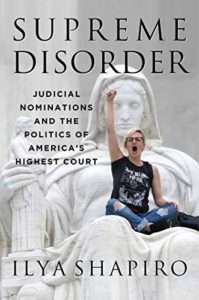 On October 28, 1-2:30 PM EDT (approximate end time), the R Street Institute will host an online event entitled "Between Two Ilyas: Judicial Nominations, Immigration, and Voting with Your Feet." It features not one, but two Ilyas: Ilya Shapiro of the Cato Institute, and myself. We will each be speaking about our respective new books: Free to Move: Foot Voting, Migration and Political Freedom, and Supreme Disorder: Judicial Nominations and the Politics of America's Highest Court. As the event description puts it, "Both works grapple extensively with issues of constitutional structure, and both examine the value of limiting and decentralizing political power. These issues could not be timelier…."

The event is free and open to the public, and you can register to watch here.

To avoid exacerbating the problem of #IlyaConfusion, potential attendees may want to read my definitive guide to how to tell the two Ilyas apart! For further disambiguation, you can watch this 2016 debate in which we crossed swords on the subject of presidential power over immigration.

The #IlyaConfusion problem has, at times, gotten so bad that federal judges and prominent reporters have fallen into the trap. Shapiro's employer (the Cato Institute) once mistakenly attributed some speeches he had given to me, and people have been known to confuse my wife Alison with his wife Kristin, even though the two of them don't actually look all that much alike.