On Tuesday, New York Governor Andrew Cuomo announced sweeping new COVID-19 restrictions (I wrote about them here and here). During the press conference, he made repeated references to the Jewish community. As Cuomo would tell it, he is a Jew's best friend, but is benevolently restricting their rights to promote the greater good. Stop me if you've heard this one before.

This post will not talk about constitutional doctrine. I will not try to pigeonhole his comments into the Lukumi/Masterpiece Cakeshop framework. I am not going to compare infection rates between different zip codes under the South Bay framework. I am not even going to extoll Justice Kavanaugh's dissent from Calvary Chapel, which treats the free exercise of religion as a "most-favored right." (You can read about all of these issues in my new article). Rather, this post will explain how Governor Cuomo demonstrated a hostility to Jews, without even recognizing it. Regrettably, he played on old, deeply rooted, and painful anti-Semitic trope: that Jews spread diseases.

Let's start our history in the mid-Fourteenth Century. Throughout Europe, Jews were scapegoated for spreading the Black Death. Rumors spread that Jews poisoned food, water, and even the air. Stop me if you've heard this one before.

In response to the outbreaks, there were violent attacks against the Jewish. Pogroms spread in France, Spain, Germany, and Swiss, where many Jews were lynched. Other Jews were tortured, and forced to "confess" that they were responsible for the plague. According to one account, a Jew in Geneva confessed to importing poison from Venice, and pouring it into a cistern. In Basel, an entire Jewish community was burned to death. On February 14, half of the Jewish population of Strasbourg was burned alive. The other half were expelled. The pogrom became known as the Strasbourg Massacre. And there were many more such mass killings. The situation became so dire that Pope Clement issued an order to halt the persecution. He observed that the Plague has afflicted the Jews as well.

This antisemitic trope did not end in the middle ages. In the 19th Century, Jewish immigrants were accused of bringing tuberculosis to the United States. "Consumption," as it was called, was also known as the "Jewish Disease." Anti-Semites accused Jews of being frail and sickly, and more susceptible to disease. In 1892, the New York Times ran a front-page story with the headline "We don't need this kind of riff-raff on our shores." The story referred to Russian Jewish immigrants who had arrived on Ellis Island with cholera.

The Third Reich would continue the theme. The Nazis routinely published propaganda that accused Jews of spreading disease. This poster was published in German-occupied Poland in March 1941. The caption reads, "Jews are lice. They cause typhus." The poster was designed to instill fear of Jews among the Poles. 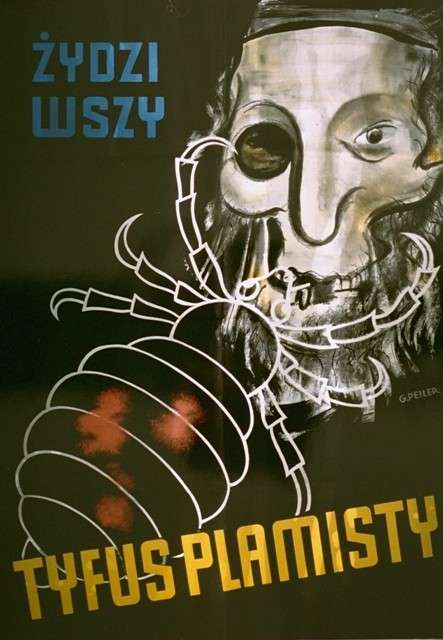 Here is a piece of anti-Semitic propaganda in France from circa 1942. The caption reads, "Tuberculosis, Syphilis, Cancer are curable … It is necessary to finish the biggest curse: The Jew!!" 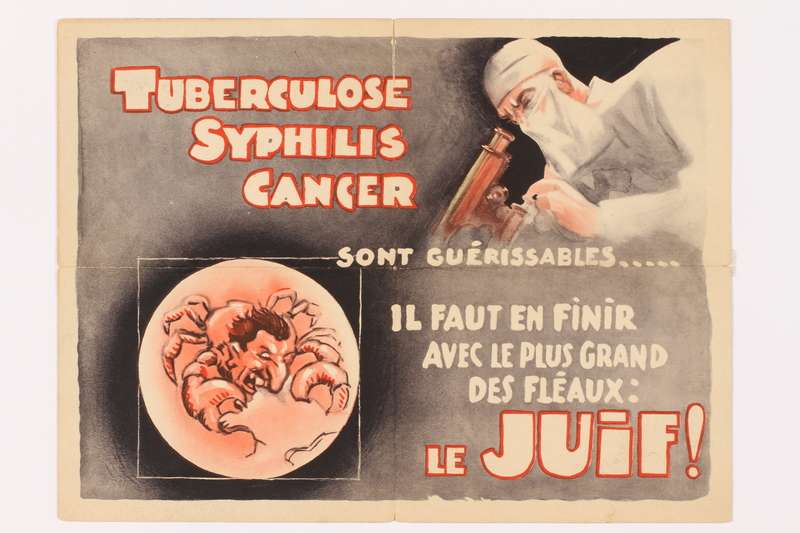 Here is a 1944 piece of German propaganda, that depicts a Jewish parasite, taking over the world. (One eye has the dollar sign, the other eye has the hammer and sickle). 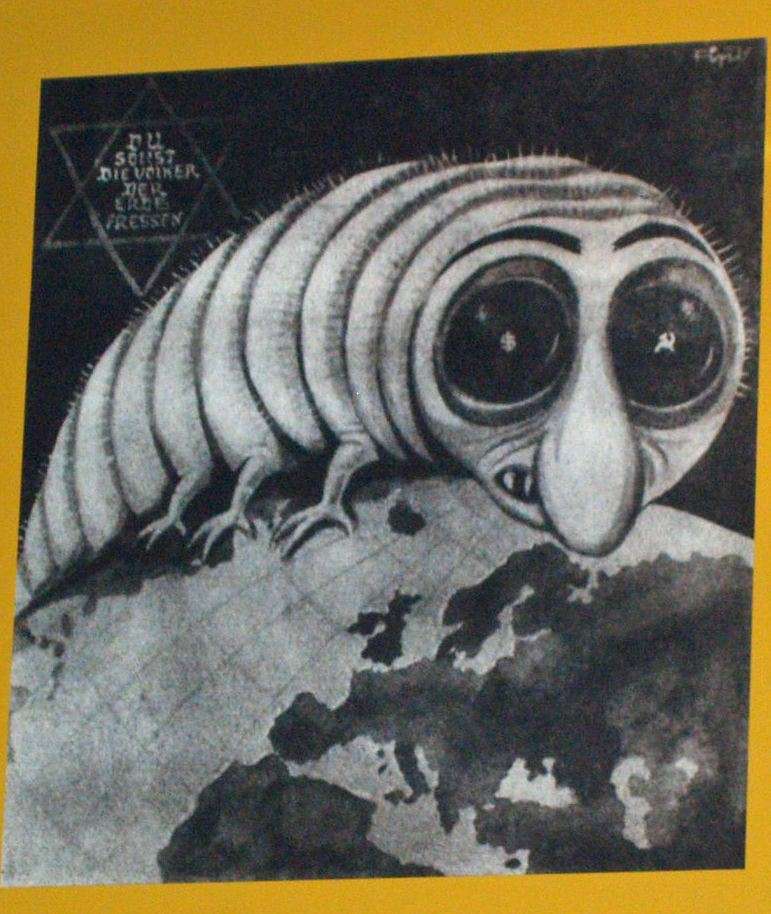 The Nazis also used the specter of Jewish diseases to prevent non-Jews from entering ghettos. They posted quarantine signs that warned people of contagious diseases. This photo was taken outside the Warsaw Ghetto in February 1941. The sign reads, "Epidemic Quarantine Area: Only Through Traffic is Permitted." 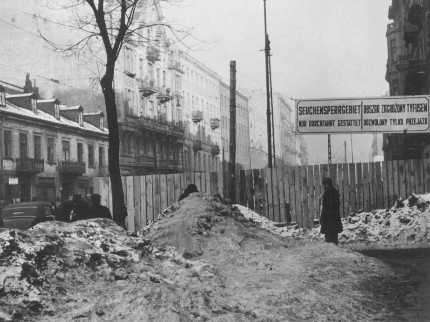 Here is another photo from 1940. The sign reads "Quarantined area. Only through traffic is permitted." 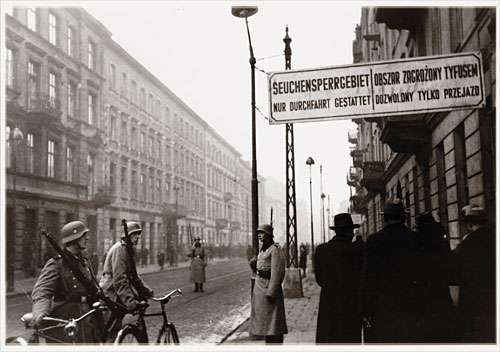 Governor Cuomo has not proposed posting signs around Borough Park–yet. In my last post, I used the phrase "red-lining" very deliberately. Drawing borders around Jewish communities harkens back to a very evil practice during the Third Reich, and much earlier. Indeed, look at this map of Rockland County, New York. 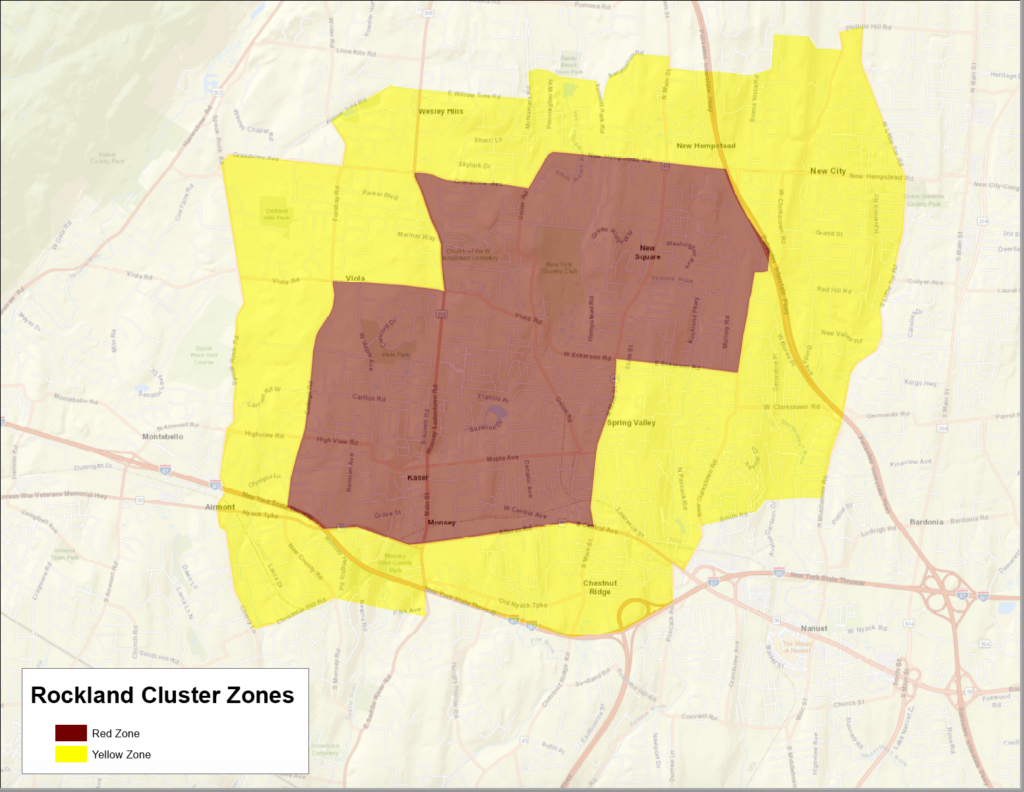 There is only a red zone, and a yellow zone. No "buffer" orange zone between the red and yellow. Cuomo must think that Jews will only stay in their red ghetto, and not dare travel across the street to Costco. And that non-Jews would not dare venture into the red zone to get a knish. Maybe warning signs would help.

And so on. And don't think for a second this form of anti-semitism is a thing of the past.

In 2019, there was a Measles outbreak in New York City. And, once again, Jews were blamed for the spike. And that blame was followed by antisemitism. Emma Green observed in the Atlantic, that "pedestrians cross[ed] the street to get away from visibly Jewish people, bus drivers barr[ed] Jews from boarding, and people toss[ed] out slurs such as "dirty Jew." She added:

Rivkie Feiner, a community volunteer in Monsey, a town in Rockland County, told me she's heard numerous stories of people yelling about measles or making derogatory comments when they see Jews. A man walked by her son in Costco and said, "I guess if I get the measles, I'm getting it here." One local rabbi told her that during a visit to Rite Aid with his family, a group of teenagers screamed at them from the parking lot, "Hitler should have killed you all with the measles." Feiner has lived in Monsey for basically all her life, she said, and in the past few years, "there have been more anti-Semitic incidents than in [her] entire life combined."

I bet you never heard of these incidents.

The reckless decision to hold this press conference, in which Jews were repeatedly targeted, was unconscionable. Governor Cuomo showed such a painful lack of awareness of the history of Jewish oppression. After September 11, 2001, President George W. Bush went to a mosque to demonstrate that the war on terror was not a war on Islam. Governor Cuomo could have recognized that there is a concern in the Jewish community, but go out of his way to not target the Jews. He failed. Miserably.

This incident reflects poorly on our current climate. Today, even the slightest microaggression against certain minority groups is grounds for cancellation. But macroaggressions against Jews are routinely tolerated. Fine distinctions are carved between anti-semitism and anti-zionism. And the Governor has the chutzpah to tell everyone that he is friends with Jews–as if that makes his actions okay. I have plenty of Jewish friends. Stop me if you've heard this one before.

Indeed, Cuomo played on yet another trope: that Jews are controlled by their rabbis. This cabalistic (cf. Kabbalistic) vision of Judaism plays into the the image of the Elders of Zion–that there are several powerful Jews sitting around a table, pulling the strings. If only Cuomo talks to the right Rabbis, everything will be fine. The peons will fall into line. If only. During his conference call, Cuomo only took pre-screened questions with community leaders. His support is a Potemkin Village, which may soon be subject to quarantine.

Governor Cuomo should have gone out of his way to avoid placing the blame on Jewish people. Even if the Jewish communities were at higher risk–a factual dispute–every reasonable step should have been taken to address that situation in a responsible fashion. Instead he fanned the perpetual flame of the "dirty Jew" stereotype. He flashed on his powerpoint photographs of Jewish men in black hats assembling in mass. No matter that one of the photos was more than a decade old. No doubt someone in his office searched for some Jewish clipart and found something useful. Why did Cuomo need to show any graphics? A sterile presentation with maps would have sufficed. What was he trying to achieve by referencing Jews, over and over again, if not to cast blame. And in the process, he shut down all Jewish schools. And by imposing a hard 10-person cap, he made it impossible for the overwhelming majority of Jewish people to pray together. Prayer takes time, and can only be performed at certain times. Even running services around the clock would only allow a small percentage of the congregation to assemble. These remarks were met, alas, with crickets.

That Cuomo's hostility has gone unnoticed in our culture of microaggressions and anti-racism is a shanda–err shame.

Why Are Half of All U.S. Exonerations of Black Prisoners?

It's a Mistake To Turn Away Russian Civilians Fleeing Conscription