I again dissent from the Court's denial of a motion to stay a preliminary injunction altering state election laws on the eve of an election.FN1

Huh? I can't recall any judicial opinion in which a judge corrects a press report about her decision. (Please email me if you are aware of any). Why would a judge publicly criticize a reporter? Who cares if the reporter got it wrong. I do know that some judges contact reporters, off the record, to talk about press coverage. Sometimes they contact me to complain. But Judge Callahan's public rebuke was a new one for me.

Nathan Brown wrote the cited article for the Post Register, an Idaho newspaper. He wrote:

Advocates for a ballot initiative to boost education funding in Idaho by raising income taxes on corporations and the rich plan to start gathering signatures again early next week.

On Wednesday, three judges for the federal Ninth Circuit Court of Appeals denied the state of Idaho's motion for an emergency stay that would have prevented Reclaim Idaho from starting to gather signatures online.

To his credit, Brown actually included a link to the PDF of the opinion. Bless him. More reporters need to include links to primary sources.

If you click that link, you will find a two-page PDF. That document includes a per curiam order that does not reference a dissent. Based on the documents he had, he reported that the panel was unanimous. 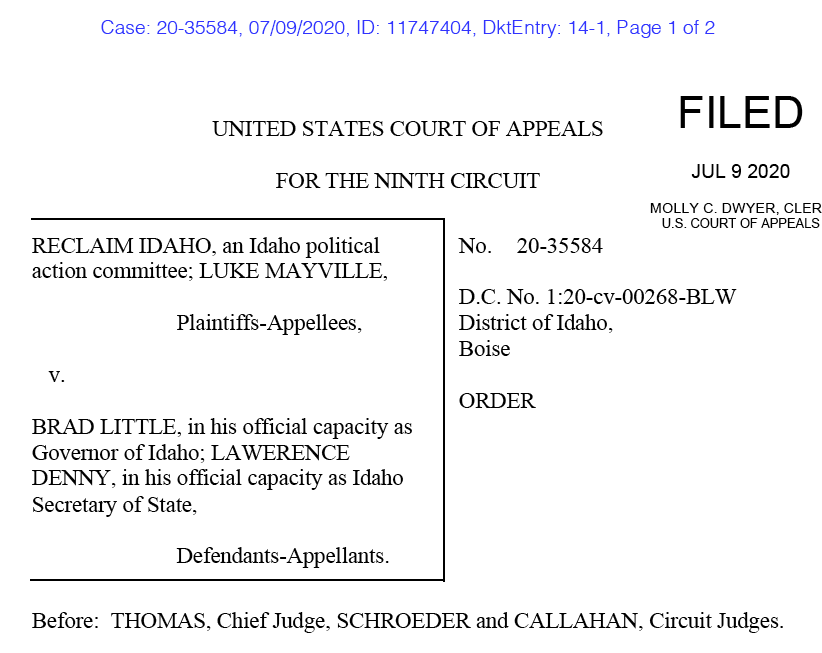 As PACER experts may know, if there is a DktEntry 14-1, there is almost certainly a DktEntry 14-2. PACER allows a document to have multiple entries; for example, separate exhibits. In this case, the Ninth Circuit placed the majority opinion at 14-1, and Judge Callahan's dissent was at DktEntry 14-2.

Brown obtained part of the docket entry, and reported accurately based on what he had. Maybe he downloaded it from PACER and paid the fee charged by the federal courts. Or maybe someone sent him part of the PDF. I think it is unreasonable to expect reporters to know the fine nuances of PACER. And it is unfair to criticize Brown by name for failing to know those details. Indeed, I'm sure this reporter will have to talk to his editor about this public castigation from a federal appellate judge. I hope he is not disciplined for this good faith mistake.

Judge Callahan should have held back her criticism here. She should apologize to Brown–and send a nice note to Brown's editor.

Netflix CEO Apologizes for Having Principles

Why Biden's $3.5 Trillion Spending Plan Would Be Worse for the Economy Than Manchin's $1.5 Trillion Proposal

San Francisco Wants To Sell the Air Rights Above City Hall for $45 Million. Why Not Give Them Away for Free?