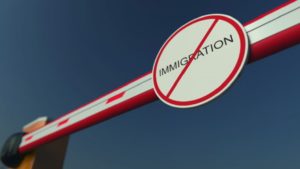 The Atlantic has just published my new article on Trump's coronavirus immigration restrictions, which have made America more closed to immigrants than at any previous time in history. Here is an excerpt from the beginning:

On Monday, President Donald Trump extended a near-total ban that he had first announced in April on entry into the United States by immigrants seeking "green cards" for permanent residency. This policy is the most sweeping ban on immigration in American history. Even during earlier crises, such as the Great Depression, the two world wars, and the horrific flu pandemic of 1918–19, the U.S. did not categorically ban the entry of virtually all migrants seeking to settle here permanently. The newly expanded version of the policy also severely restricts temporary work visas.

The official justifications for these policies are the prevention of the spread of the coronavirus pandemic and the protection of American workers from wage competition. Neither rationale can justify such a sweeping restriction on immigration. Even more troubling, the order is a large-scale executive-branch power grab that sets a dangerous precedent. It makes a mockery of conservative jurists' insistence that there are constitutional limits to the amount of authority Congress can delegate to the executive.