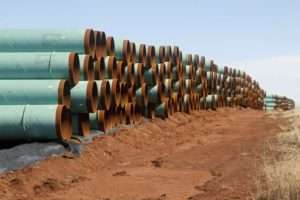 On Thursday, the New York Court of Appeals (which is that state's highest court) issued a decision in National Fuel Gas Supply Corp. v. Schueckler, upholding the use of eminent domain to seize private property for a pipeline that might never get built. Robert Thomas, a prominent takings lawyer, has a helpful summary at the Inverse Condemnation blog:

A private pipeline company obtained a certificate of public convenience from [the Federal Energy Regulatory Commission]. Under the Natural Gas Act, FERC may issue such certificates conditioned on the applicant meeting the Clean Water Act's requirement of obtaining state environmental check off on the project. The pipeline needed an easement across Schuecker's land, and began the condemnation process under New York law. It attached to its condemnation petition the conditional FERC certificate.

Schuecker objected, asserting that the FERC certificate was no good, because the pipeline had not met the condition: it had not certified to FERC that it had received all state approvals (as required by the federal Natural Gas Act). Indeed, the New York Department of Environmental Conservation had denied the pipeline's water quality certification. The pipeline responded that it was seeking reconsideration with FERC, and that the NYDEC could not deny water quality certification because it was too late to do so. The trial court agreed with the pipeline, but the appellate department reversed…

In National Fuel Gas Supply Corp. v. Schueckler, No. 29 (June 25, 2020), the court's majority agreed with the pipeline, and concluded that the FERC certificate was good enough, and the pipeline fulfilled the requirements of New York's eminent domain statute. That statute exempts a condemnor from making findings about public use and environmental impact of the taking if it obtains a certificate of public convenience from a federal or state agency considering "factors similar" to these.…

Yeah, the FERC certificate was conditional, but it really wasn't "conditional" in a way that would interfere with the processing of an eminent domain case. See slip op. at 13. The pipeline can't actually build anything, but it can take property.

The majority recognizes that both the federal and state constitutions mandate that eminent domain can only be used to take property for a "public use," which both the New York Court of Appeals and the federal Supreme Court define broadly to cover almost any project that benefits the public. But the Court of Appeals concluded that the pipeline satisfies this standard, despite the fact that it might never actually get built:

To be sure, the Appellate Division's concern that the power of eminent domain should be exercised only for viable projects is legitimate; both our state and federal constitutions permit the taking of property by eminent domain only for public use (see NY Constitution art I, § 7; US Constitution, Fifth Amendment)… and any exercise of eminent domain involves a careful balancing of the interests of property owners, the community, and the public use to be served (see EDPL 101). However, in enacting the statutory exemption set forth in EDPL 206 (A), the legislature recognized that eminent domain is, at its core, intended to advance public works and that, in connection with such public projects, government agencies may often render determinations of public use that typically need not be replicated. Where, as here, a state or federal agency has determined that a project serves a public use, duplicative and exacting review of that determination would contravene the statutory framework prioritizing efficient resolution of condemnation claims for the greater public good….

In my work on public use issues, I have criticized the broad definition of "public use" adopted by New York courts and by the federal Supreme Court, arguing for a narrower one. But this goes beyond allowing a broad definition of public use, under which a very wide range of private projects qualify. It even goes beyond the ruling the federal Supreme Court made in the controversial case of Kelo v. City of New London, where the majority concluded that the government need not prove that the project they envision will actually produce the public benefits that supposedly justified it in the first place.

Here, there is real doubt whether the project in question - the pipeline - will ever actually get built at all. If courts are going to allow a very broad definition of what qualifies as a "public use" and defer to the government on its supposed benefits, the least they can do is ensure that the government can prove that the project will at least get built. If it isn't, then there cannot be any public use, even under a very broad definition.

In concluding that the Corporation may rely on a Federal Energy Regulatory Commission certificate to satisfy its burden under the EDPL, even though the certificate expressly conditions the project on completion of additional federal and state mandatory assessments with the potential to stop the project, the majority measures the certificate by its title, the equivalent of "judging a book by its cover." Metaphorically, and as a matter of law, no good can come from this. Indeed, the majority misinterprets the federal regulatory process and the EDPL condemnation framework, and in so doing sanctions the condemnation of private property for development projects that may never gain final approval. I do not see how the public benefits from the premature taking of private land, and therefore I dissent….

The Corporation concedes, and FERC anticipates, that the project's details may go through further revision in order to accommodate and address pre-construction problems. It may be that after taking title, and clear-cutting the Scheuckler property, the Corporation modifies its plans, perhaps rendering use of the disputed land unnecessary or requiring an easement to another swath in a different location. Given this uncertainty, and the potential for project redesign that affects the public use justification for taking a designated area of land in the first place, it is nonsensical and unfair to take the Scheuckler property before completing the necessary state permit process and ensuring that the project will likely move ahead in a form approved by New York.

In a later part of her dissent, Judge Rivera urges the state legislature to correct the problem created by this decision, and analogizes it to Kelo, which generated a massive wave of state eminent domain reform laws. New York was one of only five states that did not enact any reforms in response to that ruling.

Kelo is also similar to the current case in another way: the "economic development" project for which private homes were condemned in Kelo was a dubious proposition from the beginning, and ultimately fell through. To this day (fifteen years after the Supreme Court ruling), nothing has been built on the condemned property and the only regular users of the land are feral cats. If the pipeline project suffers a similar fate, New York might end up creating another expensive feral cat reservation.

The majority suggests that it makes sense to construe state law to allow takings for an uncertain project, because if the pipeline project is "abandoned,"  Theresa Schueckler will have the right to repurchase the property. Judge Rivera has a strong response to this point, too:

The majority argues that because section 406 grants an owner the right to repurchase property should the project be abandoned, we must read the EDPL as allowing involuntary title transfers for projects that may eventually fail. That position misses the mark. First, it is unclear that failure to acquire the necessary approvals constitutes "abandonment" of a project for purposes of the EDPL. For example, the project could be redesigned and go forward without the need to condemn the owner's property. Second, the property buy-back allowed by section 406 applies only if condemnation was properly exercised, meaning 406 provides a limited remedy to an owner where the public use initially justified acquisition of the property, but the condemnor subsequently deserts the project. Here, the Corporation failed to satisfy the requirements of EDPL article two: the Corporation did not hold hearings and make findings in accordance with section 204, nor does the FERC certificate comply with section 206. The limited remedy of section 406 is simply irrelevant on these facts. Third, the remedy has limited impact and works best for those who are able financially to buy back their land and interested in doing so no matter the changes to the landscape, years after having title taken away. For example, if the Corporation "abandons" the project after gaining title, clear cutting the land and commencing construction… there is no certainty that respondent Theresa Schueckler—now widowed—would have the funds to repurchase that property, even if she wanted it in its changed condition.

Despite Judge Rivera's plea, I am not optimistic that the New York state legislature will fix this issue.  As Robert Thomas notes, New York eminent domain law is among the most hostile to property owners in the entire country. However, in recent years, abusive pipeline takings have triggered a political backlash that cuts across ideological and partisan lines. Perhaps New York will feel its effects, as well.

Judge Rivera cites a good deal of academic literature on Kelo and its aftermath, including an article I wrote back in 2007. Sadly, she did not cite my book about the case, in which I assessed it much more thoroughly.  This is the second time this month that a court has cited my writings on Kelo, following a major property rights decision by the Supreme Court of Israel. This is not a testament to my work, but rather to the significance of the Kelo case itself, which continues to resonate fifteen years after it was decided.

NOTE: The Court of Appeals is in fact New York's highest court, despite the seemingly anomalous name, and despite the fact that its judges have the title of "Judge" rather than "justice." In New York, the "supreme court" is actually a trial court.