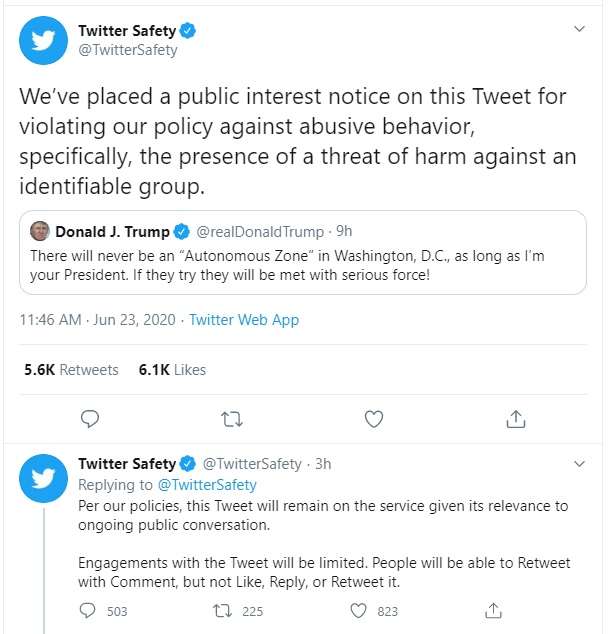 But of course governments normally threaten serious force against people who try to set up zones "autonomous" from the government (for instance, excluding police, or barricading streets, or otherwise enforcing rules that they themselves made up; we're not speaking just of lawful, peaceful protests here). Indeed, governments implicitly and often explicitly threaten serious force as a backstop for most laws.

Say some political activists decided to go onto the Twitter headquarters parking lot and set up an autonomous zone complete with barricades and exclusion of police and security guards, as a means of trying to change Twitter policy. I assume Twitter would ask to have them ejected. Such ejection, to be effective, has to rely on serious force.

Or say anti-abortion activists set up an autonomous zone in front of an abortion clinic, barricading streets to block access to the clinic and trying to stop police officers from entering to protect the women going to the clinic. The activists would and should be stopped through serious force (as much as is necessary to get them out of there). Indeed, if business owners decide to simply not comply with various taxes, regulations, and the like, the regulatory state will ultimately stop them using the threat of serious force.

Now of course such force usually soundly starts small (e.g., citations before arrests), and escalates only as necessary. That's usually better for everyone (the citizenry that expects protection from illegal conduct, the people engaging in the illegal conduct, the police, and other government officials).

Whether the government should or shouldn't remove the "autonomous zone" organizers or let them stay until they get tired or worried about being shot or attacked by fellow autonomous zone denizens is an interesting practical question. (My view is that they should be removed, but that decision is not mine to make.) But surely the threat of serious force to enforce the law is at least a plausible, indeed commonplace, alternative.

Indeed, it isn't just the police that can use serious force. I expect Twitter likely has its own security guards who can themselves use serious force against people who set up an autonomous zone on Twitter property. (Those guards can at some point escalate the serious force up to deadly force, though of course not always.) On the public streets, though, the way we deal with people trying to impose their own rules is by threatening serious force by law enforcement.

Now I realize that it's pretty unusual for the government to send the message, "If you violate the rules, you'll be met with serious force." For many violations of the rules, the message goes without saying. In other situations, an influx of armed public servants is usually seen as speaking louder than words. But I see little sound basis for a social media platform to block people from retweeting or liking an elected official's making explicit what is inevitably implicit.

The Provincetown Outbreak Shows Vaccinated People Can Be Infected by the Coronavirus, but the CDC's Director Grossly Exaggerates That Risk