A week ago, I suggested that mask mandates might be part of a reasoned COVID-19 response, but that some form of random experimentation would be helpful. Since then, the prospect of increasing mask usage has become all the rage. The White House is planning to recommend that Americans wear cloth masks (not surgical masks, which may be better but are needed for health care workers). Japan, meanwhile, is planning to offer two cloth masks per family in Japan, leading to complaints that this is a poor substitute for a state of emergency and to amusing cartoons about how large families would share two masks (not actually such a crazy proposition, if almost everyone stays at home and if laundry is done daily).

Meanwhile, a paper by Abaluck et al. estimates that "the benefits of each additional cloth mask worn by the public are conservatively in the$3,000-$6,000 range due to their impact in slowing the spread of the virus." The paper includes the following chart: 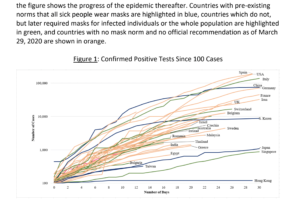 This is reasonably persuasive, but it's difficult to be sure with such a small sample of countries and the possibility that there are unobserved variables that correlate with mask-making, such as cultural tightness.

Yesterday, I elaborated the case that we should be doing more randomized experimentation on legal responses to the pandemic. As an illustrative example, I suggested that we might at an appropriate time randomize which construction sites are allowed to open for work again, allowing for rigorous assessment of whether closing such sites reduces transmission. The prospect of mask mandates is in many ways a better example, though it may be more challenging.

It's a better example for two reasons. First, if Abaluck et al. are in the ballpark, increased use of masks might be an important component of a solution to the current crisis. Of course, one might say on the basis of this that we should just increase the use of cloth masks now. But it seems that the Washington plan is just to encourage use, and stronger evidence could help determine how strong the policy response should be. Social norms also might change faster when the evidence becomes clearer. Depending on how strong the benefits are (if they exist at all, and the policy does not backfire), that might also determine how much the government should subsidize masks.

Second, randomization has generally been considered permissible when some scarcity prevents everyone from obtaining some benefit. A great example of how scarcity can produce useful information came in a paper from last year, showing that people who received a letter (which the government did not allocate enough money to send everyone) about getting health insurance had lower mortality than those who did not. Cloth masks are scarce. Sure, you can create them with DIY designs. But some people will find even simple masks difficult to put together, and the masks without elastic (itself scarce these days, as my sewing daughter recently found out) may not be so easy to tie behind one's head. Presumably the scarcity explains why Japan can only afford two per family, and it might be surprising if the United States had available anywhere near that number. Even if the government mandates that everyone wears masks and somehow successfully enforces that, people may be more likely to switch masks rather than wearing the same dirty one over if you give them masks.

If a government, such as Japan's, is going to distribute a limited number of masks, it should do so in a way that allows it to draw the most information possible from the experiment. A challenge in assessing mask policy is that much of the benefit is the positive externality (which of course also strengthens the case that a mask mandate is a legitimate governmental intrusion on personal liberty), so it's not enough for Japan to do a survey of people who randomly receive masks. Anyway, it might be difficult to track everyone's health status. An alternative is to randomly choose geographic regions that will receive the initial shipments of masks, large enough so that there is relatively little spillover (people wearing masks from one area to another) but small enough so that enough regions exist that differences among randomly selected regions are less likely to be attributable to chance. If masks make a positive difference, one should expect to begin observing fewer cases in areas receiving masks around a week after distribution, certainly within a couple of weeks.