Back in October 2018, Rep. Kevin McCarthy tweeted the following: 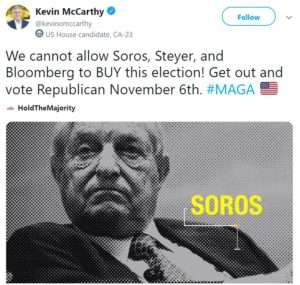 I think accusations of "buying" elections tend to range from silly to demagogic, but it seems fairly obvious why McCarthy picked these three guys: They were 3 of the top 5 Democratic donors that cycle, and the most well-known (or notorious in Republican circles). Various critics, however, accused McCarthy of antisemitism for picking on three Jews. Steyer himself called the tweet a "straight up antisemitic move." Two problems: (1) Steyer, though he has a Jewish father, identifies as a Christian, and I doubt 1 in 100 people seeing that tweet knew he was of partial Jewish descent; and (2) Almost all of the Democrats' top donors are Jews, so if you say that criticizing donors who are Jewish is antisemitic, than you can't criticize the top Democratic donors. Nevertheless, even now, over two years later, I see this tweet cited as "obviously" antisemitic. 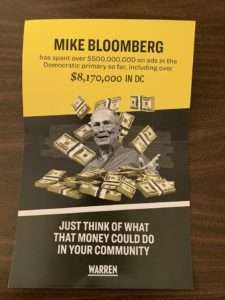 Near as I can tell, none of the critics of McCarthy's tweet have expressed the slightest outrage at the Warren flyer. In fact, I challenged a couple of longstanding McCarthy critics on Twitter to explain why the McCarthy tweet was antisemitic, but the Warren flyer is not. I was met with silence, including from a couple of folks I interact with frequently. (By the way, my Twitter handle is @ProfDBernstein.)

This strikes me as an obvious double-standard, so I started thinking about the source of it. My tentative conclusion is that people, especially liberals in the media and in Jewish organizational circles, believe there is a large reservoir of antisemitism among conservatives that doesn't exist on the left. So if a Republican, for example, seems to associate Jews with money and buying elections, that's likely an appeal to latent or blatant antisemitism. But if someone like Warren seems to do something similar, that's not antisemitic because, after all, who would she be appealing to?

The problem is that this is based on a false premise. Antisemitism certainly exists within Republican and conservative circles (especially on the far right) but it also exists in Democratic and liberal circles. Indeed, the most antisemitic demographic groups in the U.S.--Latinos (especially the foreign-born), African Americans, and Muslims, all vote strongly Democrat. So there is no a priori reason to interpret a Democrat's ads or slogans charitably, but not a Republican's.

Please note: I don't believe that either McCarthy's tweet nor Warren's flyer had antisemitic intent, and indeed I doubt that in either case the Jewishness of the subjects entered into the relevant actors' minds at all.