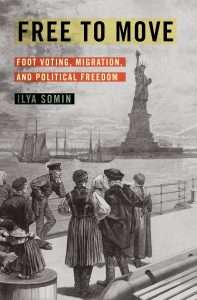 My new book Free to Move: Foot Voting, Migration, and Political Freedom will be published by Oxford University Press in April. It is now available for preorder on Amazon (where if you order now, you can get the benefit of any price reductions Amazon does between now and the release date),  at the Oxford UP website, and elsewhere.  If you contact me, I can send you a code that will entitle you to a 30% discount at Oxford UP site. A Kindle/e-book version should be available for preorder within the next 2-3 months.

Here is the publisher's summary:

Ballot box voting is often considered the essence of political freedom. But it has two major shortcomings: individual voters have little chance of making a difference, and they also face strong incentives to remain ignorant about the issues at stake. "Voting with your feet," however, avoids both of these pitfalls and offers a wider range of choices. In Free to Move, Ilya Somin explains how broadening opportunities for foot voting can greatly enhance political liberty for millions of people around the world.

People can vote with their feet through international migration, by choosing where to live within a federal system, and by making decisions in the private sector. These three types of foot voting are rarely considered together, but Somin explains how they have major common virtues and can be mutually reinforcing. He contends that all forms of foot voting should be expanded and shows how both domestic constitutions and international law can be structured to increase opportunities for foot voting while mitigating possible downsides.

Somin addresses a variety of common objections to expanded migration rights, including claims that the "self-determination" of natives requires giving them the power to exclude migrants, and arguments that migration is likely to have harmful side effects, such as undermining political institutions, overburdening the welfare state, increasing crime and terrorism, and spreading undesirable cultural values. While these objections are usually directed at international migration, Somin shows how a consistent commitment to such theories would also justify severe restrictions on domestic freedom of movement. That implication is an additional reason to be skeptical of these rationales for exclusion. By making a systematic case for a more open world, Free to Move challenges conventional wisdom on both the left and the right.

And here are some early endorsements:

"In this excellent book, Somin makes a compelling case that migration –or foot voting—provides far more political power than voting. Any one voter has a trivially small chance of altering an election, but any household can choose a new state and local government by simply moving.This insight implies that devolving power to local governments will generate far more political voice than any conceivable reform to national elections. Freer international migration would empower even more people to choose their own government. Somin's case is strong, his thinking is clear, and his writing is eloquent."—Edward Glaeser, Fred and Eleanor Glimp Professor of Economics, Harvard University, and author of The Triumph of the City

"Ilya Somin shows that mobility-the freedom to move from here to there-might be the most underrated underpinning of a free society. It is especially important in America, where states can compete with one another to have social policies welcoming to enterprise and liberty.Voting is important; so is what Somin calls 'foot voting.'"– George F. Will, columnist, Washington Post, and author of The Conservative Sensibility

"This eminently readable, tightly-argued, and compelling book is a model for how empirically-informed democratic theory ought to proceed. Somin shows us that in modern democracies, even when everyone has equal voice, that voice is usually close to worthless. Taking political freedom seriously requires a serious solution: foot voting. We need to ensure everyone has the right and power to move and work where they please. Exit beats voice almost every time, and the competition isn't even close. Somin deftly considers and rebuts every major objection to his view. In the end, the conclusion is inescapable: the arguments for democracy don't so much justify participatory democracy; they instead justify real freedom of movement."– Jason Brennan, Robert J. and Elizabeth Flanagan Family Term Professor of Strategy, Economics, Ethics, and Public Policy, McDonough School of Business, Georgetown University; author of The Ethics of Voting

"Ilya Somin has done it again, producing a compelling new book, rich with insights about democratic theory, law, and economics. Free to Move takes a familiar idea-that people should be allowed and encouraged to choose the entities that govern them by moving between jurisdictions-and shows why it is valuable and how taking it seriously as a form of political choice provides a clear set of answers to some of our most pressing social problems. Those who share Somin's belief in the value of 'voting with your feet,' will see the scope of their commitment pushed by his consistency and range, and those who do not will find themselves challenged and perhaps even convinced."– David Schleicher, Professor, Yale Law School

"Many find majority voting with ballots to be the highest guarantor of liberty. They may never have found themselves in the minority on a question vital to their well-being. Ilya Somin brilliantly and accessibly points to the central, additional role of voting with your feet—moving to a place with better policy—in protecting liberty. His book mines a deep vein of law and philosophy, but you'll find mercifully little jargon here. What you will find is a book that gives to common assumptions a taut and compelling challenge, and might leave you transformed. It offers a new way to think about international migration, but not just that. It is nothing less than a proposal for a higher form of democracy, built on the critical roles of both ballot-voting and foot-voting as guardians of freedom."— Michael Clemens, Center for Global Development, author of The Walls of Nations

On Twitter, Robert Guest, foreign editor of The Economist, says "It's first rate" (he read a pre-publication version of the manuscript).

For universities and other organizations that might be interested, I am available for speaking engagements related to the book. If you are an academic or teacher and assign the book to your class, I will speak to your class remotely by Skype, for free, if you are interested.

By now you are probably thinking that this post is shameless self-promotion by a book author. I plead guilty to that charge! But, for what it is worth, I also intend to donate 50% of all royalties generated by Free to Move to charities benefiting refugees.

I will write more about the book closer to the publication date.

UPDATE: I have added the endorsement by economist Michael Clemens —one of the world's leading experts on international migration—which just came in today.

The Self-Fulfilling Prophecy of 'School Hesitancy'

He Was Executed for Murder. New DNA Evidence Implicates Someone Else.