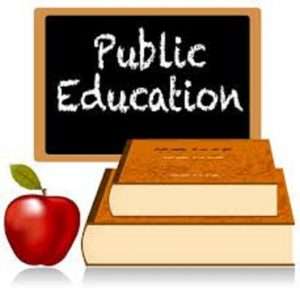 Dana Goldstein of the New York Times has an interesting article describing how state governments in both liberal California and conservative Texas work to skew school textbooks in favor of their preferred ideologies. Despite their differences, both seek to indoctrinate students rather than present facts in any sort of evenhanded way:

The textbooks cover the same sweeping story, from the brutality of slavery to the struggle for civil rights. The self-evident truths of the founding documents to the waves of immigration that reshaped the nation.

The books have the same publisher. They credit the same authors. But they are customized for students in different states, and their contents sometimes diverge in ways that reflect the nation's deepest partisan divides.

Hundreds of differences — some subtle, others extensive — emerged in a New York Times analysis of eight commonly used American history textbooks in California and Texas, two of the nation's largest markets.

In a country that cannot come to a consensus on fundamental questions — how restricted capitalism should be, whether immigrants are a burden or a boon, to what extent the legacy of slavery continues to shape American life — textbook publishers are caught in the middle. On these questions and others, classroom materials are not only shaded by politics, but are also helping to shape a generation of future voters….

Requests from textbook review panels, submitted in painstaking detail to publishers, show the sometimes granular ways that ideology can influence the writing of history.

A California panel asked the publisher McGraw-Hill to avoid the use of the word "massacre" when describing 19th-century Native American attacks on white people. A Texas panel asked Pearson to point out the number of clergy who signed the Declaration of Independence, and to state that the nation's founders were inspired by the Protestant Great Awakening….

Texas policymakers feel strongly about giving students a positive view of the American economy; since 1995, state law has required that high school economics courses offer an "emphasis on the free enterprise system and its benefits." That emphasis seems to have made its way into the history curriculum as well.

California's curriculum materials, by contrast, sometimes read like a brief from a Bernie Sanders rally. "The yawning gap between the haves and have-nots and what is to be done about it is one of the great questions of this time," says the state's 2016 social studies framework.

As a result, California textbooks are more likely to celebrate unionism, critique the concentration of wealth and focus on how industry pollutes the environment.

As the article notes, California and Texas are far from unique. Other state governments make similar efforts to use school curricula to promote their ideologies.

These findings should not surprise anyone familiar with the history of public education. From the very beginning, one of its main purposes was indoctrination in the dominant ideology of the day. In nineteenth-century Europe, the goal was often to indoctrinate the population in nationalism. In the US, it was to indoctrinate European immigrants—many of whom were Catholic or Jewish—in what were seen as genuine American values, which at the time incorporated much of the then-dominant versions of Protestantism.

Today, the goals of public-school indoctrination have shifted somewhat. But the fact of it persists.

This state of affairs throws cold water on the popular notion that we can use public education to solve the problem of widespread political ignorance. In principle, we might be able to increase voter knowledge of government and public policy by improving the school curriculum and requiring a high level of knowledge as a prerequisite to graduation. But, in practice, state education officials are usually more interested in inculcating students with their own preferred ideologies than in presenting facts objective or increasing political knowledge across the board. They especially aren't interested in combating the partisan and ideological bias that infects many voters' judgement of political issues, especially in our highly polarized era. To the contrary, they often seek to exacerbate that bias by promoting the agenda of Team Red or Team Blue (depending on who controls the state government in question).

Of course, school officials might take a different approach if voters closely monitored school curricula and refused to reelect politicians who use public school curricula for purposes of indoctrination. But if voters were that knowledgeable and that free of bias, we would not have a problem of political ignorance in the first place!

The prevalence of efforts at indoctrination is likely one of the reasons why levels of political knowledge have been largely stagnant (and low) over the last sixty years, even though the average adult American today has several years more education than was the case in 1960.

Some reformers propose to fix the problem by having one centralized set of education standards for the entire nation. Then, California would no longer be free to promote left-wing indoctrination in its schools, and Texas would no longer be able to inflict the conservative version on its students. But centralization could easily make things worse rather than better. In the status quo, liberal bias in blue state schools is to some degree balanced by conservative bias in red states, and vice versa. With a single centralized national curriculum, any bias it includes would have a nationwide impact on public-school students around the country, and there would be no counterweight to it, except perhaps among the relatively small minority of students (about 10%) who attend private schools.

One oft-overlooked argument for school choice is that it would make systematic indoctrination of schoolchildren more difficult. The danger of uniform nation-wide indoctrination is the main reason why John Stuart Mill opposed state control of schools, even though he favored government subsidization of education for those unable to afford it. He warned that "[a] general State education is a mere contrivance for moulding people to be exactly like one another: and as the mould in which it casts them is that which pleases the predominant power in the government, whether this be a monarch, a priesthood, an aristocracy, or the majority of the existing generation, in proportion as it is efficient and successful, it establishes a despotism over the mind, leading by natural tendency to one over the body." Mill may have overestimated the degree to which such indoctrination is effective, but he was right to fear that it would happen, and right to worry that it is inimical to genuine efforts to increase public knowledge.

While many private schools no doubt have ideological biases of their own, a voucher system with competing private schools would make it harder to impose one dominant ideology on all or most students simultaneously. Privatization would make it far more difficult to impose a single orthodoxy throughout the nation, or throught all the schools in one state.

Moreover, some private schools try to make a genuine effort to present a range of different views on political issues, and others might promote views that do not align neatly with the current left-right political spectrum. That would increase the overall  ideological diversity  of the education system, even if many individual schools were not ideologically diverse internally. It would be a nice example of Heather Gerken's notion of "second-order diversity," under which homogeneity in individual institutions can help increase the overall diversity of the system, and widen the range of options available to people "voting with their feet."

The prevalence of indoctrination is just one of several reasons why using public education to overcome political ignorance is far more difficult than many people think. I discuss both this problem and other obstacles in greater detail in Chapter 7 of my book Democracy and Political Ignorance.