Sinologist (and Penn professor) Victor Mair (Language Log) has more on one of the less discussed features of the now-famous Tweet from Houston Rockets general manager Daryl Morey: 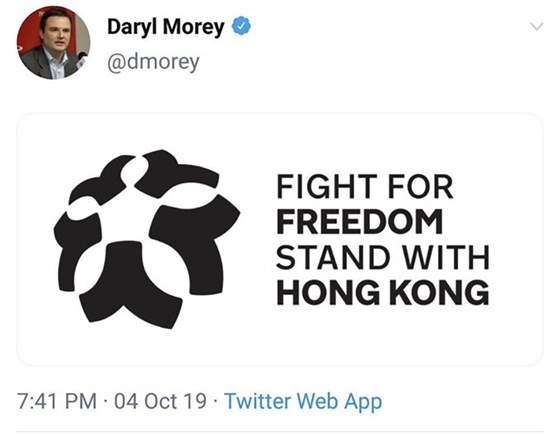 The question Prof. Mair discusses is: What's with the logo? Here's what the Stand With Hong Kong Facebook page says:

After Daryl Morey reposted our logo in an effort to #StandWithHK and Hongkongers' ongoing fight for freedom and democracy, the Chinese state intimidated both him and the NBA into silence. But what does our logo actually mean?

Our logo consists of the Chinese character for "person/people (人)", repeated five times and converging from around the globe on one place—Hong Kong. The number five represents the five key demands made by protesters in June 2019. The form of the logo resembles the shape of an opened umbrella, a well-known symbol of the democracy movement. It also brings to mind the bauhinia, a flower native to Hong Kong and its official symbol.

We created this logo to raise international awareness of the situation in Hong Kong. Hongkongers across the world stand united in our fight for freedom, building on a long history of protest and resistance.

We are not afraid of intimidation & censorship. Fight for Freedom. Stand with Hong Kong.

Will you join us and #StandWithHK?

P.S. NBA, don't you think our logo looks like a team huddle? This is part of the meaning of the design as well.