Reducing the national incarceration rate is a test of our political will.  Keeping a lot fewer people behind bars might well lead to an uptick in crime, especially if we release more inmates without paying for the support they need for successful reintegration once they are released (more on this in the next post).  And the reform efforts to date suggest that our commitment to reducing the prison population may not be matched by our willingness to take the risks necessary to make it happen.  This can been seen most clearly in our treatment of those who commit violent crimes.

Many (although by no means all) of the reform efforts in the states and by the federal government concentrate on reducing the fact of incarceration or the sentence length for those who commit property crimes or drug offenses.  This is hardly surprising.  Violent people scare and enrage us, making the decision to lock them up for long periods more palatable.

For the same reason, proposals to release those convicted of violent crimes earlier, through shorter sentences, easier access to bail, or increased sentence credits, are politically difficult, because the retributivist feelings stirred by these crimes is higher, which in turn makes it harder to argue that it is "unnecessary" to keep these offenders behind bars.  And from a strict numbers standpoint, there are far, far more property and drug crimes committed than violent crimes, so if our goal is inmate reduction generally, it is entirely reasonable to focus on those convicted of non-violent crimes, and to say little about murderers, sex offenders, and armed robbers.

Even if we skip past the problems of drawing lines between violent and non-violent crimes (a frequent and unsatisfying source of litigation), there are two problems with excluding violent criminals from reform efforts.

First, if our goal is to reduce the population of inmates who are being held "unnecessarily," because they present a low statistical risk of reoffending (an idea mentioned in an earlier post), drawing a bright line between violent and non-violent criminals is hard to justify.  In an extensive study of recidivism of state prison inmates, the Bureau of Justice Statistics found:

It is probably appropriate and inevitable that we exclude some violent criminals from reform efforts on retributivist grounds, regardless of their likelihood of reoffending.  The point here is simply that categorically excluding violent crime from reform proposals may be based on exaggerated assumptions about the risks of doing otherwise.

The second problem with focusing on non-violent inmates is a practical one: the numbers suggest that we are unlikely to escape a world of mass incarceration without doing something about violent offenders.  At the end of 2016, the state U.S. prison population looked like this:

Prison Inmate Population by Most Serious Crime of Conviction

As these figures show, excluding violent criminals from reform efforts would make the de-population task even more daunting than it already is.  Leaving the jail population aside, if we want to reduce the prison population by say, 20% we would need to release or divert from prison something like half of the drug offenders and weapons violators, and perhaps a third of the thieves and burglars.  (And even then, we would still have the highest rate of incarceration among the world's top-10 economies.)

The problems of excluding violent-crime inmates from reform efforts gets more complex when we add considerations of race and ethnicity.  As reported by the Bureau of Justice Statistics, African Americans and Hispanics are already over-represented in inmate populations compared to their numbers in the general population, and the numbers get worse if we focus on violent crimes.

Sentenced prisoners under jurisdiction of state correctional authorities, by most serious offense (as of Dec. 31, 2016) 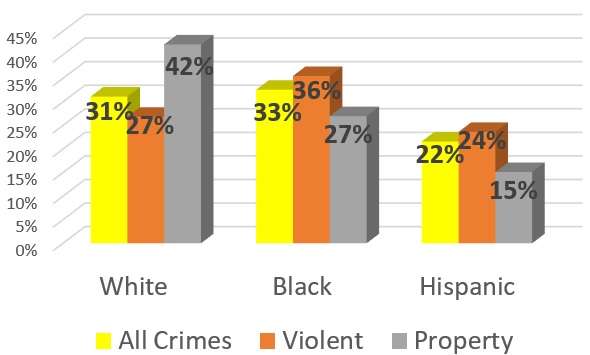 As the chart shows, African Americans and Hispanics are more likely to be imprisoned for violent crimes than for property crimes—in contrast to Whites, where the opposite is true.  So if we decrease the percentage of those in prison for property offenses only, we will necessarily increase the percentage of those behind bars for violent crimes.  As a result, even if the net impact of reform efforts is to reduce the total number of prisoners, excluding violent crimes from these efforts is likely to make the racial and ethnic imbalance worse rather than better.

In his terrific book, John Pfaff warns that "[u]ntil we accept that meaningful prison reform means changing how we punish violent crimes, true reform will not be possible."  He's right, and perhaps the so-far successful efforts at reducing the population of mostly non-violent offenders will pave the way for a second wave of addressing violent offenders.  But we should neither assume nor underestimate the political will needed to take this second step, nor should we be surprised if it turns out that our entirely justified fear of violent crime and our feelings about those who commit them lead to a different calculation about the importance of reducing mass incarceration.

Did These Three Officers 'Willfully' Deprive George Floyd of His Constitutional Rights?