[The discussion in this post is excerpted from Andrew Leipold, Is Mass Incarceration Inevitable? 56 American Criminal Law Review 1579 (2019).]

In a prior post I suggested that there were significant barriers to reducing the size of America's prison and jail populations, a necessary step if we are to overcome what is now routinely called "mass incarceration."  This is the first  of three posts dedicated to addressing those barriers.

But first, it is worth taking a minute to discuss what we mean by mass incarceration.  We know that the label at least means that we have "a lot," and "too many" prisoners, but after that it gets murky.  Given the amount of crime in the US—over 1.2 million violent crimes and almost 7.7 million property offenses in 2017—it is hard to say how much is too much.  As John Pfaff neatly put it, "'mass incarceration' essentially boil down to claims that we have too many people in prison, although we don't really know how many too many; and that we should reduce that number, although we don't really know what the new goal should be."

Nonetheless, we have a couple of measures that might lead us to think that the current rate is too high.  The first is that in the last half century we have been incarcerating at a dramatically higher rate than we did for the half century before that.  In 1925 the prison incarceration rate was about 100 inmates per 100,000 people in this country, a figure that remained steady for about 50 years.  But from the mid-1970s until about 2010, the rate rose about 500%, with the jail population rate (which wasn't reliably measured until the mid-1980s) following a similar path. 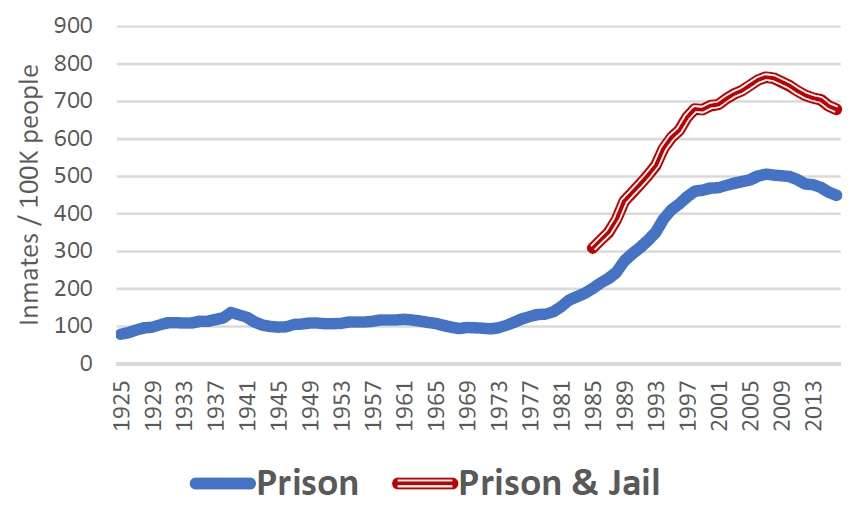 There actually may be less to these trends than meets the eye.  As Bernard Harcourt has explained, although the prison and jail rates have soared over the last 50 years, the overall institutionalization rate has not.  In the middle part of the century (when the prison rate was low), there were a large number of people who were involuntarily committed to psychiatric institutions—550,000 in 1950, or roughly one-quarter of today's prison and jail population.  By the 1990s, however, when prison populations were climbing, deinstitutionalization of those with mental illness had reduced the numbers of involuntary psychiatric patients to a mere 30,000. 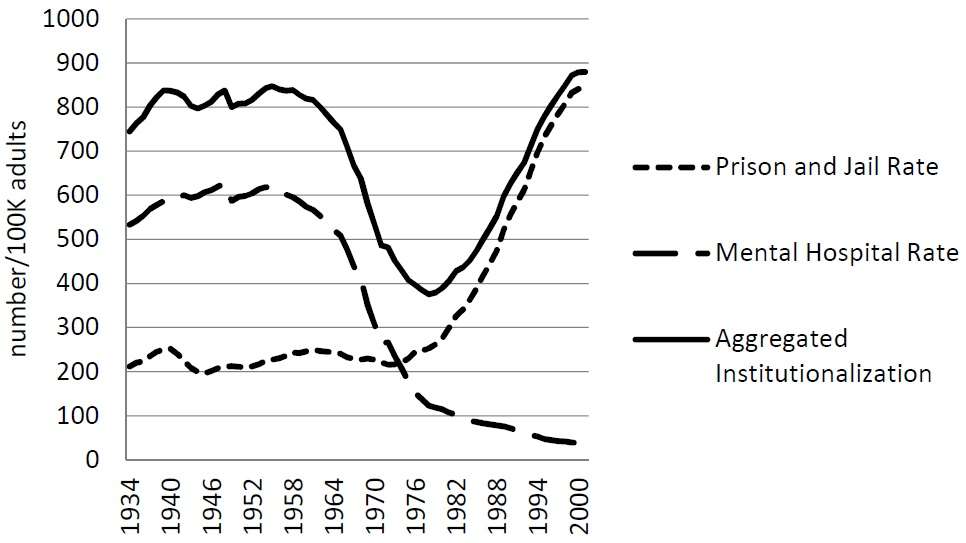 (Many thanks to Professor Harcourt for giving me permission to reproduce this chart.)

Whether and how this information should change our thinking about mass imprisonment is an intriguing question.  But ultimately, even if the growth in prison and jail inmates is not as straightforward as the numbers suggest, the core point remains, and is perhaps strengthened.  Prison and jails are designed to punish and detain, and their rapid growth is cause for concern, even if it is explained in part by a shift from treating large number of people as criminals rather than patients.  More pointedly, if addressing the prison size requires targeting those who are behind bars unnecessarily, then inmates with (potentially) treatable problems might be an excellent place to start.

There is a second metric that is at least suggestive of a problem:  comparing the U.S. incarceration rate to those of other countries.  The U.S. incarcerates an estimated 655 inmates per 100,000 people (although this is based on 2016 numbers, so the current number will be smaller).  And as we look down the list at the rest of the top five, we do not see countries that we would normally compare ourselves to.  The country that incarcerates at the second highest rate is El Salvador (604 inmates/100k people), followed by Turkmenistan (552), the U.S. Virgin Islands (542), and Thailand (524).

Outside of the U.S. and Thailand, the countries with the highest incarceration rates in the world are quite small.  So perhaps a more useful comparison is between the U.S. and other countries with large economies.  Some are democracies, some are not, but using economic size to define a peer group ensures that we are looking at counties with roughly comparable resources to address social problems.  Making this comparison shows that the U.S. now widens its lead in the incarceration race, and by a hefty amount.

Incarceration Rates for Countries with the Largest Economies.

Even in the absence of a precise definition of "mass incarceration," these numbers strongly suggest that there is something unusual and problematic about our approach to criminal punishment.

Putting ask the political challenges and resource constraints that will hamper the efforts to reduce the incarceration rate (more on these in the next two posts), the sheer size of the task makes it almost inconceivable that the U.S. will either return to rate more in line with our earlier history, or will rejoin the pack of other large-economy countries.

Consider the following.  For the U.S. to reduce its incarceration rate to the average rate of the other top-10 economies (144 per 100,000 people, as shown in the table), it would have to cut its rate by a staggering 75%.  Stated differently, the U.S. could empty every state and federal prison in the country, leaving only inmates in the local jails, and still be above the world average.  (There were roughly 745,000 people in U.S. jails in 2017, for a rate of 229 inmates per 100,000 people—higher than any other top-10 economy other than Russia and Brazil.)

Alternatively, we might set a goal of cutting our incarceration rate to a point that is more in line with our past.  Returning to the rate that existed in the middle part of the last Century, 100 inmates per 100,000 people, seems fanciful.  (Or as Jeff Bellin has put it, "we are closer to landing an astronaut on Pluto than we are returning to 1970s incarceration levels.")  Even a return to 1990s levels, which would require a 20% to 25% reduction in current incarceration rates, would be difficult.  And even if we could achieve this more modest goal, the U.S. would still have the seventh highest incarceration rate in the world (overall) and still have the highest rate among the countries with the largest economies.

In short, if "mass" incarceration is defined in relative terms—how we compare to the rest of the world—or in reference to historical incarceration rates in this country, no realistic amount of sentencing and criminal law reform is going to change the distinctive space the U.S. now occupies.