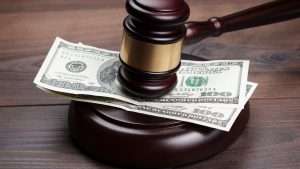 Another common scenario arises from asset forfeiture policies under which police forces get to keep the profits from assets  confiscated from owners on the theory that they may have been used in the commission of a crime – including in many cases where the owner was never even charged with an offense, much less convicted. In many jurisdictions, asset forfeitures are carried out with little opportunity for owners to challenge the seizures. The problem has been exacerbated by the Trump Administration's reinstatement of the "equitable sharing" program, under which the federal government helps state and local police forces circumvent state law limitations on asset forfeitures, and thereby keep more loot for themselves.

If it is a violation of due process for judges to indirectly profit from their own rulings, the same reasoning applies to cops who similarly profit from the fines and asset forfeitures they impose on citizens. In fairness, one can argue that conflicts of interest on the part of police and other law enforcement officers are not as egregious as those that involve judges, because the former do not make final decisions about the fate of the accused. But, in many situations, decisions by police have an enormous impact on the outcome, especially given that judges and prosecutors often defer to the police on various issues. That is particularly true in the case of asset forfeitures, where procedures make it extraordinarily difficult for owners to recover their assets once police have made the initial decision to seize them. Like judges, police exercise enormous discretion over the fate of suspects – discretion that should be free of self-interested temptations that are likely to bias the decision-making of "the average man."

As the Fifth Circuit explains, the legal principles involved here have deep roots in the Anglo-American legal tradition's conception of "due process." But they are also just basic common sense. It's dangerous to have judges – and police officers – who stand to profit from imposing fees and fines on people, or from seizing their property. Not because judges and cops are unusually bad people, but because they are subject to the same temptations as the rest of us.

NOTE: I clerked at the Fifth Circuit many years ago (for a judge who was not on either of these panels). I know both Judge Ho (who clerked for the same judge as I did, two years before me, and helped interview me for the clerkship position), and Judge Jones (whose chambers were down the hall from those of my own judge). I do not believe these connections bias my views of the two cases – both of which were decided long after I ceased to be a Fifth Circuit clerk. But I thought I would note this history here, nonetheless. A post about conflicts of interest should probably err on the safe side in such  matters!