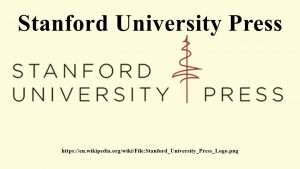 University presses periodically face threats to the financial support they receive from their universities. Such support is crucial, leaders of academic publishing say, because university presses publish work with scholarly significance, knowing that impact must be measured in ideas shared or conventional wisdom challenged, not commercial standards on book sales.

But even if such threats occur periodically, many academics were stunned and angry to learn that Stanford University has announced that it will no longer provide any financial support for its press. Professors at Stanford are pushing back, but there are no signs that the university will reconsider.

Without support from the university, dozens of books released by the press each year would no longer be published.

"At first glance the proposition that a university of Stanford's stature would voluntarily inflict damage upon an asset like the Stanford University Press seems shockingly improbable. The press is a world-class scholarly publisher with a 125-plus-year history—a global ambassador of the university's brand," said Peter Berkery, executive director of the Association of University Presses, via email.

"It appears the Stanford administration is proceeding from the misperception that university presses are self-funding—which, with only a handful of highly circumstantial exceptions, is demonstrably not the case."

As the Chronicle of Higher Education explains (article unfortunately behind paywall), Stanford University Press brings in some $5 million in annual revenue from its books and other publications, but nonetheless depends on the approximately $1.7 million in annual subsidies from the university in order to make ends meet. The article also notes that SUP's need for subsidies is in part driven by the University's refusal to allow the Press to raise money from major donors.

The Chronicle reports that Stanford Provost Persis Drell suggested that the money could instead be spent on graduate fellowships. But it also notes that it would in fact fund only about three such fellowships per year. That seems like a small price to pay for continuing one of the world's leading academic publishers.

The sum of $1.7 million is a lot of money to you and me. But it's actually a fairly small amount for a university with a massive endowment and a $6.3 billion annual budget. Unlike commercial publishers, academic presses are not intended to make a profit. Their task is to publish works that contribute to our knowledge of important issues, but don't necessarily attract a large readership.

Stanford UP has a well-deserved reputation for being one of the top handful of academic in several fields, including my own fields of law and political economy. Among my favorite significant Stanford UP books are Martin Redish's Judicial Independence and the American Constitution  and Terry Anderson and Peter Hill's The Not So Wild, Wild West: Property Rights on the Frontier.   The latter book reshapes our understanding of both the "Wild West" (showing it was a lot more orderly than its image suggests) and the creation of property rights (which is far less dependent on government than usually thought). We need more works like these, not fewer.

Admittedly, I am not a completely disinterested observer. My first book as a law professor, Democracy and Political Ignorance: Why Smaller  Government is Smarter,  was published by Stanford UP in 2013, and has since been widely reviewed, published in a revised second edition, and translated into Italian and Japanese. Stanford took a risk on an ambitious proposal by an academic with little track record for writing books. Importantly, they also agreed to set a relatively low price for the book (going against the standard practice of many other academic publishers), which made it accessible to buyers other than libraries and academics with substantial expense accounts.

Thanks in part to the pricing decision, Democracy and Political Ignorance sold thousands of copies and attracted attention in media outlets around the world. It's an example of SUP's willingness to proceed with projects that might otherwise have been overlooked. It is also, of course, an example of their laudable willingness to publish books that advocate positions at odds with prevailing political opinion in the academic world, and among most of the Press's own editorial staff. Anderson and Hill's excellent book, mentioned above, is another example of SUP's commitment to ideological diversity.

While my SUP book had the good fortune to turn a profit, many worthwhile academic books, however, are unlikely to be profitable in the same way. Their audiences may be unavoidably limited to experts in the relevant field.

I should add, also, that SUP's editorial and production work on my book—led by law and anthropology editor Michelle Lipinski—was exemplary. Since 2013, I have had the opportunity to work with several other leading academic publishers, and I know whereof I speak on this point. I have heard similar praise from other SUP authors.

Stanford is a private organization and has the right to set spending priorities as it wishes. Reasonable people can disagree about the value of some of SUP's specific expenditures and publication decisions. But largely gutting Stanford University Press would be a major mistake.

UPDATE: This update is a brief response to objections that my critique of Stanford's decision is somehow inconsistent with libertarianism, because it  criticizes the decisions of a private institution and urges it to continue funding a money-losing enterprise. Nothing nothing in libertarianism forecloses arguments in favor of continuing (or even expanding) a nonprofit enterprise that does not make money—especially if making a profit is not the point of the enterprise in the first place. For reasons noted in the post, academic publishers rarely make a profit, which is why most are organized as nonprofit institutions in the first place.

Libertarianism is a political theory that favors voluntary cooperation over state coercion, not a theory which holds that the only worthwhile enterprises are those that make a profit. Still less is it a theory which holds that private institutions never make mistakes when they decide to curtail some activity of theirs. Such mistakes are, in fact, especially likely in the nonprofit world, where the value of output is harder to measure. I am not arguing that the government should force Stanford to change its policy, or that Stanford UP should be bailed out with state or federal funds; merely that the University should voluntarily reconsider its position.