After close to 30,000 infections, 15 reported deaths, and more than one million doses of vaccine, it appears as though the widespread nature of the U.S. monkeypox outbreak may be nearing an end.

The most recent data from the Centers for Disease Control and Prevention (CDC) show a seven-day average of seven new monkeypox cases per day. This is a massive decline from the more than 400 cases per day reported during the height of the outbreak in late July and early August. Though, to be clear, it may be some time before we have no cases of monkeypox in the U.S. at all. 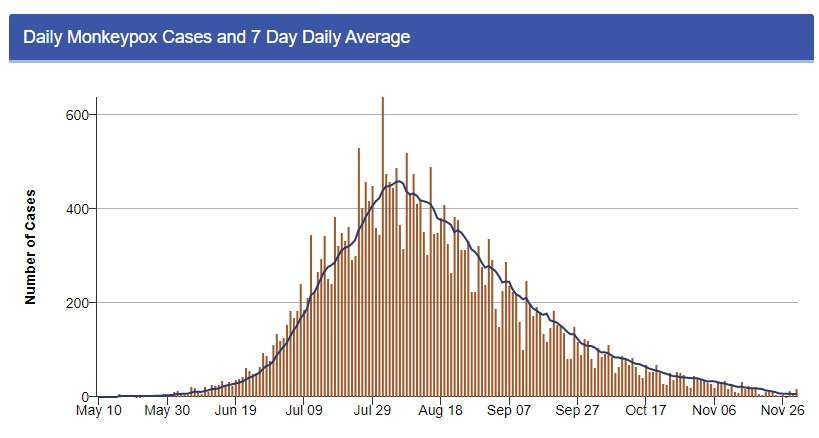 There are several explanations for this success, some more obvious than others. The most obvious: This strain of monkeypox was overwhelmingly spread between men who have sex with other men. While monkeypox is technically not a sexually transmitted infection—it can be spread through physical contact with rashes and sores of an infected person—this particular strain seemed stubbornly resistant to nonsexual spread. Los Angeles County data, for example, shows that only 43 of the 2,388 confirmed cases were in women. So, the number of demographic groups at risk of infection was much lower than the number at risk of catching COVID-19.

The second most obvious explanation: Vaccinations became available—eventually. The CDC reports more than 1.1 million doses administered across the country over the summer. And the vaccines largely worked. They weren't foolproof. A small number of vaccinated people nevertheless got monkeypox. But the CDC calculates that unvaccinated people who engaged in the same behavior as the vaccinated people were 14 times more likely to get monkeypox.

A less obvious explanation for the decline is simply that once people got monkeypox and recovered, their resistance to reinfection is likely very high. It's not like COVID or other respiratory illnesses that can quickly adapt and mutate into different variants; it's more like smallpox. Experts believe that this resistance will last for decades, if not the rest of a person's life. Monkeypox is simply less likely to keep ping-ponging through communities than COVID.

And finally—and probably most importantly but even less obvious—people who realized they were most at risk of infection temporarily changed their behavior. A survey from August of men who have sex with men showed half of them reduced the number of sex partners and anonymous sex through apps or parties because of the potential for infection. I can anecdotally confirm that many sexually oriented parties and activities for men to connect in California were canceled over the summer. Some did still happen, but often organizers scaled them back and took precautions to reduce the risk of monkeypox spread.

Ultimately, we did see 15 deaths in the United States. One death in Virginia was just announced today. Worldwide, there have been 59 reported deaths from monkeypox. It could have been worse, but it still could have been better. There are lessons to be learned here that can be applied to other health crises.

First of all, just as with COVID-19, government bureaucracy and red tape threaten lives in the event of a public health crisis. While monkeypox began spreading only in major population centers, it ended up spreading all across the country partly because it took so long for the Food and Drug Administration and the Department of Health and Human Services to actually get vaccines that were in storage in Denmark to the United States. The drop in new infections almost perfectly matches the arrival of vaccines in the U.S. Just think of the potential impact of this slow response had this strain of monkeypox spread just as easily among sexually active heterosexuals or in a nonsexual capacity.

Second, getting the proper messaging to the proper people matters. Yes, when monkeypox first hit the U.S., it was correct to warn that it could spread across the population in any number of ways. But once it became very clear who was at greatest risk and that the virus never really broke out of its primary demographic, it was very silly to keep dithering around the reality that men who had sex with men were at the greatest risk. Yet, even as the U.S. started getting a handle on monkeypox, it was very difficult to get some health officials to speak honestly.

As we saw with COVID-19, when government officials aren't honest about risk factors and spread, they lose the people's trust and appear incompetent.