The public is only beginning to understand the full extent of alleged crimes committed by Sam Bankman-Fried (better known as SBF), a cryptocurrency entrepreneur who lost billions of dollars after his exchange, FTX, was revealed to be little better than a Ponzi scheme. SBF's net worth plunged from $10 billion to effectively nothing in the course of a few days. He has declared bankruptcy and was recently questioned by the police of the Bahamas, where he resides.

John Ray III, who was brought in to manage Enron following that company's self-destruction in 2001, is now the CEO of FTX. In a court filing last week, he said he has never seen such "a complete failure of corporate control," including at Enron.

"From compromised systems integrity and faulty regulatory oversight abroad, to the concentration of control in the hands of a very small group of inexperienced, unsophisticated and potentially compromised individuals, this situation is unprecedented," he said in a court filing.

SBF engaged in extreme levels of deception to trick people into thinking FTX was worth more than it was. He effectively paid investors, employees, and vendors shares of the company—his token, FTT—and loaned out money to his quantitative investment firm, Alameda Research. It was an elaborate house of cards that apparently fooled investors, celebrity sponsors, and politicians: SBF interviewed former President Bill Clinton and and former Prime Minister Tony Blair at a crypto conference he hosted back in April.

Tony Blair and Bill Clinton on the same stage (and SBF.) You don't see that very often these days, eh? pic.twitter.com/Vt5pn6egHn

SBF was heavily involved in Democratic Party politics: In the 2022 election cycle, he was the second most prolific funder of Democratic candidates after George Soros. But he wasn't just a funder of electoral efforts. He funded both progressive and mainstream media organizations.

I wrote earlier today that there's a huge question over whether SBF will be able to continue funding media going forward.

Grants have gone to:

According to the journalist Teddy Schleifer, SBF gave money to Vox, the progressive news web site created by liberal bloggers Ezra Klein and Matt Yglesias. (Vox Media also owns several other outlets, including New York magazine.) SBF made a $3.25 million grant to The Intercept, which at the time of FTX's fall had already received $500,000 and was due to get the rest in the coming years. Acting editor-in-chief Ryan Hodge notes that SBF's bankruptcy will leave The Intercept with a significant hole in its budget.

SBF also gave money to Semafor, a new journalism project created by Ben Smith, formerly the media columnist at The New York Times and, before that, the editor in chief of BuzzFeed. And when FTX crashed, SBF was in the process of giving ProPublica a whopping $5 million. This was ostensibly in support of research to better understand the origins of the COVID-19 pandemic and to prevent future pandemics. And indeed, ProPublica's reporting on these subjects is well worth reading.

But SBF's own attitude toward his funding of these causes seems to be that it's all for show. Here's how he described "ethics" in Twitter DMs with a Vox reporter: 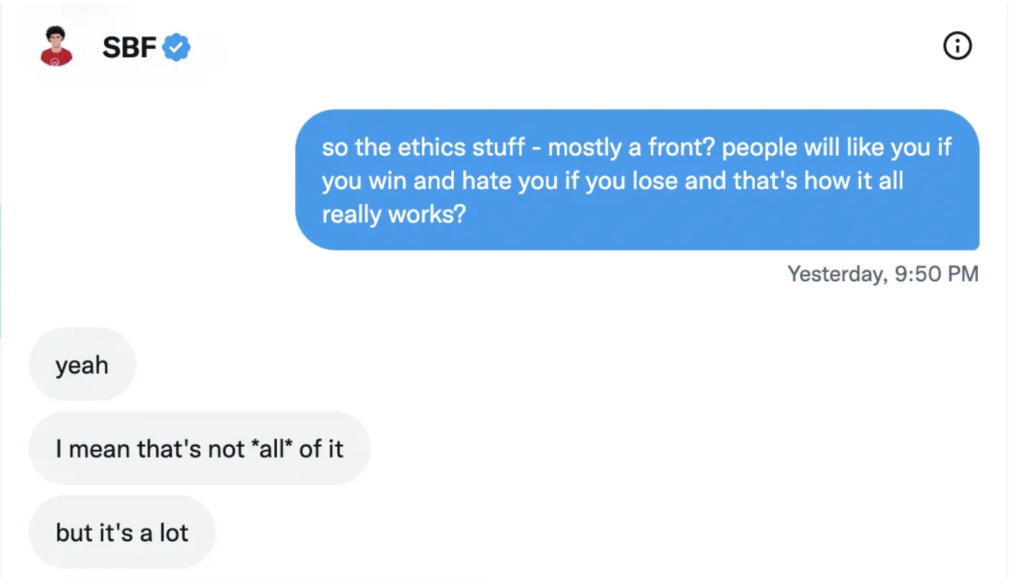 When asked if ethics is "mostly a front", SBF replied "yeah…that's not all of it but it's a lot."

If SBF considered his generous donations to be a "front" for something else, one wonders what about the else. Is it perhaps the case that SBF thought he was actually buying goodwill and favorable coverage? He was, as it happens, the beneficiary of countless gushing magazine profiles and was frequently hailed as the "white knight" of crypto.

Indeed, SBF is still benefitting from some kinder-than-expected coverage from the mainstream media, even in the wake of the revelations about his fraudulent activities—and even from outlets that did not receive his largesse. The New York Times' report on this disaster uses soft, passive language to disguise blame at every turn. This is the outlet that treats nearly every development in the tech sector as an existential threat to democracy, yet its summation lets SBF write his own verdict. Expanded too fast? Failed to see warning signs? He defrauded people out of millions of dollars! The empire didn't collapse of its own accord; it collapsed because its foundations were fraudulent.

Meanwhile, The Washington Post's reporting on this subject has centered on SBF's "pandemic prevention" spending. "Before FTX collapse, founder poured millions into pandemic prevention," writes the paper. "Most of those initiatives have come to a sudden halt."

Neither The New York Times nor The Washington Post were among SBF's beneficiaries, but it is striking how gingerly they have treated him thus far. These are both outlets that have sounded quasi-apocalyptic notes about how tech companies like Facebook and Twitter are ruining journalism, promoting misinformation, and undermining democracy. One hopes they wouldn't treat Bankman-Fried with kid gloves out of admiration for his philanthropy.

Matthew Yglesias, the Vox cofounder, wrote in a recent Substack post that he had previously met with SBF and declined a business opportunity with him, even though he obviously shared SBF's enthusiasm for various causes, including "effective altruism." Yet Yglesias's coverage laments that without SBF's lavish funding of Democratic causes, it is "plausible" that "Trump would still be in the White House."

These are some fairly kind words for a person accused of vast financial misdeeds that rival Enron in scope—a person who has all but confessed that his ethical giving is intended to cloak a win-at-all-costs mentality.

Most of the news figures and outlets mentioned in this piece have produced praiseworthy journalism in the past, and the fact that they took money from a charlatan doesn't change things. But for all the progressive and mainstream fretting about the potential for billionaires like Mark Zuckerberg and Elon Musk to corrupt the news cycle, the coverage of SBF is more than a little blasé.