Despite the increasing number of near-total abortion bans being enacted across the nation, it seems that support for absolutist anti-abortion policy has been cratering among American voters—and these bans only seem to be becoming more and more unpopular, especially among Republicans.

On Thursday, the Public Religion Research Institute (PRRI), a nonprofit research group, released its findings from its 2022 American Values Survey, an opinion poll covering a wide range of topics and political attitudes. The 2022 survey showed a deepening of an already-existing trend—the decline in support for abortion being illegal in all circumstances. The data show the number of Americans who support banning abortion in all cases declined from 13 percent support in September 2020 to just 8 percent support in September 2022.

While the PRRI survey shows that anti-abortion absolutism has declined amongst Independents and Democrats since 2020, the shift pales in comparison to the decline in Republican support for the policy.

Based on a figure released by PRRI, Republican support for total abortion bans appears to have declined approximately 10 percentage points since 2020, with the speed of the decline in support only increasing over polling periods. 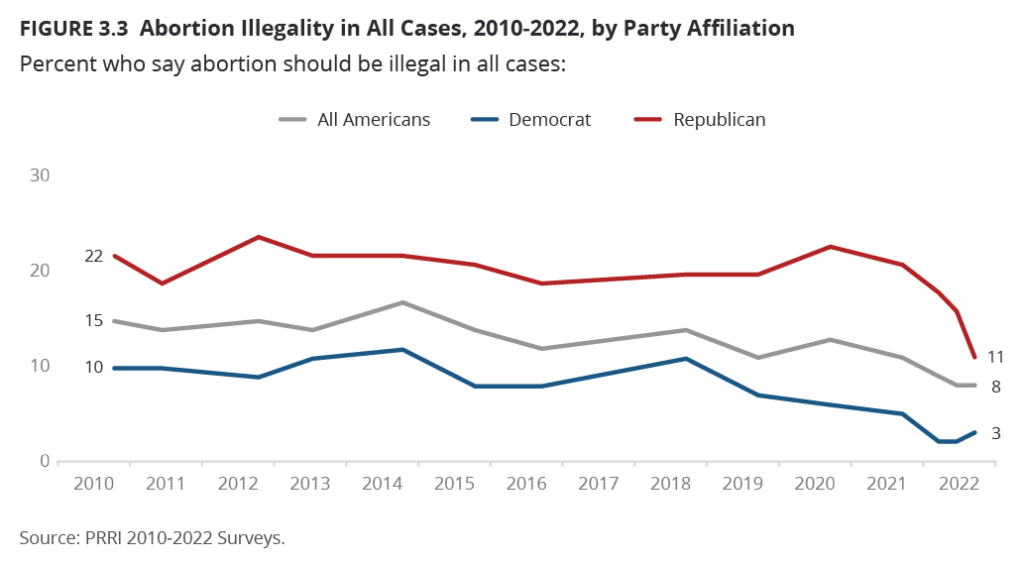 While PRRI has not published precise numbers for each year on the support for total abortion bans among different political groups, the figure it published with this year's survey appears to show a precipitous drop in support for total abortion bans among Republicans—especially after Roe v. Wade (1973) was overturned last June. This shift appears to indicate waning support for the kinds of absolutist anti-abortion laws now favored in many red state legislatures.

We can't know for sure why support for total abortion bans is declining among Americans, but such a dramatic shift may be the result of a kind of buyer's remorse. In past years, many Republicans may have supported absolutist anti-abortion policies without sincerely believing that such policies could ever be enacted because of the protections of Roe v. Wade. But now that Roe is overturned and total abortion bans have become legal, some of their less popular effects have been on full display. Stories of women being denied medically necessary abortions have gained considerable public attention since Roe was overturned. And the story of a 10-year-old rape victim's inability to get an abortion in Ohio sparked national outrage in July.

However, the figure shows that the decline in Republican support for anti-abortion policies began in 2021, not June 2022. Thus, while post-Roe policy changes may account for the most dramatic decline in public opinion, it doesn't account for all of it.

We also don't know the possible impact this will have on voter behavior. According to PRRI, Republicans are less likely than Democrats (21 percent as opposed to 35 percent, respectively) to only vote for candidates that share their views on abortion. So, while this shift in opinion is certainly not good news for staunchly pro-life Republicans, it is likely not a cause for panic for the party as a whole. Though perhaps the dramatic decline in Republican support for total abortion bans may lead to more moderate anti-abortion legislation from the party.

Drug Shortages? Ham-Handed Pandemic Interventions Deserve Much of the Blame