President Biden formally unveiled his student loan debt forgiveness plan on Wednesday, and will use his executive authority to cancel up to $20,000 of debt for borrowers who make less than $125,000 per year.

"When I campaigned for president, I made a commitment that I would provide student debt relief," said Biden. "I am honoring that commitment today."

Biden will cancel $10,000 of federally held student loan debt for all borrowers who make less than $125,000 a year, and $20,000 for recipients of Pell Grants, which are need-based. The policy will impact up to 43 million people and cost the government at least $300 billion (in all likelihood, it will cost much more than that). Ultimately, U.S. taxpayers—many of whom did not take out loans to pay for school—will be on the hook for the money. A very conservative estimate of the cost per taxpayer is $2,100.

According to Biden, forcing all Americans to help pay the debts of college borrowers is an unfortunate necessity; people who borrowed from the government to go to school are just that badly off. They are ruined, they are desperate, and they need generous U.S. taxpayers to bail them out.

"An entire generation is now saddled with unsustainable debt in exchange for an attempt, at least, at a college degree," said Biden. "The burden is so heavy that even if you graduate, you may not have access to the middle-class life that the college degree once provided."

This is quite an indictment of the federal student loan program, so one might have expected that Biden's generous debt forgiveness plan would be accompanied by serious reforms to the underlying system that produced such inequities. After all, the government is conceding that its loan program has scammed millions of desperate people. Their situation is so dire, their prospects of repayment so dim, that Biden is requiring everyone else to pitch in and help them.

But no, Biden's debt forgiveness plan will do nothing—absolutely nothing—to fundamentally change the incentive system that created the doom spiral in the first place. Degree-seekers will continue to borrow large amounts of money to buy useless educations; indeed, they might feel even more encouraged to do so now that this precedent has been set.

Meanwhile, colleges and universities will have even less incentive to lower costs. Economic researchers have often found that the government's subsidized student loans cause educational institutions to jack up their prices for obvious reasons: If the feds cover the cost on the front end, no matter what it is, universities have every incentive to raise the sticker price. Forgiving student loan debt exacerbates this problem since it encourages more reckless borrowing. Indeed, the Committee for a Responsible Federal Budget estimates the cumulative student debt level will return to current levels in just a few years. 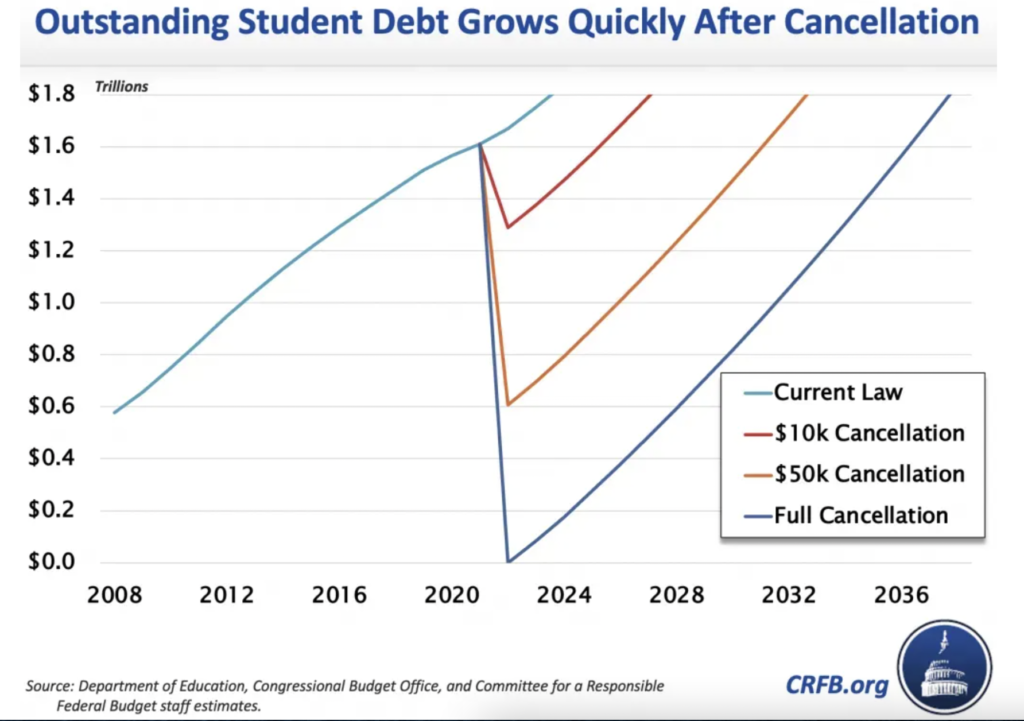 There are structural incentives that push students to borrow money that they can never hope to pay back, and the fact that so many people have fallen into crippling debt is a compelling reason to change these incentives. No rule says the federal government must lure people down a path that leads to financial ruin with some frequency. Congress can sharply limit, or even end, this practice.

A one-off cancelation of some level of debt held by borrowers who happen to be in dire straits at this specific moment does nothing to fix the underlying problems; on the contrary, it exacerbates them. It is a slap in the face to everyone who either paid down their college debt or made different educational choices to avoid accruing it.

If Biden wanted to make the strongest conceivable case for forgiving some college debt, this course of action needed to be paired with serious changes to the entire higher education system. Otherwise, he is simply engaged in a vast transfer of wealth, taking hard-earned money from those who did not fall prey to the federal government's scam and awarding it to those who did.