Fallout from the Mar-a-Lago raid? A man attempted an attack at an FBI field office in Cincinnati on Thursday. The assailant, Ricky Shiffer, tried to enter the visitor screening area around 9:15 a.m., wearing body armor. When stopped by security, Shiffer fled, taking off up the nearby I-71 highway.

The FBI says Shiffer was "armed" when he tried to enter the building, but it's unclear with what he was armed. CNN says he was carrying a nail gun and an AR-15 rifle. NBC News reports that he fired the nail gun before he fled.

Shiffer was later spotted by an Ohio state trooper who tried to pull him over, prompting a police chase that eventually ended in an hourslong standoff in a rural county between Cincinnati and Columbus. Shiffer reportedly raised a gun at police, who shot and killed him.

An account for "Ricky Shiffer" on the Trump-backed social media website Truth Social posted yesterday morning "well, I thought I had a way through bullet proof glass, and I didn't. If you don't hear from me, it is true I tried attacking the F.B.I., and it'll mean either I was taken off the internet, the F.B.I. got me, or they sent the regular cops while." The message ended abruptly.

The account—now disabled by Truth Social—"said Shiffer was a construction mechanic in Columbus, Ohio," notes USA Today. "A search of public records identified a 42-year-old Ricky Shiffer in Columbus."

People, this is it. I hope a call to arms comes from someone better qualified, but if not, this is your call to arms from me. Leave work tomorrow as soon as the gun shop/Army-Navy store/pawn shop opens, get whatever you need to be ready for combat. We must not tolerate this one. This time we must respond with force. If you know of any protests or attacks, please post here.

In a subsequent message, the account proposed killing the FBI on sight: 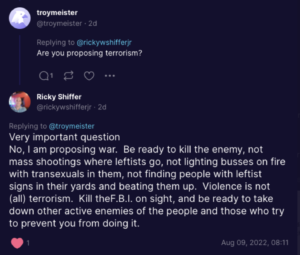 The Associated Press says "there have been growing threats in recent days against FBI agents and offices across the country after federal agents executed a search warrant at Mar-a-Lago."

The latest news on the raid includes allegations that there were classified documents related to nuclear weapons among those seized from Trump.

Attorney General Merrick Garland said yesterday that he "personally approved the decision to seek a search warrant in this matter," and announced that the Department of Justice had filed a motion to unseal the warrant for the search.

Trump said last night in a statement: "Not only will I not oppose the release of the documents, I am going a step further by encouraging the immediate release of those documents."

See also: Democrats Don't Trust 'the Police,' but They Do Trust the FBI, Provided It Is Targeting Donald Trump

More evidence that Elon Musk isn't the free speech warrior that many think he is:

One thing I noticed from Elon Musk's counterclaims against Twitter: it shows how little he actually cares about free speech, and his willingness to embrace authoritarian crackdowns on free speech. https://t.co/5SNYxi9xWD

A new working paper looks at the effects of the #MeToo movement:

NEW WP ????: How did collaborations between men & women change after #MeToo?

• The Federal Election Commission wants to ensure you get more spam mail:

The program would exempt these emails from "forms of spam detection to which they would otherwise be subject."

• The disappearing differences between Republicans and Democrats on federal family spending.

• More on all those new IRS agents.