To hear lobbyists from the steel industry tell it, President Donald Trump's decision in 2018 to impose 25 percent tariffs on foreign steel is just about the only thing keeping American steelmakers in business.

"The domestic steel industry was in a state of crisis" before the tariffs, according to a statement submitted by the Steel Manufacturers Association in advance of tomorrow's U.S. International Trade Commission hearing focused on the economic consequences of those tariffs (and others) four years after they were imposed. "The industry was in a tailspin," a separate statement from Nucor, one of America's largest steelmakers, argues.

But data Nucor submitted along with that statement seems to call into question some of those dramatic claims.

For example, here's a chart showing the American steel industry's monthly capacity utilization—a measurement of how much production capacity is running every month—with an added red line showing when the tariffs were imposed. See if you can find the "tailspin" that necessitated an expensive government intervention: 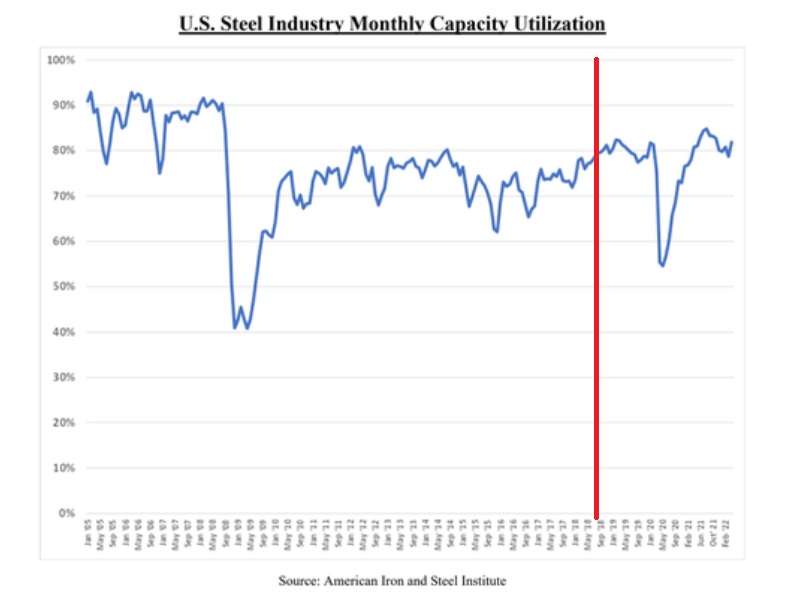 Lobbyists from steel companies like Nucor and trade groups like the Steel Manufacturers Association are set to testify at Thursday's hearing alongside small businesses and other trade groups that have been harmed by the higher prices created by the tariffs Trump imposed and that Biden has maintained. Those tariffs have shielded the American steel-making industry from some foreign competition, boosting profits and allowing for some marginal growth in terms of capacity and employment.

Those marginal gains have been offset by huge increases in steel prices—increases that have been passed along to steel-consuming industries and, ultimately, to consumers.

Before the tariffs were imposed, a 40-foot-by-60-foot steel building would have cost about $25,000, according to General Steel Corporation, which turns raw steel into finished products. Now, that same structure would cost more than $30,000.

"This puts U.S. industrial users of steel in a tough position of deciding how much of the steel cost increase to pass onto their customers," Buehrer wrote in testimony submitted to the ITC in advance of tomorrow's hearing. "Pass along too much of it and risk losing business to foreign competitors who have access to steel at half the U.S. cost. Pass along too little of it and your factory generates insufficient revenue to cover its cost which is not a sustainable situation."

"Any gains seen by the steel industry from the tariffs have been overshadowed by the losses in the companies downstream," sums up Stuart Speyer, president of Tennsco LLC, a Tennessee-based metal fabrication firm, in testimony to the ITC.

Rather than engage with the realities created by tariffs—including higher prices that have rebounded through the economy and helped stoke inflation—the steel industry's approach to the ITC's review relies on denying that the problem even exists.

While critics of the tariffs have claimed downstream industries and consumers are bearing higher costs, the Steel Manufacturers Association argues in its filing with the ITC, "the reality is that these measures have supported the steel industry's recovery without any meaningful negative impact on either consumers or inflation."

The word "meaningful" is doing a lot of work there, considering the piles of anecdotal evidence—from businesses like the ones owned by Buehrer and Speyer—and academic studies that have concluded the exact opposite. Indeed, in the very next sentence of the group's testimony, the Steel Manufacturers Association admits that tariffs resulted in rising steel prices (the group argues those increases were only temporary).

If you discard higher prices as a "meaningful" impact of tariffs—which exist only to force prices to rise—then it is easy to look at the past four years and conclude that American steelmakers have reaped the benefits of a protectionist trade policy with no significant trade-offs. But that's an obviously misleading assessment of the past four years—one that the ITC ought not to believe.