GoFundMe calls Freedom Convoy an "occupation." What started as a protest against vaccine rules for border-crossing Canadian truckers has morphed into a massive—and more than a week long—demonstration against all sorts of COVID-19 mandates in Canada. Things have been largely peaceful, but the city of Ottawa is declaring a state of emergency and the crowdfunding platform GoFundMe is refusing to turn over millions of dollars raised for the protests.

"GoFundMe supports peaceful protests and we believe that was the intention of the Freedom Convoy 2022 fundraiser when it was first created. We now have evidence from law enforcement that the previously peaceful demonstration has become an occupation, with police reports of violence and other unlawful activity," the company declared in a statement.

Initially, GoFundMe said donations whose makers did not request a refund would be sent "to credible and established charities chosen by the Freedom Convoy 2022 organizers." In an update, it said that "due to donor feedback," it would "automatically refund all contributions directly—donors do not need to submit a request."

That means more than $8 million will be refunded, reports The Washington Post. Since the GoFundMe rejection, protesters have raised $3.5 million on the Christian crowdfunding site GiveSendGo.

GoFundMe said it's rejecting Freedom Convoy funds because the protest violated its terms of service—specifically, a prohibition on "the promotion of violence and harassment." But it's unclear to what exactly GoFundMe is referring.

By all accounts, the protests—which have included thousands of Canadians in multiple cities—have been mostly nonviolent. Ottawa Police Service reported Sunday that they've seen "extremely disruptive and unlawful behaviour" from protesters. But when they spell out what this means, most of it is relatively minor stuff. For instance, Ottawa cops issued 450 tickets for infractions that include "excessive noise," fireworks displays, seatbelt violations, disobeying a sign, an "improper muffler," an obstructed license plate, driving on a suspended license, running a red light, and "driving through a no truck route." 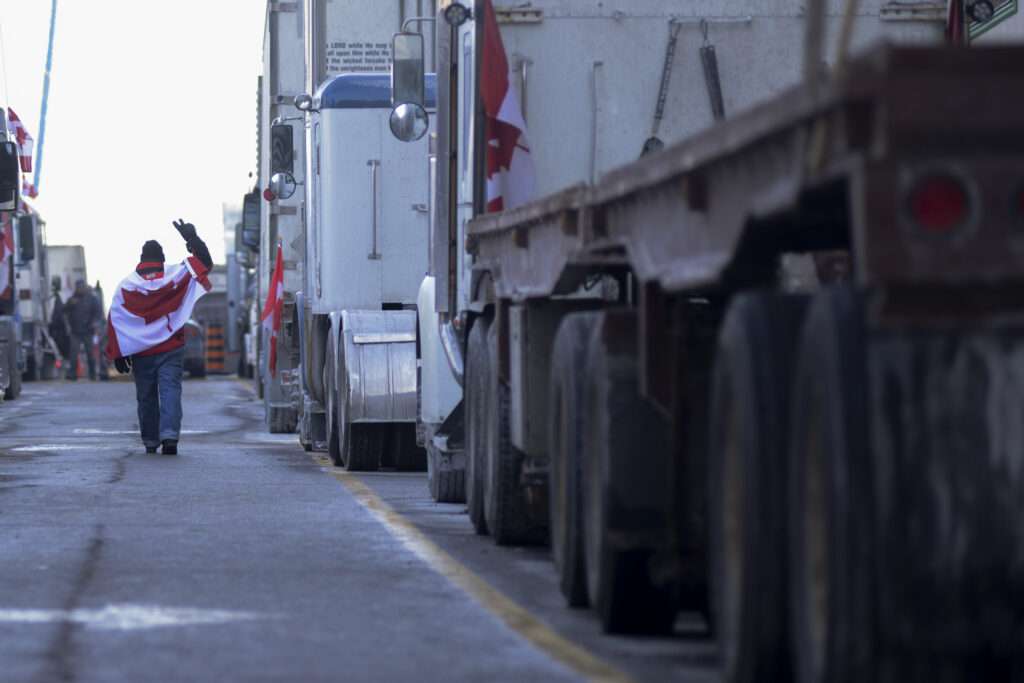 Criminal offense investigations have been opened, but these seem to have led to relatively few arrests. On Sunday evening, OPS said that it had opened "over 60 criminal investigations so far related to the demonstration." It reported just seven arrests—five people were arrested for unspecified "mischief," one "for mischief relating to property damage of a downtown business," and another "for driving while prohibited."

OPS also reports investigations into hate crimes, but does not offer more details. A special hate-crime hotline it set up "received over 200 calls, and Detectives are ensuring every report is investigated," the OPS statement said.

Several incidents of harassment by demonstrators have been reported. But a few alleged bad apples in a mix of thousands of protesters spanning cities seems extremely weak rationale for the GoFundMe cancellation.

One serious incident has been alleged in the days after GoFundMe's decision: an attempted arson. But this event has not been substantiated (and some of the claims surrounding it are a bit far-fetched).

As a private company, GoFundMe can associate with whatever causes it wants. But the move is, nonetheless, disappointing. It feels very much like a pretense to disassociate from a cause that's critical of government and unpopular with political leaders.

Protester James MacDonald told CNN that "the whole event has gone beyond just vaccines and it is now about the entire ordeal," including mask mandates, lockdown measures, and more. The truckers are now joined by all sorts of folks, and the protests have spread beyond their original locale in Ottawa to cities throughout Canada, though the bulk of the action remains in Ottawa.

On Sunday, Ottawa's mayor declared a state of emergency. "Declaring a state of emergency reflects the serious danger and threat to the safety and security of residents posed by the ongoing demonstrations and highlights the need for support from other jurisdictions and levels of government," said the city in a statement.

Is Web3 a scam? "At its most basic, Web3 imagines a massive shift away from the habit of accessing the web via centralized platforms such as Facebook and Google, and toward a norm of communicating, storing information, and making payments through a supposedly incorruptible, uneditable, fail-proof system," notes The Atlantic's Kaitlyn Tiffany. "But for various reasons it has so far been a bit of a farce."

"Spotify's decisions about Rogan (and Young and others) has absolutely nothing to do with Section 230. At all," writes Mike Masnick. In case you've been living under a rock: Neil Young and several other perfomers have removed their music from the digital listening platform Spotify to protest the company's ties to the popular podcaster Joe Rogan. The musicians initially threatened to go if Spotify wouldn't ditch Rogan's show; Spotify wouldn't.

Some—including Los Angeles Times reporters, tech writer Kara Swisher, and the activist group Sleeping Giants— have linked this fight to Section 230, a law that protects websites and other digital mediums from certain liabilities for user-generated content. "But the question of Spotify's decision to keep Rogan or not has nothing to do with Section 230 at all," notes Masnick:

Spotify has every right to decide whether or not to keep Rogan in the same manner that a book publisher gets to decide whether or not they'll publish a book by someone. And that right is protected by the 1st Amendment. If someone sued Spotify for 'hosting Joe Rogan,' Spotify would win easily, not using Section 230, but for failure to state any actual claim, backed up by the 1st Amendment right of Spotify to work with whatever content providers they want (and not work with ones they don't).

A lot of people want to find a way to blame Section 230 for Spotify's right to host Joe Rogan. But as with so many instances where Section 230 is blamed, what they're really mad at is the First Amendment. It's just that saying one hates the First Amendment and doesn't believe in free speech isn't so popular, so people try to complicate matters by invoking a law that many people either don't know about or don't understand, and are trying to act as if this comes down to tech companies having some sort of special rights.

Masnick points out that if Section 230 didn't exist, Spotify would still have a First Amendment right to air whatever music and podcast it chooses and cut deals with their creators:

Spotify, just like a publishing company, a newspaper, a TV cable news channel, would have a 1st amendment editorial right to determine who to allow on its platform and who not to. 230 doesn't create a right to editorial discretion (both up and down). That already exists thanks to the 1st Amendment.

Indeed, if you're thinking that Spotify might somehow be liable if someone gets hurt because they listened to someone spreading stupid advice on Rogan's podcast, that's not going to fly—but, again, because of the 1st Amendment, not Section 230. As Section 230/1st Amendment expert Prof. Jeff Kosseff explained in this great thread, book publishers have (multiple times!) been found to be not liable for dangerous information found in the books they publish.

• An A.P. investigation into a federal prison for women in Dublin, California, "has found a permissive and toxic culture at the Bay Area lockup, enabling years of sexual misconduct by predatory employees and cover-ups that have largely kept the abuse out of the public eye."

• Rising mortgage rates are unlikely to thwart inflation in the housing market.

• An Illinois judge has ruled against the state's masks-in-schools mandate.

• That feeling when you agree with ice cream:

You cannot simultaneously prevent and prepare for war. ⁰⁰We call on President Biden to de-escalate tensions and work for peace rather than prepare for war. ⁰⁰Sending thousands more US troops to Europe in response to Russia's threats against Ukraine only fans the flame of war.

The CDC's tiny footnote for cloth masks says that the data for it was "not statistically significant." https://t.co/9ezUJnXaFt

More on that mask research and its flaws here.